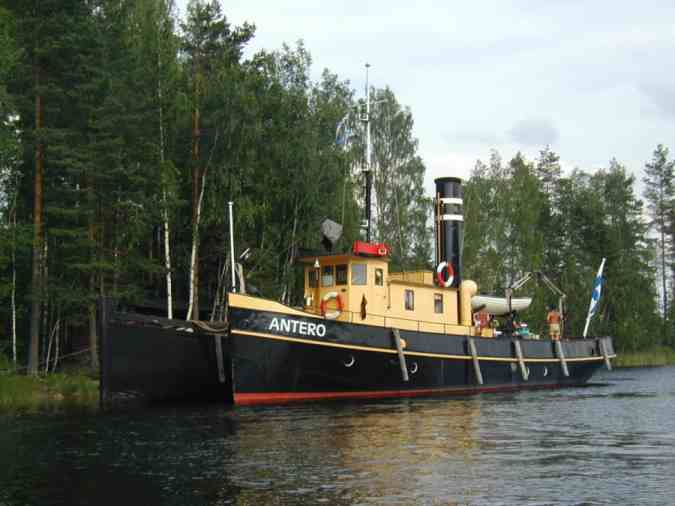 At the time of the steam locomotives, the state railways had a fairly large fleet on various waterways, taking care of the supply of logs used by the locomotives as fuel. For this purpose, in 1924 it ordered “Anteron” from the Lehtoniemi workshop, which was named after VR’s Lappeenranta district forester Antero Penttinen. The main designer of the ship was Yrjö K. Railo. However, Antero’s machine and boiler are older than the ship, dating from 1914. They have apparently been dismantled from a two-engine cargo ship called the “Wood”, which for one reason or another was converted into a barge quite soon after its completion. Antero’s machine is exceptionally “left-handed”, ie its controls are on the left side of the machine. The fate of the other machine is unknown.

When completed, Antero began towing log barges to the ports along the railway line, at different times to Lappeenranta, Savonlinna, Varkaus and Kuopio. In these ports, the halos were then loaded onto train wagons to be moved around Finland. In addition to trains, the State Railways Fuel Office took care of the heating needs of state-owned properties such as hospitals and barracks. In 1945, outsourcing took place, which resulted in the creation of Vapo, or the State Fuel Office. VR’s ships also moved to it, and so Anterok got the letters VAPO in its chimney instead of the letters VR. The chimney emblem of both had brass letters on a black background and white stripes at the top and bottom of the cuff.

As Vapo’s need for shipping decreased due to, among other things, the transition to diesel locomotives, Antero remained standing on the shore of the Luukka shipyard in 1958, until it was sold in 1961 to the Löydö sawmill in Ristiina. There, it towed logs for the sawmill’s needs, as well as cellulose chips for the Kaukopää mills on barges called “Pulmio” and “Tapio”. After the sawmill closed down in 1965, Antero remained on the sawmill’s dock for eight years. From there, it was bought by new owners in 1972, who restored the rather dilapidated ship to traffic as early as the following summer. The all-white chimney emblem during the discovery sawmill was now written in black A&A, which was later replaced with brass letters in the black-and-white cuff, as in the time of VR and Vapo.

The owners’ original idea was to move the ship to Päijänne, where they had previous experience of sailing. However, the transfer would have been expensive for the young shipping company, and so the ship remained in Lake Saimaa, which has not had to regret. In the early years of the current shipping company, Eetu Ojansuu, Antero’s first engineer, visited Antero to greet and reminisce about the old days. Eetu told a lot about Antero’s early days, including the following funny story: “When I got tired of driving Antero in the dark until the ice came, I wrote a letter to VR’s intent: Intent devil! If I don’t get electricity for Antero, then I don’t drive in the dark. Signature: Eetu Ojansuu. The curator was up to date and apparently also a humor man, so he replied to Eetu: Eetu damn! That’s where you get the electricity. Signature: Intent ”. This is how an electric machine came to Antero in 1928. Also interesting is the story that the electric machine (i.e. the turbine and generator package) was taken from an imperial train where it was then an empty pledge.

Since 1978, Antero has most often been seen on the side of Enso-Gutzeit’s former log barge “Ilma”. The Air, built in 1936, was originally intended as a liner for a line tug, ie a log warehouse to be kept on the side. Anteroha didn’t need one, as a lottery tug she ate straight from the load. Today, it’s much more than a lunch box, it brings plenty of much-needed extra space to an otherwise rather cramped tug. Antero is still sailing on Lake Saimaa.