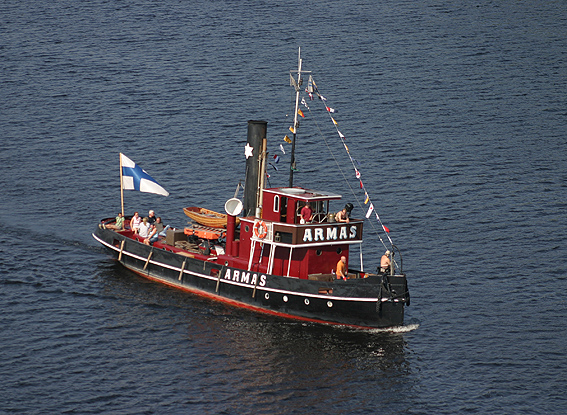 Armas was originally built in 1908 at Paul Wahl’s workshop for Enso Träsliperi Aktiebolag, founded by Baron C.A. Standertskiöld 1889 On the shores of the Räikkölä rapids in Vuoksi. The founder ‘s idea was also to name the company Enso as an alternative to the name Enso, which later grew up around the company. The ship was given the name “Other”, apparently because it was the company’s second steamer. Previously, Enso had been built for the company, which also still exists and is registered in the Finnish Steam Sailing Association. However, Standertskiöld was only served by “Another” for a few years – in 1911 he sold his company A.B. To W. Gutzeit & Co. Ships also moved in the trade. Enso was allowed to keep its name, “Another” was named Armas according to Armas Salovaara. Gutzeit once used to name his tugs after his staff.

After the Second World War, Armas was one of the 35 civilian tugs on Lake Saimaa to be deployed by the state-founded clearing fleet in 1945 to clear mines from the Gulf of Finland, one of the most densely mined sea areas in the world. There is a case left in the records since those times when “a horned head (sea mine) knocked on the bottom of Armas and popped out unexploded in the wake. But a towed ship followed, and the mine bumped into it too – and still didn’t explode. However, a couple of clearers did not survive the situation of lifting hair without losses. The sailor at the helm of the towed man lost his temper and jumped into the sea. Even quick rescue operations no longer helped. ” The last of Saimaa’s ships were not returned to their civilian duties until 1948. However, this huge demining contract, the “naval war reparation”, was carried out with honor.

Armas ’work in commercial traffic ended like other Gutzeit ships in the late 60s and was sold for private use. These towed Armas from Laitaatsilla to Puumala, but did not drive it on their own machines. It was bought from them in 1973 by new owners. From 1983, Armas sailed the waters of Lake Saimaa for another 15 years, until it was sold to the Porvoo Association of the Mannerheim League for Child Welfare in 1998. The vessel was transferred to Porvoo, where the association organizes various sailings with it.