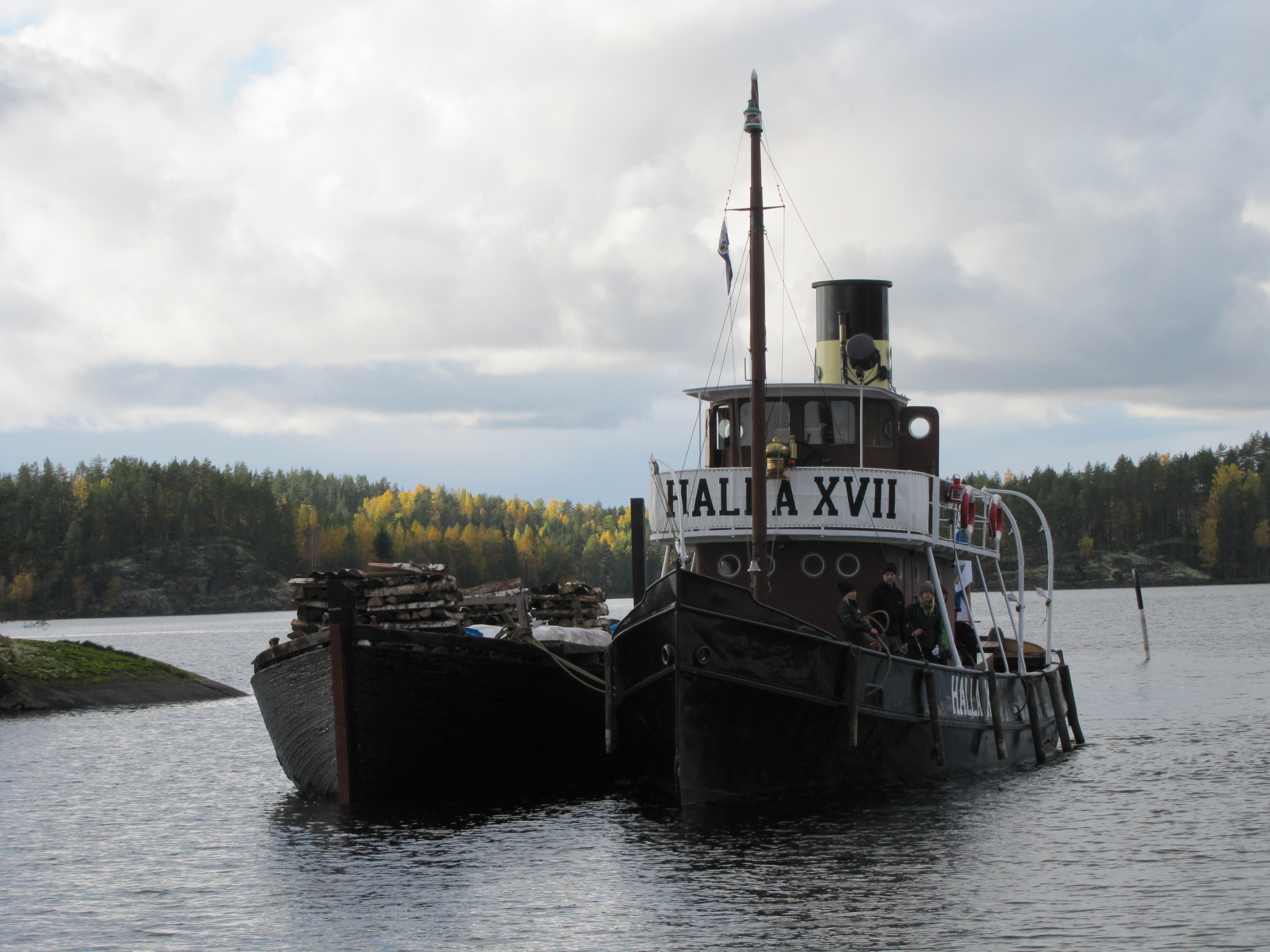 Halla XVII was originally built in 1908 as a steam tug for the use of Halla Limited Liability Company at the Kotka workshop under the leadership of engineer Aleksander Grefveberg. At that time, the company lived through strong new buildings, and its four strongest tugs were completed at Kotkan Rauta Oy’s shipyard in 1905 (Halla VI), 1908 (Halls VII and XVII) and 1911 (Sirius). The first three of these operated mainly in Saimaa, Sirius at sea in the Kotka region. The Halla tugs mentioned were quite similar to each other, with “Seventeen” being slightly smaller than the other two. Halla VII was honored to serve as the company’s representative vessel. The engine power of the Halla XVII was originally 175hp, but a couple of years later a new boiler was installed, which increased the power to 192 horsepower.

XVII operated primarily in Saimaa, but also in Kotka if necessary, towing e.g. lumber in barges from the island of Halla to ships waiting on the red. In Kotka, it usually operated in the autumn, when the majority of Saimaa’s floats had been made, while in Kotka there was enough work. At least in 1929 and 1935 it overwintered in Kotka on the island of Halla at the shipyard. With the completion of the sawmill’s new loading dock and 7-meter fairway, Halla XVII remained permanently in Saimaa as a line tug. In Saimaa, “Seven” towed cable cars from Joensuu or Heinävesi to the south-east of Ristiina to Orraintaipale, from where the owner, who had already become Kymi Osakeyhtiö at the time, moved timber from Saimaa to the Kymijoki watershed.

Halla XVII had an occupation of 9 people: the master, the mate, the engineer, the engineer, two heaters and two deckhands, and the hostess. After the bridge was built on the ship in the 1930s, the skipper kept his tent in the bridge cabin. In the large cabin under the bow deck lived the mate and the engineer, in the smaller cabins the engineer and the hostess. The rest of the crew stayed in the aft cabin. On the deck level were the dining room, kitchen with wood stove and toilet. The ships were kept in good condition, including the brasses being polished regularly. Major maintenance and repair work was usually carried out at the company’s own shipyard in Mikkeli, Germany, where the ships also spend the winter, sometimes also at the Savonlinna machine shop, next to which the company had its own service pier.

Significant repairs were made to the ship in the mid-1960s, but towards the end of the decade it remained like its counterparts. It first moved to Armas Makkonen’s cottage shore in Ikoinlahti, where it was bought in 1971 by a new owner who had been looking for a steamer for a few years. Already in his youth, the man, who had been “bitten by a steam fly,” had previously coveted two Enso Gutzeit ships, namely Väinö and Arma, which, however, went sideways. The owner painted the ship white – to the dismay of many – justifying the choice of color on the grounds that “old sailors said the pleasure boats are white”. He was accurate about who was selling his eyeballs, but eventually a suitable buyer was found in 1989. This had been involved in sailing and building sailboats, but got a steam spark after visiting the Steam Yacht Club booth at a boat show. The deals were set up quite easily, the new owner, accustomed to the price world of sailing ships, found the price request quite affordable. Since then, it has become clear to him that it may not have been so affordable in the end, maintaining the ship when it requires quite a lot. However, the street has not needed shops.

The ship got new owners in 2015, these have done extensive renovations to it and restored it to its original colors. Halla XVII, which has rather small log warehouses for its size, has also brought barge Päivi to bring more space. Today, the ship’s home port is in Puumala.