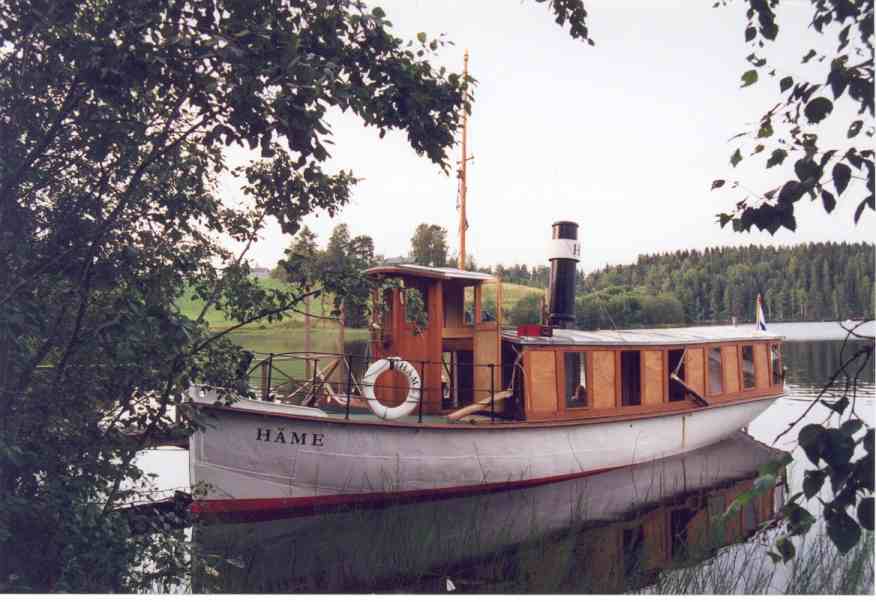 The ship was ordered in 1903 from the Tampere machine factory (Sommer, Af Hällström & Waldens Oy) by Lauttakylän Höyryvene Osakeyhtiö, the purpose of which was to carry passengers and goods along the Loimijoki and Kokemäenjoki rivers between Lauttakylä and Kyttälä railway stations. According to the original drawings, it was an open ship with only a canopy made of corrugated sheet metal to protect passengers. The maximum number of passengers in the drawings is 42. Apparently, soon after its completion, changes were made to the ship, with the construction of walls and a rudder on the front deck to protect the passengers. After the changes, it was a small unmanned passenger ship typical of the time, where passengers sat on the sides of the engine room and on hard wooden benches placed behind the aircraft. The ship was named after the place in the usual way: it was named “Lauttakylä”. The route was apparently profitable, as the ship remained on it until 1928. Admittedly, not without a break, as it was submerged in the heat of the Civil War in 1918 by blowing up the bottom of the Loimijoki. However, it was decided to lift and repair back to traffic, but only to freight traffic and pull logs. In passenger traffic, it was replaced by the “Tiira” built in Tampere in 1896, acquired by the company.

In 1929, the company put its assets up for sale. Both its vessels and barges were sold to the farmer Kustaa Erkkilä, from whose estate their journey continued in 1933 to Hämeenlinna to the Häme Plywood Factory. They were transformed into tugs, with Lauttakylä receiving the name “Häme”. A towing arch was installed on its roof and the color changed from white to black. In addition, the number of windows on its sides was halved when half of them were replaced with plywood boards. It was tasked with towing birch logs to meet the company’s factory needs, with the longest towing distances all the way to Längelmävesi. With the exception of the shutdown in the war years 1941-43, towing continued until 1953, when Häme remained standing during extensive renovations. After the renovations, with new deck structures and electric lights, Häme returned to traffic in 1955, albeit only momentarily. In the summer of 1957 it was no longer used, and the following summer it was sold to the Lahdenta sawmill in Tyrvyö.

In Tyrvallia, Häme became tasked with towing logs for the sawmill, but for one reason or another it was no longer inspected after 1959, although it continued to operate until non-inspection was maintained. Now Häme was left standing on the shore of the sawmill, where it eventually sank. Häme returned to public consciousness in 1990, when it was sold to private ownership at an auction at the sawmill in 1992.

Häme, who was in poor condition, demanded a complete renovation, which lasted a decade. At the shipyard set up in the yard of the summer cottage, most of the hull was renewed, as was most of the arches. The new deck structures were made according to the old model, utilizing the old roof structures. The original machine could still be refurbished – even though it had been half submerged – but the boiler had to be replaced. Fortunately, a similar type of “Cornwall” boiler happened to be found. However, it also required renovation. Much of the boiler’s equipment came from an old boiler, although water glasses had to be found. Such were later found in Joutseno, the old boiler of s / s Ansio. The machine and boiler were finally put into working order in the autumn of 2001, and a test run was allowed. The following summer, road transport to Tampere, which proved to be quite laborious, followed, where the ship was lowered in mid-July 2002 to its current home water, Lake Näsijärvi. In accordance with old traditions, the captions painted on the bow of the ship were kept covered until launch. During the ten summers, Häme has proven to be a stable ship with good navigation characteristics.