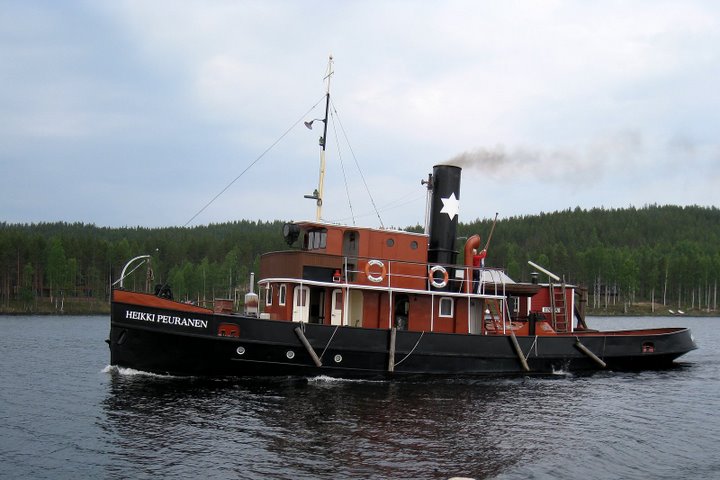 The ship was originally built in Vyborg at the Gallen workshop for the Russian Imperial Navy, which it served at the Kronstadt naval base as a gunboat called “St. Petersburg”. To fit under the Neva bridges, the ship was made shallow: it had no fixed railings, its deck structures were low, and the mast and chimney could be folded if necessary. The bow and stern decks had cannons, and the rudder and cauldron were protected by a strong armor plate. In addition to the Neva, the vessel’s area of ​​operation was the Baltic Sea (ER77).

In the heat of 1917, the ship ended up in the independent Finnish state, which in turn sold it to Enso Gutzeit Osakeyhtiö. This underwent extensive alterations, including the construction of fixed railings and deck structures. It was then added as a line tug to the company’s large fleet and got its current name after the company’s former forest manager. (ER77) Heikki Peuranen, equipped with a triple plane, was one of the company’s strongest tugs. Due in part to his powerful aircraft and on the other hand to his good pumps, Gutzeit was also happy to use Heikki Peura for various rescue missions, while Gutzeit lifted other ships in addition to his own if needed. (K2010) However, Peurase’s main task was long-distance line towing of log ferries.

Hugo Larsson, an engineer who became Gutzeit’s naval commander in 1921, described the line towing of bundles in 1930 as follows: “A long-distance tug must have at least 250 ind. a horsepower machine, because then it is able to beat the raft when towing even relatively strong winds. After such a tug, you can safely place a bundle board with about 25,000 logs and it will take about 8 days to tow from Joensuu to the Rutola sawmill, for example. The distance between the ferry route is 353 km. The time also includes the empty journey from Rutola to Joensuu, but it has been assumed that during that 8 days the towing will take place continuously, except for the stop at Laitaatsilla when the ferry is moved from the water above the bridge to the water below. In recent years, the towing speed of the ferry has varied between 1633 m and 2565 m, averaging 2018 m per hour. These figures are averages for towing 775 ferries and 14 tugs of different strengths have been used for towing, with ind. hev. the force is between 144-350. – – It should also be noted that the ferry must travel at a distance of approximately 225 meters from the tug, at which point the propeller current of the tug will no longer impede the forward movement of the ferry. However, this can only be done on backwaters. In narrow spaces, the distance must be shortened as necessary, as the maneuverability of the ferry must be closely monitored at all times. ”

In mid-June 1941, Heikki Peuranen was recruited by the army. Initially, it mainly took care of the evacuation transports, but after the start of the war, like some other Saimaa tugs, it was assigned to Vuoksenniska as a kind of emergency department. Most of the time I stood in the port of Niskalamm, sometimes there were different local times. In the early weeks of the war, Soviet bombings were fierce in the region. Ville Suomalainen, who was the deck man, recalls: “They were bombed by a hall. The planes flew and even the deer cover was followed by a machine gun shower, so the paint went off ”. The end of the summer went from Peuranen mainly in military transport tasks, e.g. for fortification work in various places. During the war, Heikki Peuranen returned to the atmosphere of his early days, even in the sense that an anti-aircraft gun was installed on its deck.

After the wars, Heikki Peuranen returned to his daily toil as described above to tow bundle ferries. It worked for the company until 1968, when it was sold to private ownership. The typical equipment of a long-distance line tug included a barge towed on the side of the ship, a “lunch container,” from which the tug received the firewood it needed on the way. On the side of Heikki Peuranen, its lunch container “Enea”, which has followed Peuran in changes of ownership, still faithfully follows. It brings extra space to the ship and is bad for a sauna.