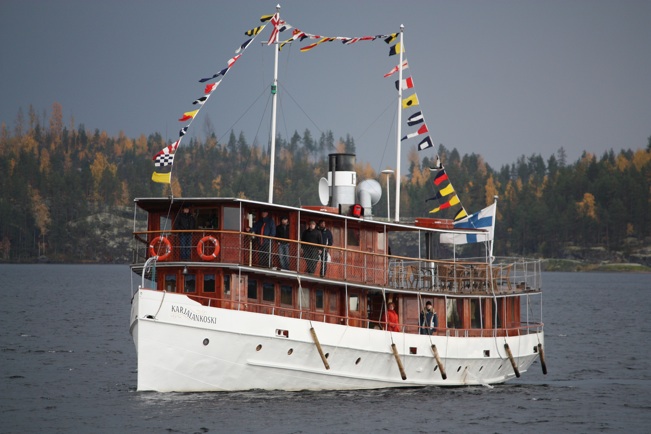 Passenger ship traffic on the Muuruvesi route, which is about 45 kilometers long, between Kuopio and Karjalankoski, began in the 1860s. In 1897, “Kosken Höyrywenhe Osakeyhtiö” was established in the area, which acquired a ship called “Koski” from the Lehtoniemi workshop. In 1903, it bought a second-hand ship called “Lempi”, which, however, became smaller as traffic grew. So the company decided to order a new ship from Lehtoniemi as early as 1904. The ship, named “Karjalankoski”, arrived from Lehtoniemi to Kuopio on June 1, 1905. The newspaper Pohjois-Savo praised the ship as very comfortable and nicely decorated, mentioning that it had electric lights and 18 berths. The speed is mentioned as 20 kilometers per hour. The magazine also mentions that the ship was also designed for icebreaking. Originally single-sided, Karjalankoski was changed to double-sided in 1914. Today it is “one and a half-sided”. Among the reforms, the boiler, which was replaced in 1936, should also be mentioned.

Karjalankoski, together with Koski, continued on its route for an unusually long time. In 1947, when the company turned 50 years old, the solvent Koski company believed that, despite the competition from car traffic, it could maintain regular traffic on the lines it had originally operated. However, optimism proved to be overestimated, especially when Karjalankoski burned almost completely on May 9, 1948. The captain of the ship died in the fire. It was decided to repair Karjalankoski, but the renovation was expensive for the company. In addition, the Jännevirta bridge, completed in 1947, significantly increased the competitiveness of car traffic. The cessation of freight traffic on the “main line” of the Juankoski factory in 1949 reduced the cargo revenue of ships. The deterioration of the company’s financial result forced the sale of another ship, the “Kosken”, as a tugboat in 1952. It was later returned as a passenger ship and is still in use in Kuopio cruise traffic, albeit as a motor ship.

The end of the Koski company was near, and the traffic in Karjalankoski ended in 1957. The vessel was sold to private owners. It later operated mainly on charter and cruise traffic until it was sold to a new owner in 1991. When the forces of this began to run out and the time required for maintenance could not be found, the vessel was put up for sale again with a longing mind. The buyers were the brothers from Kuopio, whose initial enthusiasm is described as follows: “I also went to Muuruvee on a guy’s steel boat. There, on one of the piers, I began to talk about finding a Semmonen ship for the whole group of brothers. In a month and a half, it became known that he knew a ship called Karjalankoski, which would be worth doubting. ” The ship was visited and fell in love with it. When a promise was made from a skilled carpenter to carry out the renovation, a purchase decision was made. The ship was moved from Laitaatsilta, where the shipyard’s men repaired its bottom and Lyytikäinen’s cabins, after which the ship was driven with its own planes to Kuopio. A lot has been done, and the ship is now in a representative condition, with Kuopio as its home port.