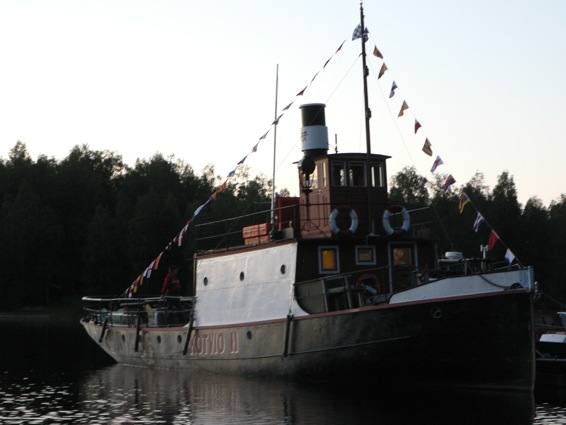 The Rosenlew company from Pori built a tugboat in Näsijärvi in ​​1884 at its own Pori workshop to replace its old wooden tugboat called “Näsijärvi”, built in 1874. The newcomer got its predecessor name “Näsijärvi”, and also its machinery. The wooden frame of the old Näsijärvi was sunk into the shore of Näsijärvi’s Pölkkylänniemi, where its other side is probably still. You could get a good museum object from it. The new Näsijärvi, together with the “Murole” tug built by Reposaari steam sawmill in 1886, was one of Näsijärvi’s strongest tugs, each towing their own company’s log ferries to their own company’s log road to Pispala shore, as the competitors did not like the competition.

It was not until World War II that this log traffic was disrupted. Russia feared a German invasion through Finland, and set up a garrison and navy in Tampere, forcing the largest ships in Lake Näsijärvi, including Lake Näsijärvi and Murole. However, the fleet was empty as a pledge. Some transports of Russian troops were made, but no shots had to be fired by the naval department. The Russian Revolution then ended the story of this naval division. At the beginning of the sailing season in 1918, the Civil War had already been fought and Näsijärvi and Murole continued their daily toil.
In 1935, Lake Näsijärvi was sold to the Kotvio sawmill in Ruovesi, which already had a smaller tug called Kotvio (see Ansio). So the newcomer was given the name Kotvio II. The ship was replaced by a fine 137-person triple steam engine built at Rauma Wood’s large 40-meter sea cargo ship Toivo, originally at the Dunderberg workshop in Tampere. The machine is the last individual in working order from the production of that workshop. Kotvio Oy’s history in 1947 states: “Kotvio II is still our company’s tug and is one of the best tugs in our water system in terms of quality, condition and power, and due to its engine side arrangement, its firewood facilities are on the bow and and use. ” Owned by the Kotvio sawmill, the vessel towed barges loaded with halos and other sawn timber until the decline in floating operations stopped the tugs’ work.

As the floating activity decreased and the ship’s professional traffic ceased, the ship was bought by Olavi Kivimäki, the former foreman of the Kotvio sawmill, to prevent its scrapping. However, no productive runs were found, all the more so. After hearing the city of Tampere looking for a museum ship at a technical museum, Kivimäki decided to sell the ship. He did not think the boiler needed a museum, but sold it to the Iittian Laundry. In the end, however, the museum project did not catch fire, and for years the ship stood uncovered behind the Naistensaari power plant, crumbling, once crashing onto a crane ship. A ban on the export of museum objects in 1984 prevented Germans interested in the ship from purchasing. In the end, Vilppulan Veneilijät Ry was found as a buyer.

The ship, which was in poor condition, was transported to Vilppula, where its renovations began. It was lowered to the water in 1995. However, the acquisition of a new boiler was a particular problem. Initially, the old boiler of the steamship “Inti” was refurbished, but it proved to be too inefficient for the Kotvio II triple machine in terms of steam production. They did not want to find a suitable boiler in Finland, and so a fuel oil-fired boiler built in Sweden in 1977 was acquired. At the end of a long refurbishment contract, Kotvio II returned to service in the autumn of 2002.