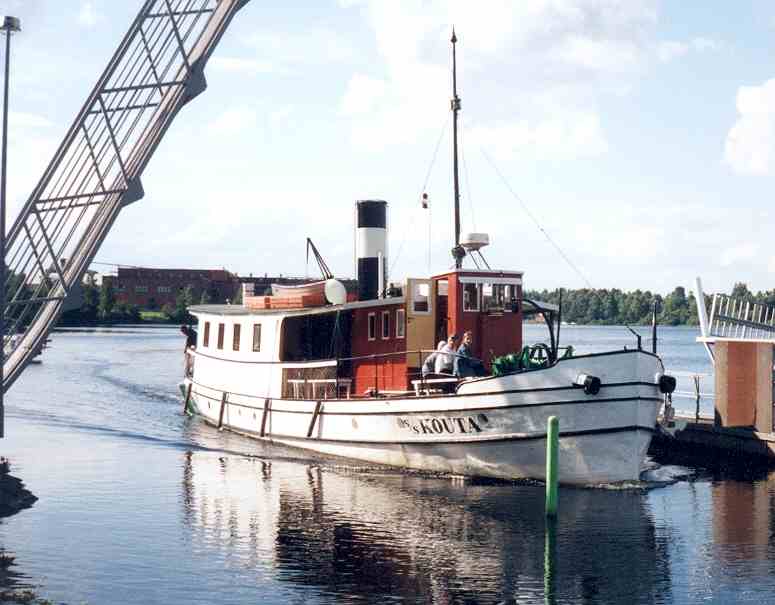 Steamship traffic between Sotkamo and Kajaani began in 1883, when the steamship “Elias” named after Elias Lönnrot, who worked as a district doctor in Kajaani, appeared on the route. However, this became small, and in the next decade, Kajaani merchant Ivan Sergejeff acquired his own “Sotkamo” ship to compete on the route. “Elias” was later sold to Kajaani, which made it a sparrow named Kajaani III. For a long time, Sotkamo was not allowed to be alone on the route, but its competitor was the 1908 Sotkamo route traffic cooperative, which ordered a “Vuokatti” ship from Varkaus, which was allowed to take a hundred passengers and plenty of cargo. Sergejeff did not survive the race in the end, and Sotkamo was sold to Lake Oulujärvi. The Transport Cooperative now ordered a new ship in 1920, again from Ahlström in Varkaus. The ship was completed quite quickly, transported in parts to Kajaani and assembled in Petäisenniska in service condition. Named “Vuokatti II”, the ship was completed during Midsummer in 1921 and began operating from Kajaani to Sotkamo and Ontojoki, ie as far as it was possible for the ship to reach the water body in question.

In addition to the Captain and the Engineer, the crew of Vuokatti II consisted of two heaters and four deckmen. From time to time, the strength also included a chef, but apparently quite often only coffee was available for passengers. Like other passenger ships of the time, Vuokatti II also carried cargo. In addition to merchandise, for example, milk for export to dairies and grain to mills. “There were no household mills or others, so they all spent their grain products in the Kajaani mill grinding,” recalled Eetu Polvinen, who started as a deckman in Vuokatti II in 1926. “And the number of passengers was just that, when there were no such cars in motion,… So it was. Even in the time of Sunday, so it was until the crowds. ” The ship stopped on its route to several intermediate docks, which gathered passengers from more than 10 kilometers away to wait for a ride. A particularly large number of people moved during the market, again an audience record in connection with the 1925 Kajaani agricultural exhibition, when 114 (according to some information 149) registered vessels brought 253 people to Kajaani. When they returned, the police let only 113 passengers on board, so the crowd was taken in two batches, first short-haul and then farther.

Like many other passenger ships, Vuokatti II was eventually destined for improved roads, car ownership and the development of rail traffic. At its Annual General Meeting in 1936, the cooperative authorized its board of directors to sell Vuokatti II if a suitable price was obtained. Vuokatti II was soon sold to the Oulujoki Swimming Association, which transferred the ship to Oulujärvi as a sparrow. According to Oulujärvi’s Koutaniemi, the vessel was named “Koudan”. However, turning a passenger ship into a sparrow required much more than a name change. The purchase price was FIM 225,000, but in the end the new sparrow came to pay the swimming association FIM 607,000. Modifications thus accounted for almost two-thirds. The ship’s engine and boiler were preserved, but a vortex was built at the stern at the cargo hold, which was fitted with a couple of kilometers of toe wire. Two large anchors came to the bow and a steam-powered anchor game to lift them to the deck. Thus the weight and draft of the ship increased, and its sides were increased by twenty cents. Naturally, the cabins were also built in the new faith.

The alterations were completed quite quickly, and Kouta started toasting as early as 1937. It was a barrel toaster, the operating principle of which is described in more detail at Kajaani I. Among Oulujärvi’s steam toasters, Kouta was the most efficient. It had a crew of ten. The toeing speed was about 2.3 miles per hour, so it wasn’t the job of a busy man. The open backs of Lake Oulujärvi also caused their own problems, in windy weather the ferries fell apart and it took time to chase the runaway trees. We started bundling in Oulujärvi in ​​the 1950s, but by then we are already talking about diesel tugs. The Uittoyhdistys bought its first diesel tug, Oulujärvi I, in 1959. Kouta persevered until 1966, after which it remained standing but was saved as a kind of spare vessel. In 1974, a retired private person became interested in it and bought it, who planned to move it to Päijänne as a pleasure boat. However, the size of the ship made the transport problematic, and he ended up selling the ship further.

The nine-year stand had, of course, left its mark on the ship, and the first task for the new owners was a major overhaul, which took a couple of busy years. The fuel was changed to light fuel oil. After this, work began on a change in appearance in the direction of the original passenger ship outfit. The step-by-step transformation took place in 10 years. In addition to private use, Kouta also makes commercial traffic. Oulujärvi Höyrylaivamatkat Ay (later Oy) was founded around it in 1985. Kouta has been inspected for commercial traffic and