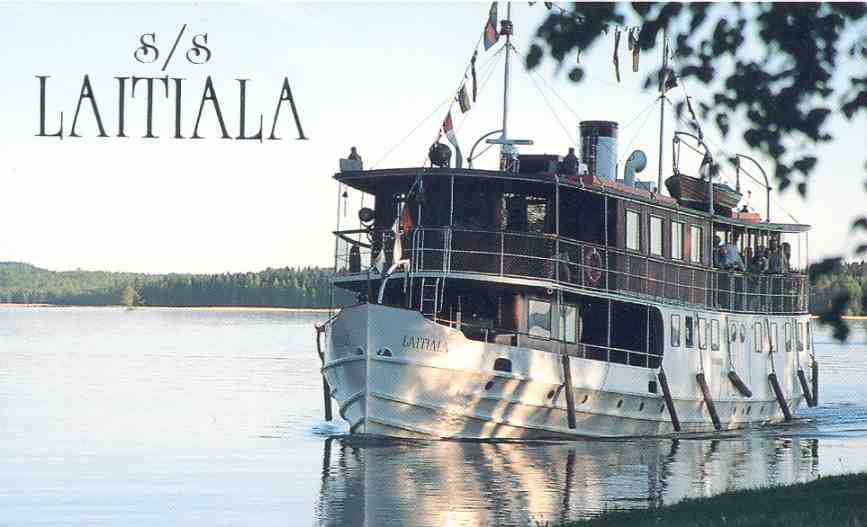 At the beginning of the 20th century, a new shipping company was established in Leppävirta. The inaugural meeting of Leppävirta Höyrylaiva Oy was held on 23 August. 1902, and a week later a ship was ordered from Varkaus, which became Leppävirta. The price of the ship was FIM 45,000 and the route was Kuopio – Savonlinna, on which it began operating in 1903. There was immediate talk among the company about ordering another ship. Leppävirta II, now Leppävirta, was completed as early as 1904, when the first ship was named after the serial number “I”. The company was successful, and already in 1905 Leppävirta III was completed, although it was sold to Merchant Westerholm in Mikkeli a couple of years later. In 1908, a fourth ship was purchased. Leppävirta I was sold on 30 July 1913 to Höyryvenhe Oy Kertu, which gave it the name “Mikkeli”.

Kerttu, founded in 1891, had become the largest shipowner in the Saimaa watershed. The company’s management wasn’t shy about buying ships if a bargain came to fruition. The purchase of Leppävirta I hit a good seam for the company, as the soon-to-start World War II greatly increased ship prices. The ship, named “Mikkeli,” was allowed to take 192 passengers. As its name implies, it became Savonlinna-Mikkeli, although in 1927 it switched to Savonlinna-Lappeenranta due to the fire of the “Savonlinna” ship, while the smaller company “Punkaharju” of the same company operated the Mikkeli route. On the Mikkeli-Savonlinna route, it was allowed to be surprisingly calm from the competition, although the “Tähti” ships and the “Turisti” between Mikkeli and Lappeenranta competed for upstream passengers to the southern end of Louhivesi. However, the “Mikkeli” as a comfortable ship was able to provide ample space for passengers and was successful on its route for quite some time.

As mentioned for other passenger ships, bus traffic began to compete with passenger ships to an increasing extent in the 1930s. After the wars, e.g. due to the regulation of gasoline, shipping companies did a little better, but in the late 1940s conditions began to become more difficult again. At the turn of the 1950s, Kerttu merged with Saimaa Steamship Company, but it did not stop the economic downturn when the highly anticipated Olympic summer was disappointing in terms of passenger numbers. It became one of the quietest tourist summers in history. Constantly rising operating and payroll costs, along with declining passenger numbers, eroded profitability, which was attempted to improve by the 1964 transition to oil heating on all of the company’s ships. With the new owner, the ship got a new name, “Mikkeli” became “Orivesi II” in 1956.

The conversion to oil did little to change the company’s course, and a couple of years later its ships were sold. Most of it was sold to the city of Savonlinna, or rather to the company “Saimaan Laivamatkat” founded by it together with Lappeenranta. Orivesi II was an exception, it was sold in 1966 to Mikkeli to Suur-Saimaan Laivat Oy, founded by the City of Mikkeli and Mikkeli Tourism in 1959. The company already had “Mikkeli” (now Paul Wahl), and Orivesi II now became “Mikkeli II”. However, this phase was short, when the people of Mikkeli joined the Saimaa Cruise Company, founded in 1967 and owned by the cities and municipalities of the watershed. In the new company, “Mikkeli” was renamed “Joensuu”, when the serial number was dropped from the name of Mikkeli II and it became “Mikkeli”.

The company had problems from the beginning: its partner cities demanded traffic to their own ports even if it was not profitable, old ships did not fully meet tourism requirements in terms of comfort, a long-term marketing strategy could not be created, an important restaurant operation was fragmented for various entrepreneurs, etc. according to the information, Mikkeli was already sold to a private owner before this, in 1980, and in 1982 the owner is reported to Restaurolalaiva Hopeasalmi Ky. The new purpose of the ship is evident from that name, it became a restaurant ship on the shore of Savonlinna Market Square.

The ship’s quiet life in the port of Savonlinna finally lasted for almost a couple of decades until it was bought by a private individual in 1997. The ship was moved with the top deck dismantled to the bay, where demolition work continued. In the autumn, new ones could be built, and the fire pipes were also replaced. In April 1998, the ship’s aircraft spun for the first time after a ten-year hiatus. According to press reports, after the renovation work, which cost FIM 6 million, the vessel was solemnly christened Laitiala. It started making charter and evening cruises from Lahti. The ship is still the decoration of the port of Lahti as a restaurant ship.