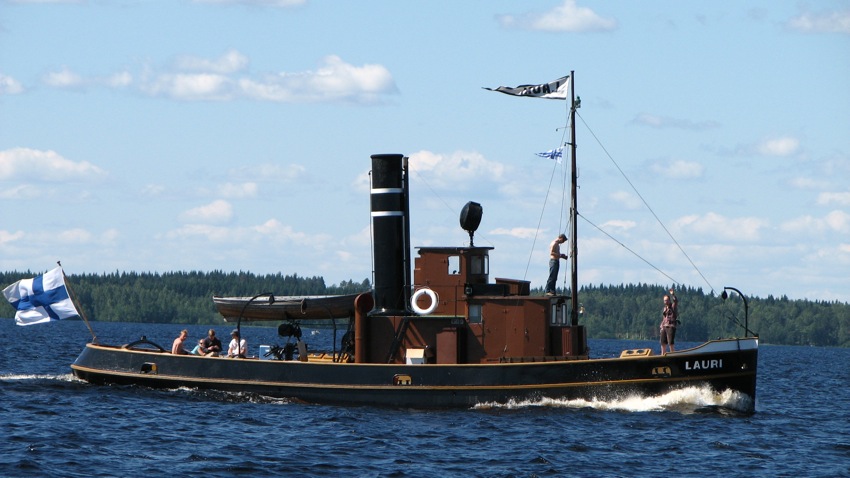 The tug steamer Lauri is the last steamer built at A. Ahlström’s workshop. The Finnish Rail Administration ordered the vessel at the request of VR’s timber office to improve VR’s Saimaa towing capacity. The need for VR / Vapo’s log shipments increased throughout the 1930s and peaked immediately after the wars, in 1946. Thereafter, shipments declined steadily, which was also reflected in the number of towed vehicles, ships remaining stationary or on the list from the 1950s.

Lauri was named after VR’s Lappeenranta district forester Lauri Vihinen and its price was FIM 750,000. Lauri was handed over to his client in October 1931, a little late on schedule. Laurin was designed according to the customer’s wishes by constructor Johan Valpas Pulliainen, who designed about 300 ships built by Ahlström. On October 8, 1931, the Karelian newspaper wrote on its news page: “It [the ship] is 65 feet long and 15 feet wide and a very strong act, an icebreaker type.” The ship was thus made sturdy, beautiful and efficient, but Lauri has a very small deck structure.

Laurissa has a so-called a Scottish marine boiler with a water volume of approx. 7.98 m³ and a steam volume of 1.56 m³, a firebox of 59m² and a current operating pressure of less than 10 bar. One of the specialties of the ship is the salon under the deck at the bow, which was not usually found in tugs. In this salon, VR employees had the right to travel and stay overnight. As late as the 1950s, Vapo’s shipmasters were issued headquarters orders requiring ships to reserve clean sheets and other supplies for potential overnight stays.

In 1931-1968, the ship operated as a VR / Vapo barge tug in Saimaa, towing mainly log carriers to Lappeenranta from the Orivesi route. The ship’s last working summer was 1968, after which it was lifted to Vapo’s Luukka shipyard. In the summer of 1971, Vapo decided to give up Lauri and sold it “unnecessarily”. The ship only stood for two years, so it was in great condition as promised. In the journey of the new owners, the ship has toured almost all corners of Lake Saimaa, visiting Vyborg twice. Compared to professional times, the new destinations have at least been the Iisalmi and Pielinen routes. Lauri last visited Pielinen in the summer of 2008, in connection with the Joensuu regatta. Lauri has participated in private use after joining all the regattas of the Finnish Steam Yacht Club.