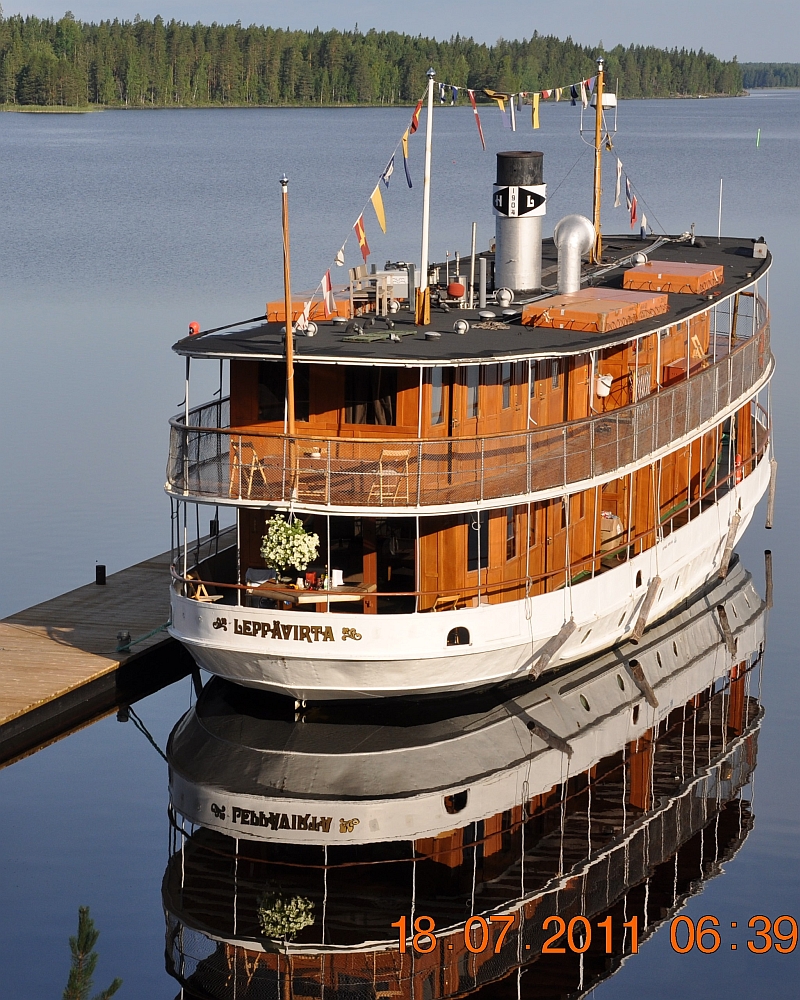 Founded in 1902, Leppävirta Steamboat Limited Liability Company ordered three passenger ships called “Leppävirta” at a rapid pace immediately after its establishment. The current Leppävirta was the middle of these, graduating from Paul Wahl’s workshop in 1904 and receiving the name Leppävirta II. “It was a graceful and fast-moving ship with several salons and cabins,” described AI Karttunen from the beginning in the steamship history of the Saimaa watershed in 1945. Leppävirta – ship II from Taipale at 3, from Rantasalmi at 5 and from Savonlinna at 14.15. III drove daily to the eastern and western shores of Kallavesi to Kuopio.

In 1908, the Leppävirta ships passing between Savonlinna and Kuopio were supplemented by the smaller ship “Kalla” on the line Horsmalahti – Konnus – Kuopio. Its purpose was to stop at those piers where the company’s larger vessels did not call. After the company sold its first ship to Kerttu in 1913 (see Laitiala), a new Leppävirta I was ordered in its place. However, it was also sold to Pohjolan Höyrylaiva Oy in 1943, when Leppävirta II remained the company’s only ship. As mentioned in the case of other passenger ships in the Saimaa watershed, Saimaan Laivamatkat Oy, jointly owned by the Saimaa municipalities, was established in 1967, acquiring the wholesale traditional “white ribs” of Saimaa. Leppävirran Höyrylaiva Oy later joined this group with its only ship. At the same time, the name of the ship changed, “II” fell out and the ship got its current name. However, according to the National Board of Antiquities’ merchant ship database, this accession and change of name did not take place until 1967, as mentioned in some sources, but only in the late 1970s.

As mentioned for other passenger ships, the story of Saimaa Cruises was not very successful. After the company went bankrupt in 1982, a few municipalities acquired their own ship. One of these was the municipality of Leppävirta, whose choice – naturally – was for the municipality’s title ship. Others were Savonlinna (s / s Savonlinna) and Varkaus (s / s Paul Wahl). Leppävirta began to operate mainly charter and cruise traffic, which was operated by the Kuopio-based Roll cruise company at least for part of the year. In 1997, Leppävirta wandered off the fairway and ran aground in the southern part of Varparanta’s back. There were 50 passengers involved, but no injuries. The investigation identified the cause of the accident as “the lack of a sufficiently detailed route plan, the inadequacy of the master’s instructions to the deckhand and the abandonment of the ship by an inexperienced deckhand after the master’s departure from the cockpit.

The bad luck of the Leppävirta ship continued after the incident. In the autumn of 2002, it ran aground in Haukivesi on its way from Laitaatsilta to be docked. It was detached, docked, its bottom rehabilitated and lowered into the water. During winter storage, however, it sank in Laitaatsilla, causing considerable damage. There was talk of dieselizing it, but in the end it was decided to keep it as a steamship. However, the adversity had reduced the municipality’s interest in the ship’s equipment, and it sold the ship to a new owner on the basis of a tender, which continued to rehabilitate the ship first at the Savonlinna Laitaatsilla and then at the Kanavansuu shipyard in Lappeenranta. The renovation was completed in 2009, suitably before the tour’s saimaa tour by opera singer Matti Salminen. At the same time, the tour served as a celebratory return to the Leppävirta ship for traffic on the waves of Lake Saimaa.