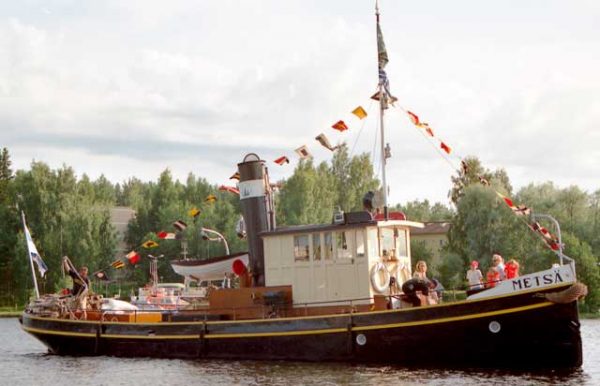 The early stages of S / s Metsä were quite obscure for a long time, and for example, the year of construction of the ship can be found in various sources. It has long been known that the ship was originally from the Netherlands, and the current owner was able to trace the ship’s origin from the archives of the Rotterdam Maritime Museum on the basis of a serial number stamped on the hull (D 724 N). The vessel was ordered from the Burgerhout & Kraak workshop in Rotterdam in 1877 by the dredging company Tijs Volker Sliedrecht. Designed for icing, the tug was named “Adriana Christina”. As a special curiosity, it can be mentioned that the ship’s boiler was changed as many as three times during its Dutch years, first in 1883, then in 1893 and still in 1908. The latter boiler, built in Dordrecht in 1891, was still there when he came to Finland.

From 1912 to 19, the ship operated in Germany and Denmark. The ship is still mentioned in the archives of the Rotterdam Museum at that time: in 1919 it was sold to W.J. Kalis Bagger Mij. Dredging company, which removed it from the boiler register. Little is known about the years 1919-25, the next information about the ship is its acquisition in Finland in 1925 as Ragnar for Iisveden Metsä Oy from Sweden. The ship was now named “Forest”, by which it is still known. Its machine was special, the so-called. “Bending machine” in which the cylinders of the compound machine are in a v-shaped position. At that time, no such machines were known in Finland. On the other hand, there were several Carlsund-type tipper machines, for example in the “Haapakoski” tug. According to the documents, when the ship was brought to Finland, it had a 44-square-meter boiler built in 1891 in Dortsecht, the Netherlands, but it was in poor condition. After the repairs, it was approved for two years at reduced steam pressure, and after 1927 a new boiler was purchased from Crichton & Vulcan in Turku.

Metsä began towing “Piimä”, as the owner company was often called, logs and, from time to time, log barges. The barges Panu and Kimmo were built for its use in 1939. At some point, it is known to have had a log barge called “Jehu” on its side. According to Eino Korhonen, who served as the ship’s engineer on the ship, the ship was “good to tow, but ate wildly”. According to the recollections of various sailors, Metsä was also fast and good at racing.

The last summer of the forest was 1956. After that, it remained standing. The village community of Iisvesi would have liked to keep the ship a museum ship, but this did not happen. All bronze parts were removed from its machine and fused to the bearing castings of the main machine of the Piima sawmill. Other movables were dismantled, including the ship’s horns, which were transferred to the same company’s “Tapio” tug, where they are still located. The ship collapsed until it was sold for private use in 1971. At this point, the lost machine parts were somewhat recycled. However, the renovation project faced adversity: the ship sank on the shore of the Kalliolahti sawmill, and in the port of Suolahti it was vandalized. Eventually, the ship stopped in Puuppola. Next, the vessel was wanted by various private owners in 1985-86 (transfer from Puuppola to Lahti) and 1986-89. Eventually, Metsä passed to the current owner, who put it in great working order for the summer of 1993. Since then, it has once again been in traffic in fine condition in Päijänne, with its home port of Soimasaari.