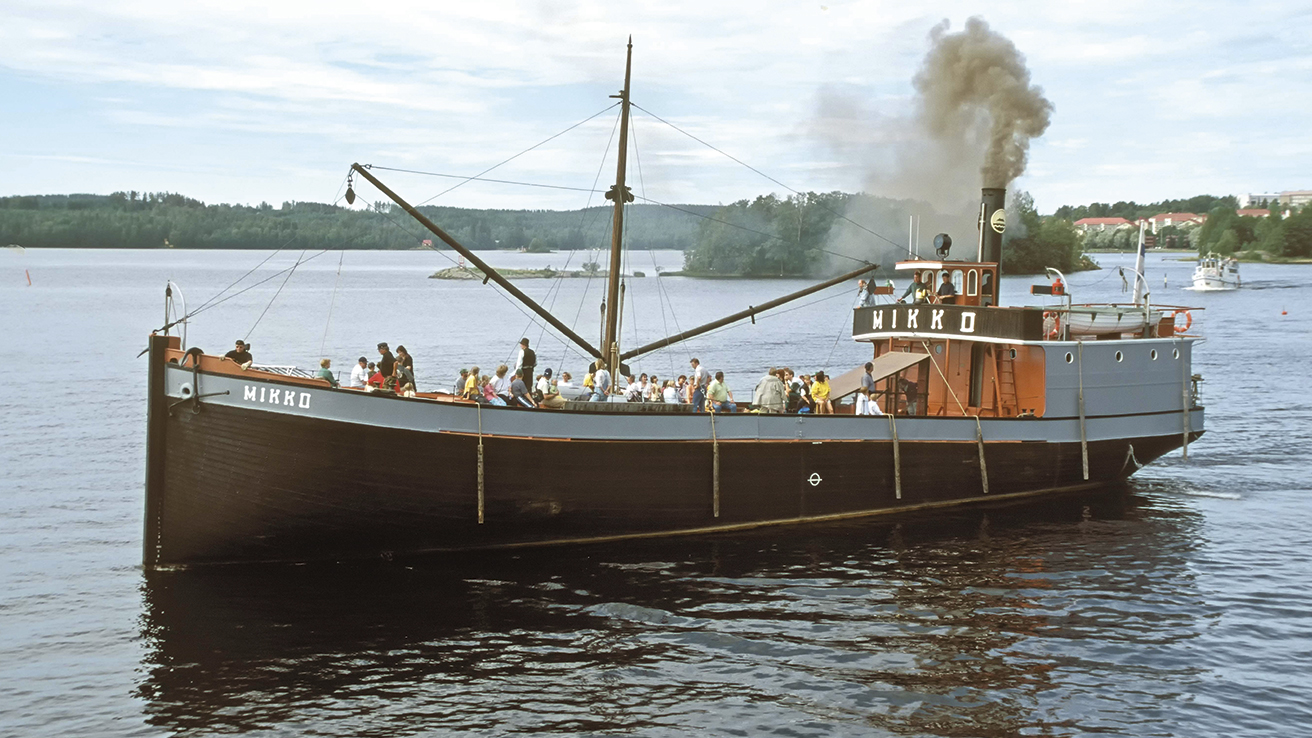 In 1914, the Savonlinna machine shop, under the direction of engineer Frans Vilenius, built a tar steam with a composite frame (wooden frame with iron arches) for August Soini from Koivisto and the heirs of Vilho Penttinen. However, in the same year, it ended up in the ownership of Topias Soini, the father of August Soin, and Adam Peusa, a merchant. “Canal-filled” or “full-bodied” tar vapor, such as vessels typical of the Saimaa watershed, sized according to the size of the Saimaa canal closures, with a length of just over 30 and a width of just under 8 meters. To maximize cargo space, they were generally quite plump and flat-bottomed. The cargo spaces were located at the bow, while the aircraft and cabin spaces were at the stern of the ship. At their best, these ships were sailed in huge numbers on Lake Saimaa.

As tar steam from Koivistol, Ensi sailed e.g. With Ladoga, Syvär and Ääninen. In 1920, it was bought by Helsinki-based Ab Faner Oy, whose shareholders were also representatives of the Estonian plywood industry, most notably A. Luther. First, a lot of cargo was transported between Tallinn and other Baltic ports, until it was sold to Estonia in 1923 and entered in the Tallinn register, with A. M. Luther AS as the new owner. In 1925, the ship was bought back to Finland by Andreas Wager & Söner Ab from Vyborg, who operated it on Lake Saimaa, Lake Ladoga and the Gulf of Finland. However, according to Väinö Buuri, who worked in the first engine room of the coal-fired company in 1930, at least at that time the main activities were at sea: “There was a lot in Pohjanlahti, Lohjayhtiö’s cargo and stone cargo. Next, the ship was bought in 1931 by August Soini from Humaljoki and Toivo Kari from Säkkijärvi, while the ship remained on the Vyborg register. In 1935, together with Maiju Wager, they founded Laivaosakeyhtiö Ensin, to which the ship was also transferred.

Two years later, the company first sold to Enso Gutzeit Oy for a purchase price of FIM 130,000. The transaction was made on 9 November. 1937, and on the second day of December the ship was entered in the Savonlinna ship register. 14. 2. the ship was named Mikko in accordance with Enso Gutzeit’s naming conventions. The company used to name its tar vapors and “kuram mills” (otherwise a similar ship but with an iron hull) five-letter crew names that ended in the letter o. The company had previously had a tar steam called Mikko, but it had been sold in 1927, when the name had remained vacant. In Gutzeit’s fleet, Mikko mainly transported logs and props from all over Saimaa to Enso’s Vuoksenniska and Tainionkoski mills.

The tar steam was left to stand in 1962, and later donated in 1970 to the Savola branch of the University of Helsinki. However, this did not take very good care of his gift, and Mikko sank in the port of Haislahti. In the words of Tero Lehto, who was involved in Mikko’s later refurbishment: “The plane was almost completely covered in water, and otherwise the ship was in poor condition. It was without it whether it would be scrapped or lifted ”. In the end, it was decided to raise it, thanks to Lehto’s efforts and Enso’s money, and it was renovated at Laitaatsilla shipyard and this time donated to the city of Savonlinna as a serviceable museum ship. Mikko is still in working order, its home port is the museum ship pier of the Savonlinna Provincial Museum in Riihisaari. Its hold has a spacious salon where various events and celebrations can be organized. The ship is also used on various city cruises. It is also often seen as a guest in the regattas of the Steam Yacht Club, even if it visited the sea a few times in the 90’s. Of Saimaa’s large tar steam fleet at the time, Mikko is the last surviving individual with a wooden frame.