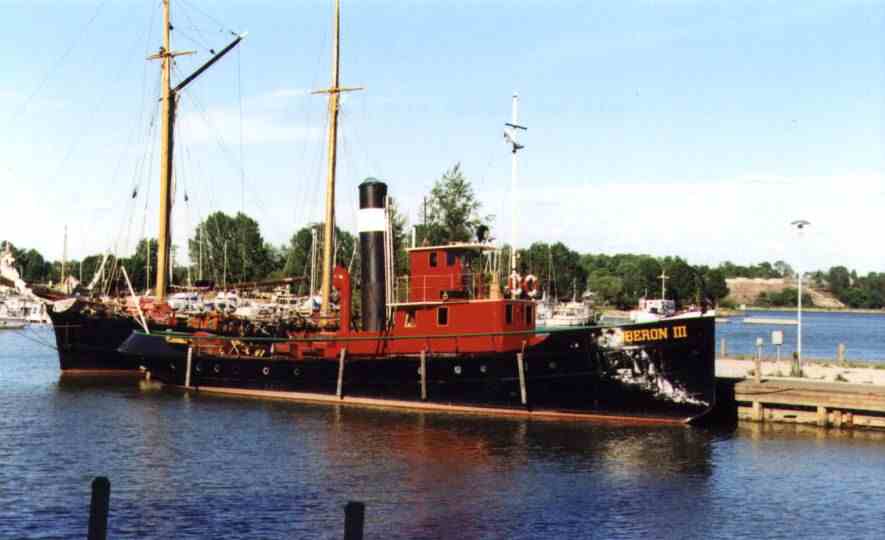 Ahlström’s varied designation criteria have also been mentioned for the Parsifal ship. The same series included, for its name, three tugs named Oberon, the king of fairies in the play Shakespeare. The first Oberon was later named “Ursula”, under which name it served the company’s Karhula plants in the Gulf of Finland, later the Varkaus plants in Saimaa. The Oberon II was built not only as a tug but also as a representation and pleasure ship, getting the name “Million-Oberon” in the mouth of the people. It was later sold to the Defense Forces under the name “Taipale”. Oberon III was completed from the company’s workshop in 1919. Like its predecessors, it was the high-quality handwriting of Johan Valpas Pulliainen, the renowned general designer of the workshop.

The Oberon III was particularly long as an inland tug, and thanks to its advantageous hull shape and relatively efficient machine, it is also fast. In the words of Veikko Kasanen, who worked as a deckhand on the ship in 1961-64: “It pops up, but the fire hugs it. … In recent years, loaded containers have been completed, as in Kutset. That one cargo was always on fire when we visited Joensuu, a couple of moths an hour – – Even though it had that tunnel, it still had passenger ships left when the kilipoo was driven a few times. Yes, it ‘s almost overdrive, not the Far Peace and the rest of it can do it in idle. It’s a bit flashy when it has a semmon carp base. ” The work was not as strict as it used to be, and there are stories from Oberon’s everyday life of how it could interrupt its towing tree after a passenger ship passed it, unload its cargo and container, circumnavigate the passenger ship’s arc, and thus show its power to return to work.

Oberon was the second strongest of its company’s tugs after Jorma II, and it was mainly used for line towing of cable cars on the Joensuu-Varkaus route. Sometimes, however, barges were seen. At least in the early 1960s, according to Kasanen, it also towed from Varkaus to the south, Kaukopää, Pulpi and Kauka. Plywood was brought back from Ristiina and Sulkava to Varkaus. The crew on the ship in the 60s consisted of a master, a mate, three deckhands, a foreman and an assistant, two heaters and a hostess. Food resources were replenished in Varkaus and Joensuu, in addition to which fishing was carried out. Milk and fish were also bought along the way. The sailing season was long, and often drove on ice. In Kasanen’s words, “Lunta also tried to tell a lot of ice and ice a few times, that carts were placed in front of the bow in the barge so that the ice would not break. Obero was good on ice when the bow is like that ”. The Oberon has an icebreaker that rises above the water surface, making it easier for the ship to rise on the ice.

The last summer of operation of Oberon III was in Ahlström’s service in 1967, although the following year it was still towing in Kuopio waters, leased to the Savo Swimming Association. The official owner of the vessel at that time was Tehdaspuu Oy, to which Ahlström’s wood procurement had been transferred the previous summer. For private use, it was sold in 1970 to a group of four steamship enthusiasts. Equipped with these, the vessel sailed the waters of Lake Saimaa for 25 years, until it was sold to a limited company established for this purpose in 1995. The handsome tugboat continues to sail in its home port of Savonlinna.