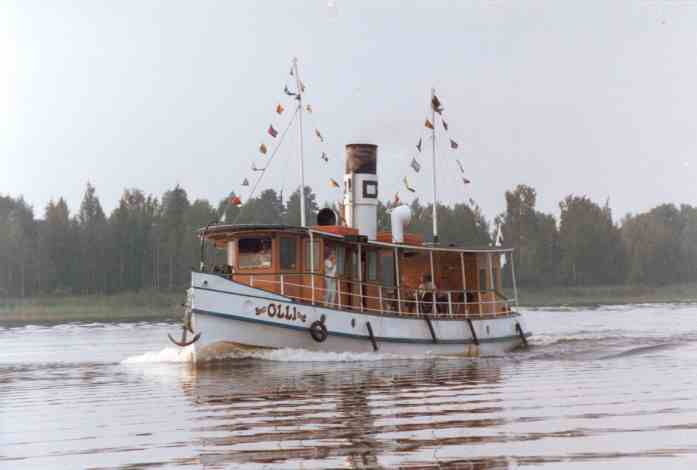 To the north of Ladoga, southeast of Värtsilä is Lake Jänisjärvi, which before the war belonged to Finland. The sawmill industry was practiced there as early as the 18th century, and with the iron factory founded by Nils Ludvig Arppen in Värtsilä in the early 1850s, steamship traffic also began on the lake. The growth of the forest industry – especially the paper industry – also increased this water transport. In addition to passenger ships, there were plenty of tugs on the lake, with each company taking care of its own floats. In 1913, the paper mills in the area founded the Ferrying Association, which also included sawmills. Later, wood was also procured for Ladoga. Initially, the swim was done with horse pennants, but later the association acquired tugs. However, not a single ship (“Irma” and “Silva”) had time to handle all the towing on the lake, and so in 1919 the association decided to acquire a new, more powerful tug. The tug named “Otso” ordered from the Lehtoniemi workshop was completed in 1920. It cost FIM 380,000.

Otso fulfilled its purpose, and the association no longer had to rent tugs or resort to horse-drawn carriages. Usually little Silva toed the ferries over Pienen Jänisjärvi and the bigger Irma and Otso took care of the towing of the ferries in Suur Jänisjärvi. The diving was carried out as a backdrop, which caused problems on the big back. In the words of Arvi Lonkainen, who worked on the association’s ships in the 1930s: “If there was a headwind, ”.

The war years naturally affected the area. After the Winter War, a considerable portion of the Ferry Association’s fairways remained on the Soviet side, as did industrial facilities that needed to float. During the Continuation War, the areas were recaptured and some factories were again taken into partial use. However, the end of the war again stopped traffic in Lake Jänisjärvi. At that time, the ships of the Swimming Association were in Värtsilä and stayed on the Finnish side. Kymi Osakeyhtiö bought the two largest of them, Otso and “Vedon”, which were transferred to Saimaa by rail. The latter became Hall XIV, while Otso became Hall XV.

The new owner commissioned extensive repairs and alterations to the ship, adding a Kort tunnel – the only one of the company’s ships – to improve towing capacity. From time to time, like the company’s stronger line tugs, it towed to Orraintaipale, where the company had an over-export facility. In Orraintaipale, sulphate and paper trees were separated from the ferries brought by the line tugs (see Halla XVII). They were arranged as new ferries, and one of Halla XV’s tasks was to tow these ferries from Orraintaipale to Mikkeli, from where they were transported by rail to the company’s factories. At some point, it also operated in the northern part of the water body, railing e.g. Timber from Muuruvesi and Maaninga to the northern end of the Heinävesi and Varkaus canals.

Kymi Limited Liability Company gave up the use of steam tugs around the mid-1960s. Of its large tug fleet, three have remained steam-powered. Halla IX and XVII have retained their original names and almost former residence. Halla XV, on the other hand, was sold in 1969 to Olavi Räsänen Oy from Mikkeli, which underwent a thorough transformation. The appearance and interior of the ship changed from a tug to a passenger ship. A summer shelter was built on top of the waiting cabins from the driving cabin to the rear, where an additional cabin and a sauna were built. The ship was painted white on the passenger ship in the traditional way and was named “Olli”. Olli is still owned by the same shipowner, sailing the waters of Lake Saimaa from Mikkeli.