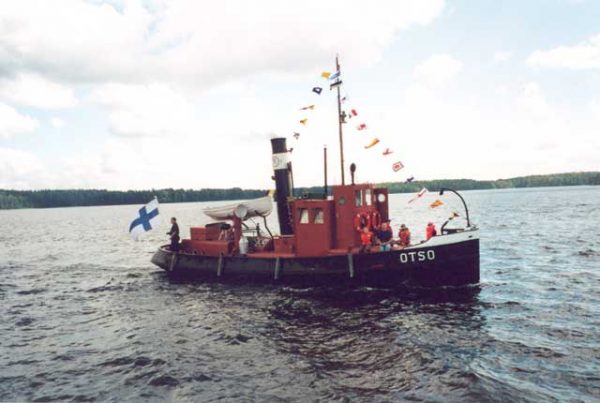 Ahlström began purchasing timber from Kainuu’s forests in the mid-1910s. At the same time, it naturally needed floating equipment for the area. For this purpose, in 1918 the company bought the steamer Elias and six lots from Friis & Hellsten in Oulujärvi, which were given the names A-Ahlström O / Y I-VI. The barges were necessary for Ahlström, the trees it carried were almost exclusively stacked. However, the old and dilapidated Elias was sold the following year, and the company built a new tug at its own workshop in Varkaus, which was brought to Kajaani by rail in the spring of 1920.

The new vessel was given the name “Warkaus”, which is a bit special because the company already had a larger tug named after it (see “Warkaus”). Apparently the company thought it didn’t matter because the ships were in different waters. The beginning of the 1921 sailing season did not go quite routinely from the ship. On May 19, one of the wings of the Warkauden propeller broke aground, and the next day the crew found the body in the lake. The deceased, who was revealed to be a merchant from Kajaani, Alfred Hilden, was transported to Kajaani, in addition to which the crew waited for police interrogations and testified in court. A. Ahlström Oy was not pleased with the delay, but demanded compensation for lost towing time.

Ahlström had a warehouse in Metelinniemi, at the mouth of the Kiehimänjoki River. A lot of wood was floated there, and from there it was Warkause’s part to tow the trees in barges to Kajaani in the port of Lammi, from where they were transported by rail to the company’s factories in Varkaus. When the railway from Kontiomäki to Kiehimaa was completed in 1926, Ahlström’s trees began to be loaded onto wagons in Metel. Warkaus thus became unnecessary in the area where it had sailed for seven sailing seasons. After the summer of 1926, it was transferred to Lake Saimaa.

As the company already had a tug called “Warkaus” in Saimaa, the newcomer had to be renamed. It was now made “Otso”. Otso’s area of ​​operation in Saimaa was the waters of Varkaus, where it towed barges and acted as an arrangement tug in the vicinity of the Ahlström mills. From time to time, however, it towed barges further afield, from the direction of Kuopio-Iisalmi, from Joensuu and the Heinävesi route all the way to Juojärvi. In the south of Savonlinna, on the other hand, it was less frequently seen. Otso had at least six men and a hostess in Saimaa.

After the wars, Otso towed semi-finished war reparations from Varkaus to Lappeenranta from its owner’s workshop, from where they were transported by land to the sea for finishing work before being handed over to the customer. This work continued until the early 1950s. In 1947, renovation work was carried out in Otso. In addition to the deck structures, the bow cabins were renewed. For the last years of his professional career, the ship operated at Ahlström’s Varkaus mills in timber transfer and arrangement tasks. This work was completed in 1961.

In 1964, Ahlström sold it to Otso, which had become redundant, for recreational use, when it sailed the waters of Varkaus for a decade until the ship remained ashore. In 1995, the ship got a new shipowner who has carefully refurbished Otso.