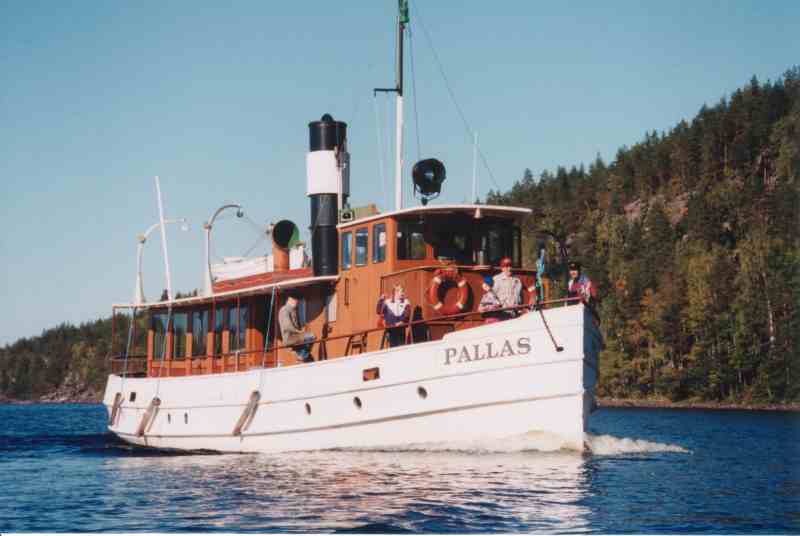 Pallas was built in 1923 in Varkaus at A. Ahlström’s machine shop for Lojo Kalkverk Ab, the Lohja Lime Factory, which owned it as a tugboat in Lohjanjärvi. However, three years later, in 1926, it was sold for FIM 350,000 to the North Saimaa shipowner company (Nord-Saimen Rederieaktiebolag, or NSR). This was founded in 1913 by A. B. W. Gutzeit & Co, Hackman & Co, Enso Träsliperi, Ab. T. & J. Salvesen, Halla Ab and Ab Tornator to handle the rafting and floating of the partner companies in Northern Saimaa. In the south, the companies that housed their huts when it was easiest to centralize the floodplains of the far northern part of the water body to a single operator than to take care of them separately. The largest shareholder was Gutzeit with a share of about 30%, with the others owning 10-18% each. Initially, three tugs were acquired for the company: Pilppa, Karvio and Poku. However, there was too much work for the three tugs, so 1922 Voima was bought from Salvesen and 1927 Aino from Gutzeit, ie Pallas between them. The strength of the fleet also sometimes included Syväri, Wuotjärvi and Risto, which were later sold to the Savo Floating Association, to which other vessels of the company had also been leased, if the floats allowed.

NSR commissioned some modifications to the vessel, such as raising the deck 40cm above the waterline and renewing its deck structures before it began its towing mission in Saimaa. According to the company’s accounts, Pallas was the most mobile of the company’s ships in 1936 and -37 in terms of sailing days: 194 204 and 2651 man-hours, compared with 211 and 3526 the following year. however, the accounts showed some kind of surplus. The company’s finances consisted of “mileage allowances” paid by the member companies per floated unit. Palla was mostly used by NSR for towing the Heinävesi route. In 1942, however, the NSR was dismantled and its ships divided among the member companies. Pallas became jointly owned by Hackman and Kaukas, but remained leased from Hackman to Kaukas. It was not until 1949 that a final division was made between the companies, as a result of which Pallas was sold in 1949 to the Savo Swimming Association.

Swimming associations had a long tradition in Northern Savonia. At the beginning of the 20th century, there were several small rafting associations operating in the area, which were merged into the Saimaa Ferrying Association in 1918 to organize co-operation under a common management. However, the association, which covered the entire Vuoksi watershed north of Savonlinna, swelled, and in 1930 it was decided to divide it into two parts, the North Karelia and Savo Swimming Associations. When it started operating in 1931, the Savo Swimming Association had three motor tugs and no steamers at all, so it had to rent equipment. The situation improved in the late 1940s: by 1950, the company already had 16 ships of its own, the newly acquired Pallas being one of them. In the same year, new, steel deck structures were made for Pallas, which are still there.

The largest swimmers in the association were Enso-Gutzeit Oy and A. Ahlström Oy. Pallas mainly operated as a tugboat tug on the 60 km long Heinävesi route Leppävirta – Vaaluniemi. There were no radios on the Floating Association’s ships, but messages to the skipper came from the channel men. It also did not have a container next to it, but firewood was piled on the deck in addition to the logs. It was necessary to halo often. The Swimming Association had started with motor tugs and began giving up steamships as early as the 1950s. In 1956 it acquired 2 Diesel tugs, in 1959 two more. In 1961-63, almost all the equipment was renewed, in three years as many as 13 motor tugs were acquired. In the case of Pallas, the towing duties finally ended in 1967, after which the vessel was sold to private ownership in 1970.
In 1971, an oil burner was installed in Pallas to replace the log heater. A stern cabin and summer shelter were also built there, aiming for the appearance of single-deck passenger ships of the 1930s. Oil tanks were later built in the log boxes. After 1976, however, the vessel remained in little use and stood first on the shores of Leppävirta, then on Suvasvesi, until it was rehabilitated back into operation in 1989-1990. Since then, Pallas has moved around Saimaa, with Jänissalo as its home port.