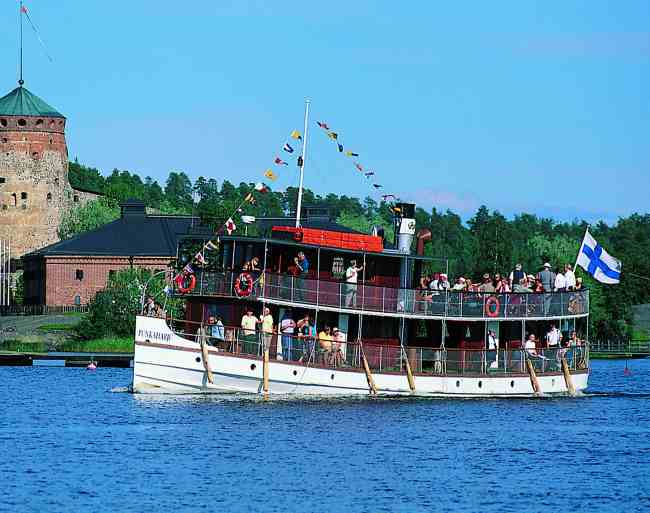 The ship was ordered from the Savonlinna workshop in 1905 by “Höyryvenhe Osuuskunta” which gave it the name “Osuuskunta”. The founders of the cooperative were Punkaharju farm owners. The ship was designed by Eemil Kiiveri, who studied at the Lehtoniemi shipyard in Varkaus, known as a builder of passenger ships, and was specially designed to run smoothly with low engine power. It had “only” an 80 hp machine. In 1913, the ship was damaged in a fire, after which it was replaced with its current, slightly larger machine than the original. The ship, which was allowed to take 98 passengers, was placed on the route Savonlinna – Vuoriniemi. The cooperative, as the name implies, was “a typical country ship, a cozy and pretty yacht that was viewed with local pride. It managed to compete for its time and also wanted to end on time. ” This is how A. I. Karttunen described the early stages of the ship in the history of Saimaa steamship traffic. It took quite a long time to try, but in the end, the apparently reasonably well-successful cooperative ceased operations and the ship was sold to Saimaa’s largest passenger shipping company, Höyrylaiva Osakeyhtiö Kertu, in 1934.

The steamship company Kerttu had once started operations with one small steamship named Kerttu. Since then, it had been steadily expanding, as its board was not at all reluctant to buy more ships if they got them cheaply. However, the original Kerttu was no longer in the shipping company’s fleet, and so the Cooperative was allowed to “inherit” this name, it became “Kerttu”. It then bore this name until Kerttu ceased its operations under the pressure of car and train traffic in 1967. Like most other Saimaa passenger ships, Kerttuk was transferred to the fleet of Saimaan Laivamatkat Oy, which was founded at that time. In accordance with the company’s naming policy, it was given a new name, “Punkaharju”. However, Saimaa Laivamatkat’s operations ended in bankruptcy in 1982, and all its ships were auctioned. Punkaharju was shouted at by Martti Sieranta, who subleased it to Punkaharjun Laivat Oy.

In the mid-1980s, Punkaharju became the owner of Reijo Ikonen, who moved it to Joensuu, where it began cruising on the Pielisjoki River under the name Taimi III. In 1993 it moved to similar traffic in Lappeenranta, still called Taimi III. In 1999, it became the property of Savonlinna-based Vip Cruise ltd, underwent an extensive renovation and returned to its familiar Savonlinna waters under the name Punkaharju. Today, the ship, registered for 75 people, makes about one and a half hour landscape cruises from Savonlinna to the nearby archipelago every day during the summer.