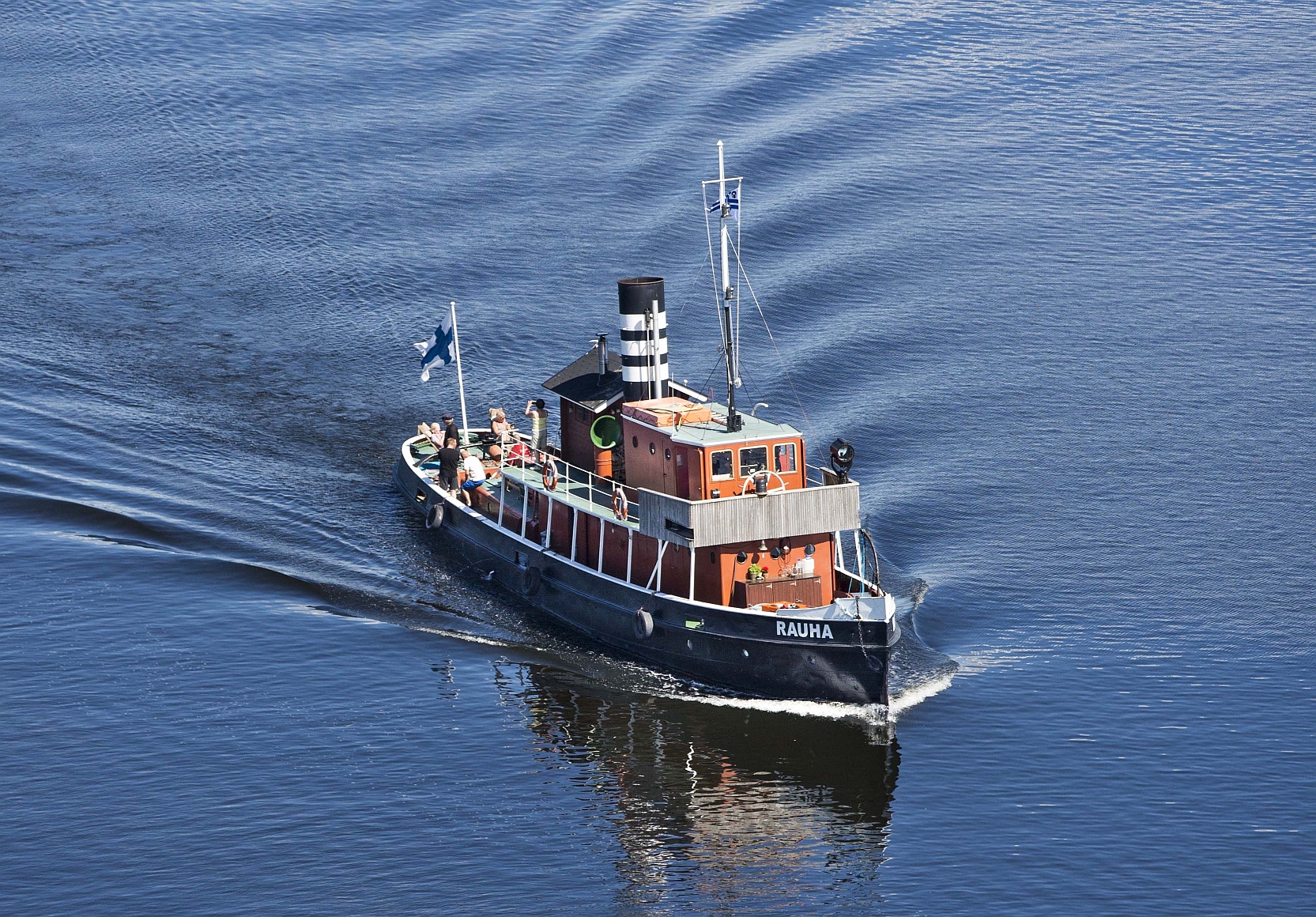 One of the notable early tugboats was Gustaf Cederberg from Joensuu, whose first tug, Ilma was completed in 1872. It was followed by Rauha, built by the Vyborg machine shop in 1878, which was probably Saimaa’s most powerful ship The arrival in Joensuu was acknowledged as follows: “A new steamship called Peace, made by the Wiipur machine shop for the gentlemen’s Cederbergs’ trading room and mentioned before in Karjalattare, arrived here on Sunday.

Peace can be found in brief newspaper information from the early days anyway, as a powerful and sturdy tug, it was usually the first ship in the area in the spring and the last in the fall. The beginning and end of the sailing season was information that was usually mentioned in the newspapers. On July 8, 1909, there was a different story in “Karelia”: “Business name Gustaf Cederberg & partner-owned tug“ Rauha ”, which w.k. 15p. in the evening drowned in Tappuwirra in the Veden reef, has now been raised. The tug is one of the strongest tugboats in the Saimaa weset, running 9 feet deep. ” Other Cederberg tugs were Rapid, Reipas, Roteva, Voima and Tarmo. In 1920, Cederberg & Co and its ships became the property of the Kaukas Company.

Like ships of several peers, Rauhak has experienced changes along the way. Originally, its crew quarters were the driver’s cabin, the master’s cabin and the crew cabin, in addition to which the ship had a kitchen, toilet, food storage and a “cable canopy” where ropes, for example, were stored. Since then, a new boiler was made in 1909 and a new machine was installed in 1912, although the year of manufacture of the machine is 1903. At the same time, the crew’s premises were also renovated. In 1919, during the renovation work carried out at the Varkaus workshop, the berths were added, which accommodated 16 people on board. The single-deck ship was built in Lauritsala surprisingly late, only in 1955. The ship was converted for oil heating a dozen years later.

Rauha was, at least initially, mainly a lottery tug, which usually towed batches stuffed with sawn timber from Joensuu to Ryövälinniemi, the outer port of Vyborg to Uura. With its original machine, it usually pulled 4-6 lots, with the new machine 10-12. (ER77) At its best, it is known to have been followed by 17 loaded lots. More empty could be transported. Even in its pulp mills, the distant company used lottery transport for much longer than other companies. The closure of the Saimaa canal -44 reduced the use of lots in Saimaa (in general, not only in the Kaukas).
Peace was one of the 35 inland waterway tugs that were taken from Saimaa to the Clearing Fleet, founded in 1945, to clear mines from the Gulf of Finland. Peace was the oldest, strongest and heaviest ship in that group brought from Saimaa.

In terms of peace, too, professional traffic ceased in the 1960s, as did other large steam tugs. The ship was rescued and bought in 1970 by a group of steam yacht club activists. However, these “united shipping companies” had their fingers at play on several ships, so a new home was sought for Rauha in 1977. The new owner gave the ship the name “Humppa” the following year. Ten years later, in 1987, the ship was traded again, and the new owner returned the 10-year-old Humppana to Peace in 1988 in honor of the ship’s 110th anniversary. It still sails under the same name in Saimaa, domiciled in Savonlinna.