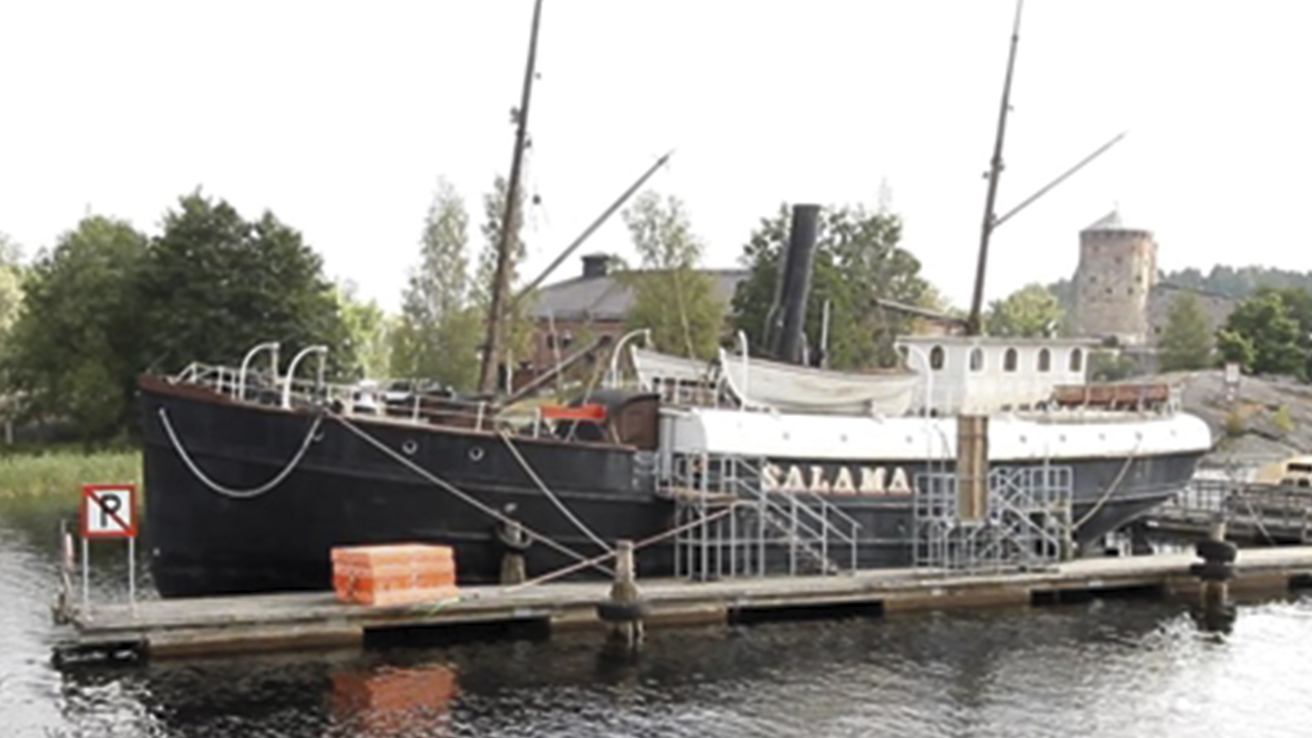 Although many tugboats and a few passenger ships to Kuopio and Joensuu passed by Savonlinna in the 1860s, there were no steamers in the smaller Savonlinna. Savonlinna, which received trade rights in 1866, needed the long lines of its own ship to meet the needs of its increased freight and passenger traffic. In 1874, Savonlinna Höyrylaiva Osakeyhtiö was born, whose exceptionally large number of shareholders included investors not only from Savonlinna, especially from Joensuu, but also e.g. From Vyborg, Sortavala, Puhos, Ilomantsi, Enso, Kuopio and Leppävirta. The company ordered an auxiliary sailboat propeller steamer / “steam schooner” Salama in 1873 from the Vyborg workshop, where it was completed in 1874.

In the early years, the ship made voyages on the Lübeck “butter line”, but its long-term route eventually became Joensuu – Savonlinna – Vyborg – St. Petersburg. Along the way, Salama also visited Lauritsala, Puumala, Oravi, Enonkoski and Vuokala. The ship had a good restaurant, but only 12 berths for passengers despite the spacious stern cabin. The lightning traveled 7.5 knots, and at this rate consumed “a barrel of coal per hour”. The company did quite well, being able to distribute some dividends to its shareholders each year. In the summer, it usually made 13-16 trips, depending on the length of the sailing season. In the best year, as many as 20 trips were made, due to the mild early winter. As can be deduced from the rather limited passenger capacity, Salama in its early years focused especially on cargo transportation. For example, the products of the Kangassaari glass factory were usually exported to the markets of Vyborg and St. Petersburg.

In 1883, the vessel was rebuilt at the Puhos workshop. In addition to the staff cabins, three salons and four new cabins were built. Sleeping accommodation could now be reserved for 60 passengers. The company thus clearly directed its strategy towards passenger traffic. Apparently, this proved to be a wise choice, as the financial results of the ship and the company improved after the changes, even though the roughly similar seagoing ships Sampo and Kaleva in Joensuu competed on the same route. Passengers were happy with the ship and its restaurant was praised. The ship did quite well until the fateful day of September 13, 1898. At that time, the passenger ship Ilmari from Kuopio collided with Salama from St. Petersburg in Puumala near Ruins in a piece of rye cargo, as a result of which Salama sank.

The case began a long lawsuit in which the court found Ilmar guilty of a crash. Ilmari was ordered to be auctioned off and at its own value to compensate for the loss of Savonlinna Steamship Company. The Lightning at the bottom of Lake Saimaa was also sold at the auction. It was bought by a “sir.” Soininen from Tyrvää for 2000 marks. However, his attempts to lift the ship failed, the ship lying too deep to be lifted with the technology of the time. Yes, the most valuable part of the cargo was saved.

The ship was forgotten over time until it was found by chance and lifted with Enso Gutzeit Oy’s modern lifting equipment in 1971. The following year it was handed over to the Maritime Museum Association. The moderately well-preserved Lightning was restored as a museum ship and opened to the public in Savonlinna in 1978. Today it is on the museum dock of the Savonlinna Provincial Museum in Riihisaari. The ship has been restored to be as original as possible, and, for example, the traces of the collision on the starboard side of the ship with its bent plates are still visible inside the ship.