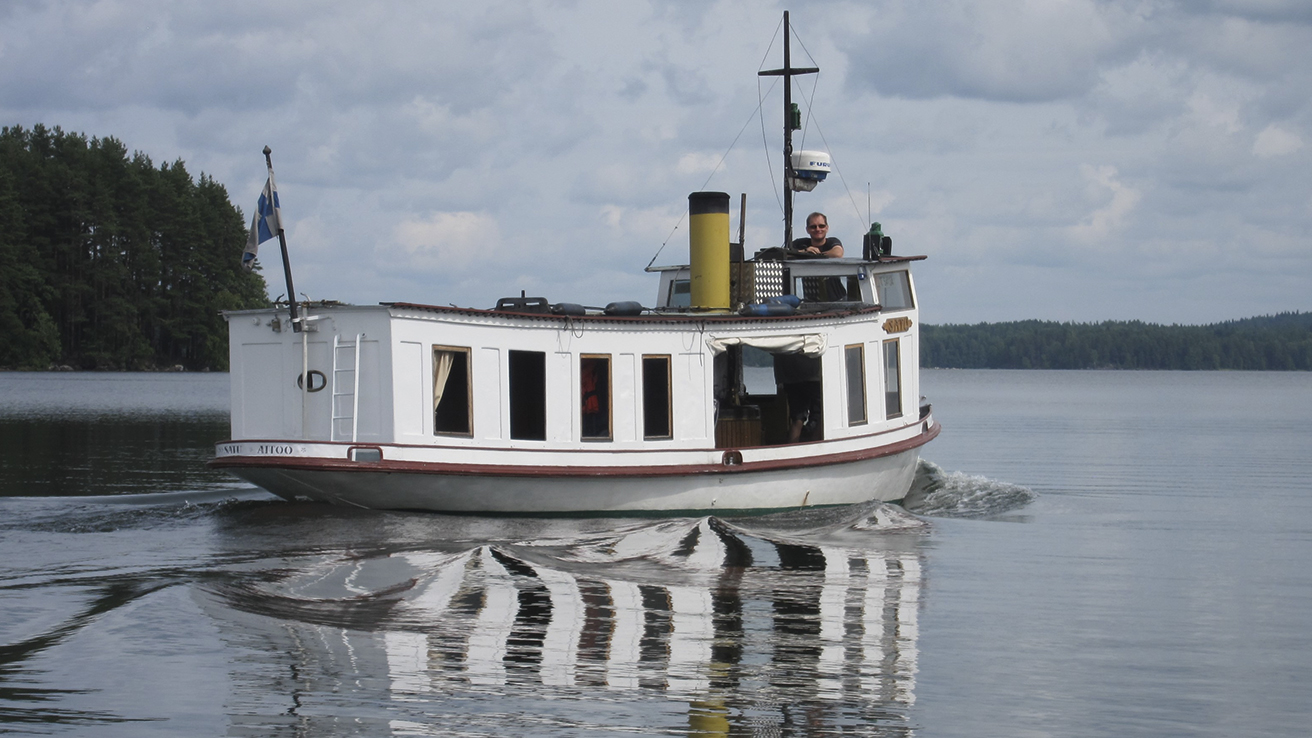 At the beginning of the 20th century, the English textile engineer Percy Albert Sharples, who first worked at Finlayson but after a dispute began to build his own Lapinniemi cotton factory, decided to build a steamboat based on his own sketch drawings. A few other wealthy burghers had one, and in addition, Sharples apparently had a farm in Teisko’s Ripolahti, which was facilitated by his own ship. A few of the ship’s structural solutions show English influence. These include, for example, the ship’s side keel and open-lid water pipe boiler, such as those used in Finland mainly in the fire brigade’s steam sprinklers.

The ship was built to build the Tampere machine factory Sommers, Hällström & Waldens, and was completed in 1901. It was turned into a fairly typical sloop of the time, followed by a salon and a small kitchen and toilet on either side of the corridor in the nave. There was only a canopy at the bow of the ship, though there were curtains on the front and sides if necessary. As such, the ship was pretty bad in headwinds. The water easily got in and against the boiler, whose water glass was easily broken. Otherwise, the ship was stable. Once upon a time, Sharples was in a sea distress on a ship named “Mary” when more water came in from the bow than the pumps had time to pump it. However, the ship was brought around and back to the home port. After this, Sharples still replaced the ship’s original tandem steam engine with a compound machine, but for one reason or another decided to sell the ship to Hieda Sahalle Orivesi.

Even in Orivesi, the ship continued as Mary. It was used, for example, by the sawmill gentlemen on their logging trips. Otherwise, not much information has survived about the times of Orivesi. In 1908 the ship was sold again, this time to Alarik Gummerus, who needed the ship for the yarn spool mill he founded in Pihtiputua. A supportive sleigh was made of logs for the ship, which was pulled by six horses. The voyage was long and by no means easy, but the ship was eventually reached. Gummerus immediately decided to improve the ship’s seaworthiness by building solid walls at the front and partially to the sides. The name of the ship became “Puritan” in memory of the owners of the American years.
Puritan now became a roller mill tug. Two barges were built for it, which it towed in props to the factory from the shores of Kolima. Occasionally passengers were also transported, Puritan was inspected for 30 people. However, the roller mill was put on hold as early as 1909. A lengthy legal process began between Gummerus and Tornator over the ownership of the mill and its assets. Puritan, who Tornator planned to take to his Lahti factories, also got a game piece. The ship was taken as far as Taimolahti to Viitasaari, but due to the twists and turns of the legal process, it remained there. Gummerus did not dare to touch it either, while the process was in progress. When the ship was standing unattended, almost all of its movable property was removed from it. The legal process finally ended in 1919, when Puritan remained with Gummerus. Gummerus then worked as a property manager at the Näsijärvi Paper Mill, and Purita was transferred to Tampere.

Renovation work on the ship began in Tampere. All wooden parts were replaced and the machine and boiler were refurbished. It was also decided to change the name. It was thoroughly considered and eventually came up with the name “Fairy Tale”. After this, the vessel operated mainly for recreational use. At its longest it was visited until Stockholm, in fact as many as twice. It has spent its years on different lakes: before the wars it plowed the waves of a Swede in Heinola for five years, from there during the armistice they drove along the Päijänne to Jyväskylä, from where the ship was transferred back to Kolima. The ship enjoyed itself here until 1972, when the voyage took me back to the waters of Lake Näsijärvi. At the beginning of June 1990, Satu was moved south to the city to Pyhäjärvi, from where it sailed to Pälkänevesi. Today, the ship’s home port is Aitoo, from where it makes its voyages to Hämeenlinna, Orivesi, Tampere and elsewhere within this vast body of water. The ship is still owned by the same Gummerus family as it has been since 1908, which is quite unique.