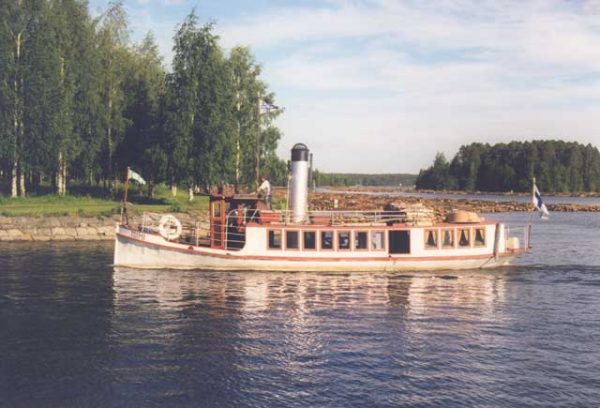 S / S Toimi was built in 1898 in Helsinki at the Stenberg workshop on behalf of Julius Johnsson, a commercial counselor from Jyväskylä. This owned the Kuokkala sawmill and missed a ship that could pass between the sawmill and his home in the city. However, he did not want a private sail, but ordered a small passenger ship whose route was Jyväskylä – Kuokkala – Haapakoski (now Vaajakoski). Haapakoski had a Salvesen sawmill, so the passengers on the route consisted mainly of sawmill workers, managers, customers and other people working at the sawmills. There were three crew members on board, in addition to the skipper, the engineer / heater and the “ship boy”. In addition to his route, Toimi made church trips and pleasure trips on request, sometimes towing a barge if there was a lot of people.

The elderly Johnsson gave up his sawmill and sold Toimin to SOK, which bought the Haapakoski sawmill from Salvesen in 1917. However, a train track was built in Haapakoski at that time and bus traffic also started in 1925. – for the route. Only two years later, however, a ferry connection and a road were built in Säynätsalo, which reduced the profitability of the route. By the time of other transactions, Peura Toimin was weakly sold in 1934 to OY Keskus Ab, which needed a connecting vessel to Soisaari, which it had acquired as a recreational place for its personnel. However, the rides on Päijänne ended as early as 1936, after which Toimi was docked to wait for the future.

In 1938, Toimin was bought by a new owner, who transferred it to Keitele as a barge tug. However, wartime regulation – especially of fuel – made private motoring difficult and ushered in a “renaissance” of passenger steamers. The authorities therefore ordered back passenger traffic on the Sumiainen – Äänekoski – Suolahti route. In addition to passengers, Toimi’s tasks also included transporting mail. After the regulation was completed, Hämäläinen returned to barge towing, at the same time replacing Toimi’s old dry steam engine with a more efficient Compound machine equipped with a jet condenser. In these works, Toimi continued until the beginning of the 1960s, when the rise of the tourism industry opened up new perspectives. Indeed, the activity began to transport tourists, but after a good start towards the end of the decade, tourist flows began to run out and the ship stood still in 1968.

The operation changed hands again in 1973, with active steamers as buyers. In 1975, the company began major renovations, and the ship did not run a test run until 1983. A couple of years later, the ship was transferred to Saimaa. For recreational use in Saimaa, Toimi sailed until 2001, when it was sold to a new owner, who also owned the “I operate old home”, the Kuokkala manor built by Julius Johnsson. In terms of operations, the circle closed, and the vessel sails again in its original home waters in the Jyväskylä region.