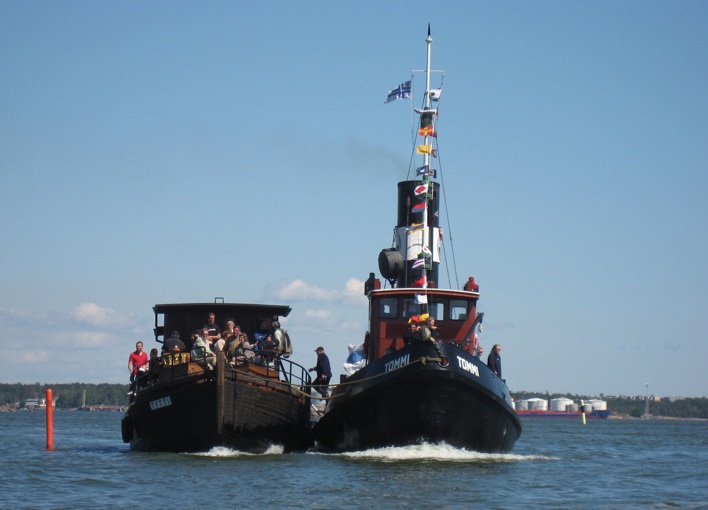 TID-class tugs were manufactured in England during World War II. The British Department of War Transport ordered these ships to replace ships already destroyed in the war, as well as for planned warfare. The design of the ships began in 1941 and the first ship was completed in 1943. Very detailed plans were made for the ships so that they could be manufactured in smaller blocks (8 pieces) in several different workshops due to the hurry. The blocks were first assembled at R.Dunston’s shipyard (158) and later also at Wiljam Pickersgill’s (24). Most of the work was done by women trained for the tasks. After the hull was assembled, the vessels were fitted with boilers at the Hessle shipyard. The pace of completion was quite fast, at best the ships were completed every 4½ days.

After the war, M.O.W.T sold these ships to France, Belgium, the Netherlands, Norway, Sweden and Finland. The Finnish state bought 14 of these vessels and S / S Tommi arrived in Finland with eight other vessels in November 1946. The state then resold the vessel to the Savon Swimming Association in 1947 and it was known to be a tugboat on Lake Saimaa until the early 1960s. The vessel was sold for private use in 1984.

S / S Tommi is the only TID-class vessel to enter Finland that has remained steam-powered. Others are scrapped or dieselized. Three TID-class vessels have also survived as steamships in England.

S / S Tommi is structurally in very good condition. Since 1994, the ship has, among other things, renovated crew cabins, renewed tubes, firebox shelters and built a surface condensing system. The bottom of the vessel was cleaned and the thicknesses of the plates were measured in 2006. The bottom was malted with zinc paint.

The ship is currently sailing alongside Saimaa along the Tyttieväskontti and the home port is the Laitaatsilla Shipyard area in Savonlinna.