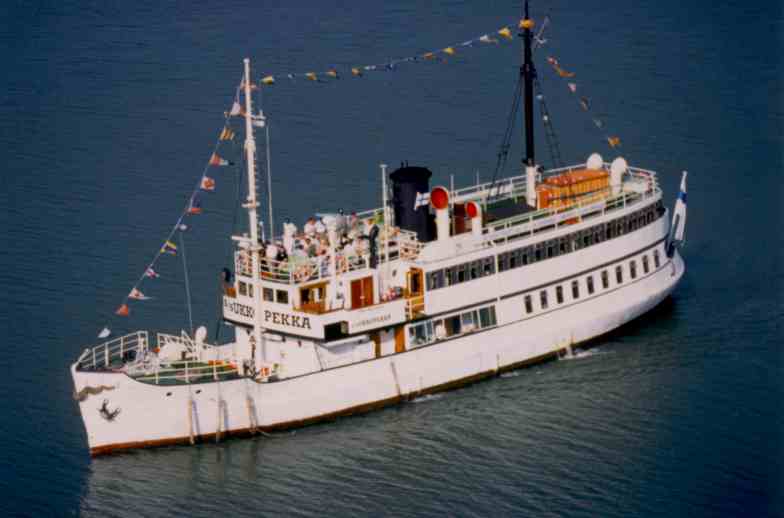 Ukkopekka was built at Hietalahti Shutter Shipyard and Konepaja in Helsinki in 1938 under the name Turku. The vessel served as the inspection vessel of the then Finnish Maritime Administration’s Turku pilot district, its main task being the maintenance and servicing of maritime safety equipment. Most of the work was done by replacing gas-powered lighthouses and beacons, as well as gas cylinders for line lights. The tasks of the then inspection vessel Turku also included the installation of buoys and the transport of fuel to lighthouses. In addition, the ship underwent pilot examinations and served as a pilot exchange site when shipping shifted to the winter lanes.

During the Second World War, the Finnish Navy took it over, installing a heavy anti-aircraft machine gun on the roof and bow deck of the 20 mm Madsen anti-aircraft gun. Deep bomb launchers were installed on the stern deck of the ship to enable the fight against submarines. A group of cannons stayed on board. Armed, it served as an escort vessel, in maritime traffic control missions north of Åland, and elsewhere in the Archipelago Sea. Other tasks belonging to the ship were e.g. fairway guarding and listening to submarines.

In the summer of 1941, the ship was given a special and long escort mission. The task was to bring the s / s Tornator cargo ship from Sweden to Finland on the route Åland Sea-Turku Archipelago-Bothnian Sea-Kvarken-Vaasa. The cargo was 5,000 tons of rye grains. The value of the cargo is illustrated by the fact that it was about one and a half kilos of bread grain for every Finn. The ship was also to take part in the battle of the Bengtskär lighthouse, but as it drove full steam in a hurry on unmarked fairways, it ran aground near Bengtskär with aircraft and weapons noisy in the background.

Escort Turku also participated in the “Baltenflotte” event in September 1941. A large number of German warships were present, including the battleship KMS Tirpitz to which Escort Turku was associated with the flag and flashing. Even the crew of the Turku ship visited the deck of Tirpitz, taking messages there due to radio silence.

After the war, the ship was used by the Soviet-led control commission in Finland, thus saving itself from forced surrender to the Soviet Union. At the end of the mission, it returned to its original mission. Turku was also used in winter as a harbor icebreaker and shipwreck ship. As early as January 1970, an old coal-fired steam boiler was converted to oil-fired and coke boxes were converted to oil tanks. For some reason, the boiler did not work properly and in 1978 the old boiler was replaced by an oil-fired steam boiler from the sea-going measuring vessel s / s Nautilus. The vessel retired at the end of 1979 to return to fairway work for another year due to the propulsion problems of the fairway vessel Seili.

After that, it waited for the demolition of Valmet’s Pansion in Turku, but it became privately owned and finally returned to its home pier on the banks of the Aura River in 1986 after various stages. The vessel was renamed s / s Ukkopekki by the new owner’s Pentti-Oskari Kangas family Steamship Company, known from the Seven Crazy Brothers Orchestra.

The Ukkopekka ship was named after the family’s son Karioskari Ukkopekka. This recently moved on to continue his father’s profession as master of the ship.

The restaurant premises were rebuilt in the winter of 1987-1988 at the Uusikaupunki boat dock. The handsome 52 brass-framed windows of the restaurant salons come from an old Polish passenger cargo ship that was scrapped in Naantali. The ship’s masts were shortened in the early 2000s to accommodate the Ukko-Pekka bridge.

The vessel has operated as s / s Ukkopekka in numerous Finnish coastal cities such as Helsinki, Ekenäs, Hanko, Uusikaupunki, Rauma and several municipalities in the Archipelago Sea area. It has also served as a showcase for the Turku region’s economy in Stockholm and as a restaurant ship for several winters in the port of Pirita in Tallinn during the Soviet era, and on the President’s cruise during a state visit to China’s