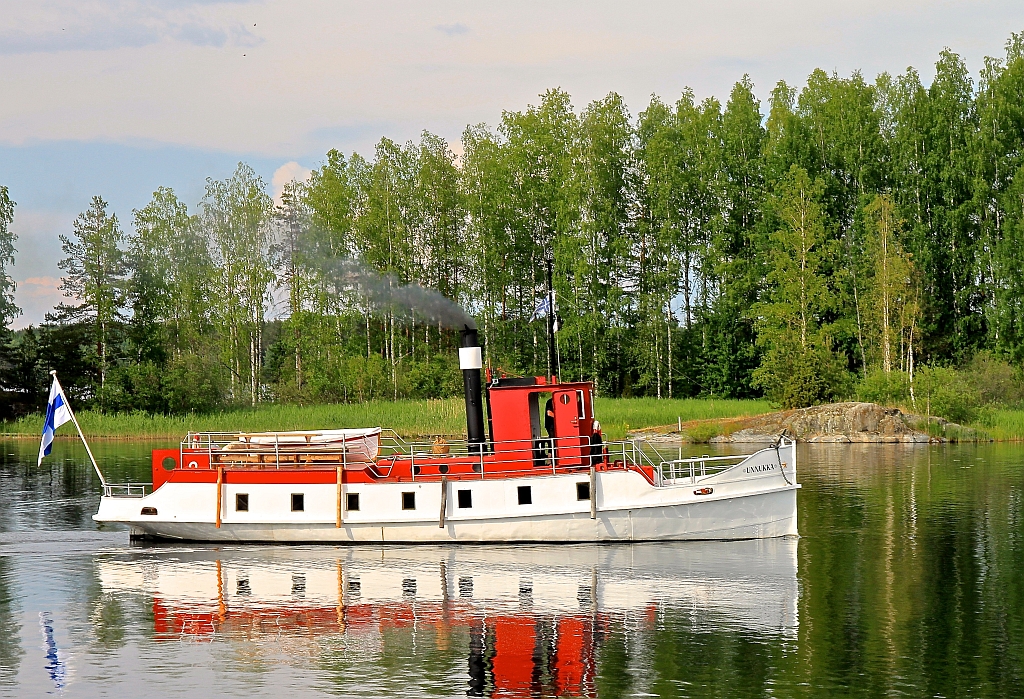 The story goes that Antti Juho Saarela, the young owner of Liukonsaari in Unnuka, Leppävirta, was late for a passenger ship in the summer of 1899 and, outraged by this, ordered a ship from Paul Wahl’s workshop. The ship, named Unnukka, was completed in the spring of 1900. During a test run on May 25, 1900, the ship reached a speed of 7.7 knots.

The 50-foot passenger ship was equipped with a cabin. The machine was a typical compound without a condenser and a boiler of the rapid type.

In its first summer, Unnukka started operating from the southern shore of its title lake from Saahkarlahti to Kuopio and departed at intermediate piers, for example in Paukarlahti, which was away from the standard routes of larger passenger ships. The following year, the route ran from Varkaus to Kuopio. On Sundays, church people were driven from the shores of Unnuka to Leppävirta, sometimes there was local traffic in the Kuopio region. The ship was commanded by Emil Siippainen from Unnuka’s Vuosalo Island and the engineer was his brother Enok Siippainen.

Saarela’s career as a shipowner did not last more than three years. He sold the ship to Lappeenranta A.J. Pastiselle. The vessel now operates in southern Saimaa. Pastisto, on the other hand, bought it from Pastinen, a cross-merchant Risto Tikka, as early as 1903, and Unnukka began operating in the vicinity of Mikkeli until 1911, when it became the property of Herman Saastamoinen, a Kuopio-based trade adviser. The following year, the vessel was transferred by rail to the Suisjoki Iisvesi port, where it was launched. Unnukka was converted into a tug for use at the Syvänniemi yarn spool mill in Saastamoinen, Karttula, and was named Keihäslahti. The vessel mainly operates in Iisvesi and Nilaka in the towing of the Saastamoinen plant and wholesale trade. Topi Björk.

1932 Keihäslahti was transferred to Kuopio by rail and lowered to Kallavesi. It worked e.g. Kusti Saastamoinen’s management as an arrangement tug at the company’s Haapaniemi yarn spool mill, Siikaniemi sawmill and Särkilahti plywood factory, as well as at raw wood bundling sites and as a barge tug until the late 1960s. A rarer work assignment came in the early 1940s, when the Valamo Monastery Brotherhood bought the Sainnamoinen Papinniemi Manor from Heinävesi. In the barges, Keihäslahti pulled the monastery’s furniture from Kuopio to the current New Valamo, while the monks guarded the transport.

The vessel was regularly refurbished at the company’s Haapaniemi shipyard. In the winter of 1946, it received condensed tar steam from Kouda.

When the vessel was absent from commercial traffic, Saastamoinen donated it to the use of the company’s fishing club. The danger was that the scrapman would hit his nails on the old ship. It was not far off to replace the steam engine and boiler with a diesel engine.

Following the change of ownership of the mills, Keihäslahti was transferred to Schauman and, in mergers, to UPM Kymmene. In the summer, guests of the factory were driven there and participated in the regattas of the Finnish Steam Yacht Association. In the middle of the last decade, the ship was left unused, and it stood on the shore of a plywood factory in Savonlinna, where it had been moved from Kuopio a couple of years earlier. When UPM put it up for sale, the vessel passed to its current owner and regained its original name.