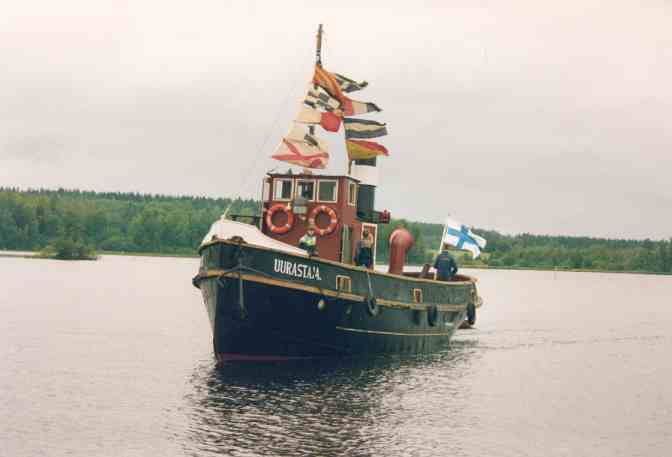 The tugboat, originally named Karl Boström, was ordered in 1908 from Paul Wahl & Co’s workshop in Varkaus by the forwarding company Karl Boström from Hanko, according to which the vessel was named, as a harbor tug in Hanko. The 140-hp steam engine of the twenty-meter tug gave the ship an initial speed of 11.5 knots. In 1914 the ship was sold to Vyborg by J.W. To Paulin. In 1917, J.L. Grönroos. On the night of April 29, 1918, just before the whites conquered Vyborg, a group of reds robbed Karl Boström of Revonsaari and fled it with more than a dozen other ships to St. Petersburg. Once there, they opened the bottom taps of the ship, sinking it into the Neva. However, the ship was later lifted and returned to Finland in accordance with the Tartu Peace Treaty. Its next owners were Tukkukauppa & Laivaliike Hansa O / Y and from 1925 Wiipurin sawmill.

The service period in the possession of the Wiipuri sawmill was short, because already five years later the tug named after “Uurastaja” headed to Saimaa. Kaarlo Pöyhiö from Lappeenranta is mentioned as the owner, but he probably only acted as an intermediary, because the ship continued its journey immediately to Varkaus and from there by rail to Suolahti in the service of Suolahti Factories. The ship was Keitele’s strongest tug. In 1944, the Pioneer collided violently with a ship named Uhma. The defiance sank immediately, but was lifted after a couple of days. The pioneer survived with less, though its bow suffered severe damage. However, personal injuries were avoided, as if by a miracle trade.

The lord continued towing until 1960, under the Rauma-Repola flag for the last decade. It remained standing until it began to be scrapped in the late 1960s. I had time to remove my chimney, boiler and steam engine from the ship. The Rovi was sold and turned into a Diesel Ship. Only a year later, in 1972, it changed hands again. The new owners of the Lord once again become a steamship. A diesel-powered Vapo tug Heikki received a boiler, and the machine – although smaller than the original – was bought in Kuopio. The pioneer thus returned to traffic as a steamship. It has been sailing in both Keitele and Päijänne since the canal was completed.