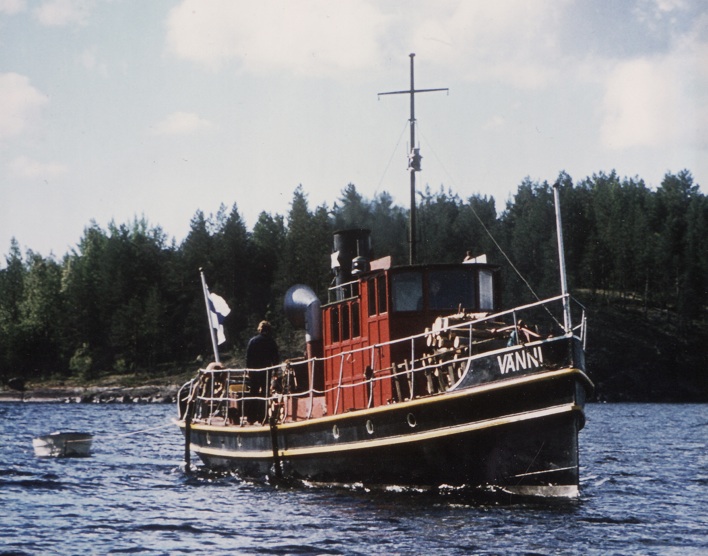 The Finnish yarn spool industry was born in 1873 when three factories were established in different parts of the country in the same year. However, only one of these, the Kaukas Rolling Mill, survived the next decade. 1887 Wolter Ramsay, the manager of the Far Factory, resigned to set up his own factory. He chose Lahti as the place mainly because of the good transport connections: on the shores of Lake Päijänne there was relatively the most birch used as a material for wire spools in Finland, and thanks to the Vääksy canal it could be obtained from all over the shores of Lake Päijänne. In addition, Lahti was along the railway, which enabled the export of finished products. According to the Latin word for lathe, the factory, named Tornator, was successful and expanded its production, which was initially exported mainly to England, and then increasingly to Russia. After Ramsay’s death in 1892, the Wulff brothers, who took over the company, made a strategic change. In 1895, the company established a wire spool mill, a wood grinder and a paper mill in Tainionkoski. Transportation was easy to arrange for the three plants jointly, in addition to which the Finnish power of the rapids and the proximity of the Russian market helped. The focus of the company’s operations shifted to Tainionkoski, with Lahti remaining secondary.

However, the Lahti plant continued to operate. As Tainionkoski focused on Russian exports, the Lahti plant produced rolls mostly for Western markets. A contract in 1905 with the world’s largest yarn manufacturer, the British J. & P. ​​Coats, guaranteed the factory full employment for five years. In 1907, Nils Hornborg, who was appointed factory manager, decided to have a tugboat and barges hired to ensure adequate supply of raw materials. Previously, transportation services had been purchased from other entrepreneurs. A suitable tug was found nearby: Mattson, a Lahti-based brewer, had built a steam tug “Sven” six years earlier in 1901 at the Porvoo machine shop to carry out chartering operations. The ship was brought in parts by rail to Lahti, where assembly and equipment took place. When completed, the Sven was one of the most efficient tugs in Päijänne, 83 years old, judging by the fact that the “Jämsänkoski” equipped with an 80 hp machine, which had been completed two years earlier, was mentioned as the most efficient tugboat in the water system. Tornator had been a customer of Mattson and Sven from the beginning, so the ship was already familiar to the factory. In principle, it continued in its former mission, towing four barges loaded with two-meter birch props for the needs of the rolling mill, the only difference being that it was now used only by the Tornator mill.

Sven’s efforts in the service of the yarn spool mill went smoothly. The ship was a familiar sight in the harbor, and the people knew it as a familiar “Crank”. This name was later officially given to the ship. As for the factory, everyday life was cut off by a fire that badly damaged the factory in 1917, the subsequent reconstruction of which was hampered by the Civil War. At the same time, the broken trade relations with Russia drove the whole company into trouble, and in 1918 Eugen Wulff decided to sell all his shares to the independent Finnish state, which thus became the company’s main shareholder. At the same time, the State also acquired a majority stake in Enso Gutzeit Oy. The companies continued to be separate, but in 1931 Gutzeit bought most of the shares in Tornator’s minority shareholders and the following year in state shares, when Tornator was effectively merged with Enso Gutzeit. Although the official merger did not take place until 1942, the acquisition of wood – and with it the ships – passed to Gutzeit in 1932. In this way, Vännik became the symbol of Gutzeit’s white star in his chimney. However, it was allowed to keep its name, unlike most of the vessels acquired in Enso’s fleet.

Vänni, which originally towed to the Lahti roller mill and held its position in Anianpello, was transferred to Pohjois-Päijänne in 1947 after Joh. Parviainen’s mills became the property of Enso Gutzeit. Vännti now became a tugboat for the Säynätsalo factories. It got the skipper Liebe Salminen, who deservedly took charge of the ship until the end of its commercial traffic. 1955 Vänn’s towing tasks ended and the ship stopped in Säynätsalo. In 1965 it was bought by a private owner who, however, did not drive it. In 1970, he resold it to a new owner who was passionate about steamships on his uncle’s ship. On the side of the Kaima ship, Vänni was towed to his new home port of Pulkkilanharju, the ship’s machine had been dismantled and the deck structures had been largely destroyed. A major overhaul of the ship began on Pulkkilanharju: the machine was assembled and the deck structures were built. Vänni continues to sail in the waters of Päijänne – more than forty years later.