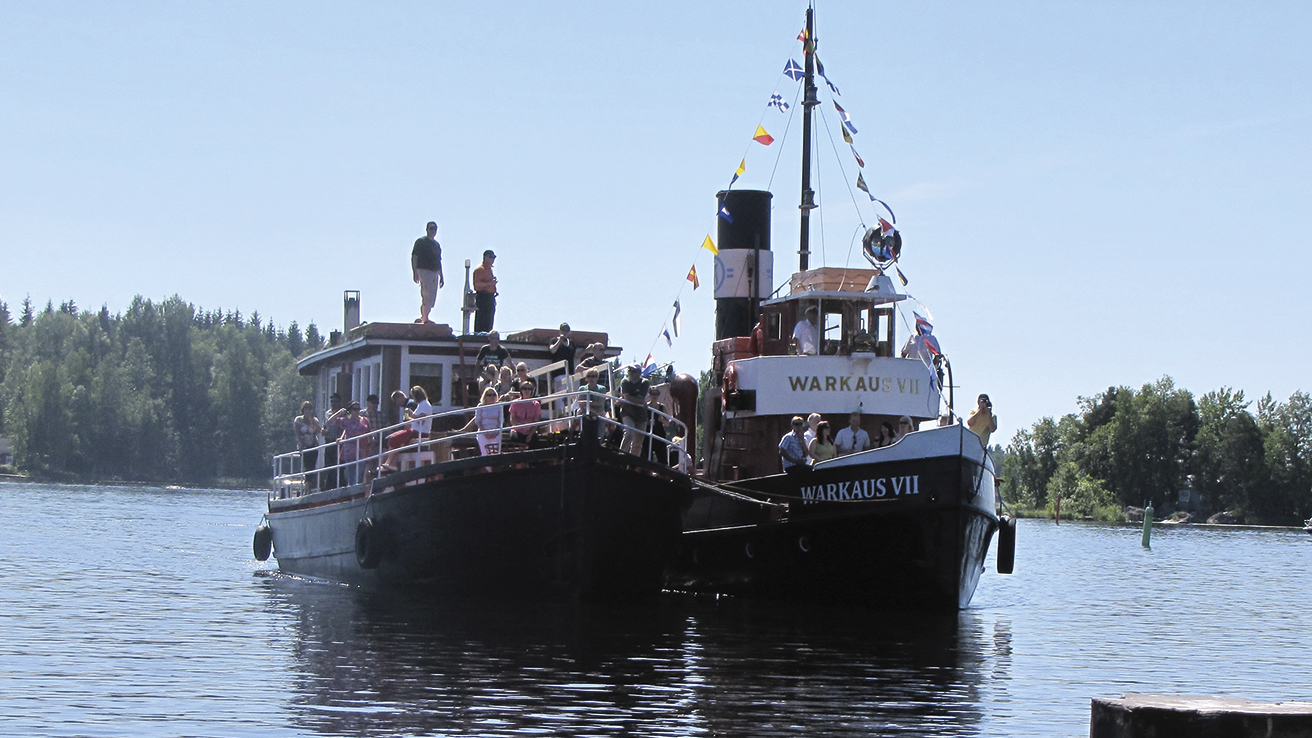 Warkaus VII was built for the use of A. Ahlström as a tug at its own shipyard in Varkaus in 1913. The shipyard had been transferred to the company after its acquisition of Paul Wahl in 1909 (see Warkaus). The ship was designed by Johan Valpas Pulliainen, a renowned general shipbuilder, who designed about a third of the ships built by the shipyard.

After the Second World War, Warkaus VII was one of the inland waterway tugs forced into demining in the Gulf of Finland. It was fitted with a 20mm Madsen IT cannon and served two non-commissioned officers in addition to the seven-man crew. In 1946, the ship suffered severe damage at the Porkkala lock when the clearing equipment was lifted after the mine exploded on its stern side. However, the ship was repaired and after repairs it continued its clearing work: in total, it destroyed 47 mines during the 1946 sailing season. It was returned to its owner, Ahlström, the following summer.

After the demining work, the ship underwent major renovations. Among other things, it received new deck structures designed by Franz Leimgruber, an Austrian-born technician who worked in the drawing office of the Pirtinniemi machine shop. In that outfit, it still is. In addition to normal timber towing, the renewed ship’s program included the towing of warships built by Ahlström’s shipyard to Lappeenranta, from where they were further transported by rail to the seafront for final supply. However, timber was mainly towed mostly from Suovo and Kallinsalo, north of Varkaus, sometimes from the south, such as Puumala or Ristiina, and in the summer of 1950 from Puruvesi. In general, however, Warkaus VII was the ships of the northern part of the watershed.

During the 1950s, more and more Ahlström’s ships were finally left standing. However, for Warkaus VII, work continued until 1968. All other ships in the company were sold, with the exception of Warkaus VII, which moved from the decommissioning Ahlström Transport Department to the books of the Museum of the Varkaus Factory as a museum ship. It stood at its old pier in Pirtinniemi and began to slowly decay due to lack of use. 1974 Pertti Virtanen visited the museum looking for information about the Uurastaja he owned in the machine shop and museum archives. At the same time, he told museum director Tapio Kautovaara and the editor of Warkauden magazine present that Warkaus VII would become a functioning representative ship with which the company would be able to chase its guests. Ahlström also supported this idea, especially the forester Juhani Laitinen. Thus, the refurbishment of the ship began in the spring of 1979, when the project had received the blessing of the company’s CEO, Lars Mikander.

The bottom of the ship was first refurbished in Savonlinna at Rauma-Repola’s Pääskyniemi shipyard, after which it was towed back to Varkaus, where its boiler and machine were refurbished in a workshop. In the late summer of 1980, the vessel was put back into service and became a representative ship managed by the company’s forestry department, which was in active use from the beginning. It has remained in use, being in cruise traffic mainly in the waters near Varkaus. On its side, there is now a barge “Eija” built for Enso Gutzeit in 1937 at Laitaatsilla to bring extra space. Warkaus VII has 60 passenger seats, in addition to which Eija has a sauna and a salon for 30 people.