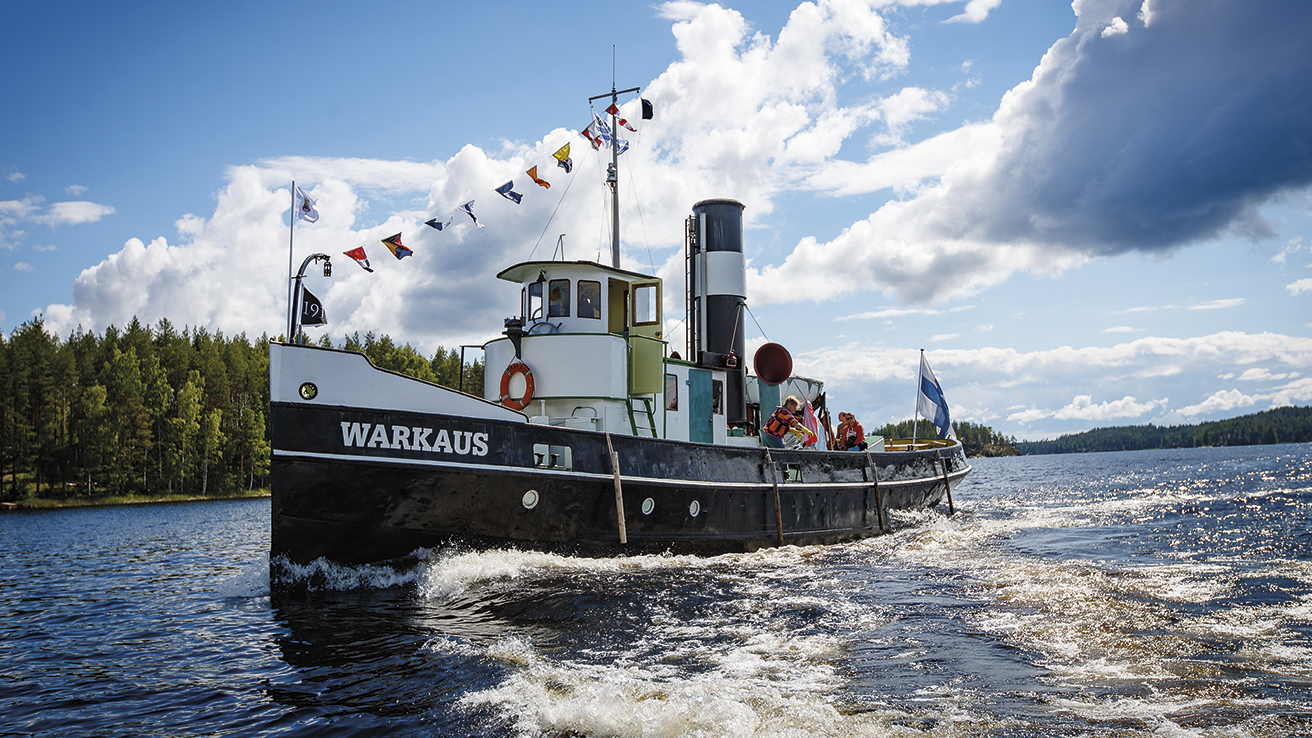 Warkaus was completed in an interesting transition phase, where Paul Wahl & Co from Vyborg had sold its Varkaus factory with its ship sculptures to A. Ahlström Oy in Noormarkku. The Warkaus are the last ships to bear the name of Paul Wahl on the nameplate, but it was already built at Ahlström’s expense.

Ahlström acquired the vessel as a line tug and, if necessary, as a port icebreaker. In its year of graduation, however, it was leased to Halla. In Ahlström’s works, its most common towing routes were from Palok in Heinävesi, Kallinsalo in Muuruvesi, Suovu behind Kuopio and Maaninga from the Ruokovirta canal to Varkaus. However, the ship was also seen on the Joensuu route, in Pielinen, Iisalmi and Juojärvi. In late autumn and early spring, Warkaus acted as a harbor icebreaker at the factory’s wood warehouse. The tugboat’s daily life was interrupted by the First World War in 1914-18, when it was forcibly taken to the Russian state by the Suomenlinna Fortress Board.

The everyday toil of Warkau was interrupted by a couple of events: in 1928, it was involved in a collision in which the passenger ship Orivesi chased it to the side in the port of Joensuu, causing great damage. They were repaired and the contract continued. In 1938, the ship underwent major renovations and received its current deck structures. Its boiler was also renovated. During the Continuation War, the ship was again taken over by the army – this time Finland – as a maintenance and evacuation ship to Saimaa. Eino Pietikäinen, who was the heater in Warkause in the summer of 1941, told Korsteeni magazine in 2004 that the ship was towing at that time, mainly on the Joensuu route. The ferries were most often picked up from Ahlström’s bundling site on Pesolansaari. On a few occasions, Warkaus also towed ferry ferries from Joensuu and from the mouth of Höytiäinen over Pyhäselä to be bundled in Pesola. Kolovesi was also visited from time to time.

The ship’s commercial traffic period ended in 1955, when it remained in reserve in Pirtinniemi, Varkaus, with several other company’s ships. Gradually, ships began to be sold to scrappers or for private use. It was Warka’s turn in 1968, when it was bought by a group of young people named “Lirimassen” from the Helsinki metropolitan area who were interested in getting a ship for themselves. A harsh refurbishment operation began, with the help of an experienced Ahlström engineer. After standing for more than 10 years, there was, of course, enough work to be done, but in July of the same year, the journey to Porvoo Pörtö might begin. On the way, Warkaude became the first steamship to pass through the new Saimaa canal. After this, the ship was sailed at sea for another couple of years until the crew decided to sell it.

The new buyer, Juhani Salovaara, continued the renovation work and installed an oil burner on board. The high-power steam turbine burner found in Katajanokka, a cargo ship that is being dismantled, is quite a rarity, at least in Finland; for example, in the Netherlands this construction is more commonly used. Salovaara sailed on the ship for a few summers in the waters of Helsinki and Hanko until she decided to buy your beer Svanhild. The new owners of Warkau moved the ship back to Saimaa and continued to rehabilitate it. Ristiina has become the ship’s home port.