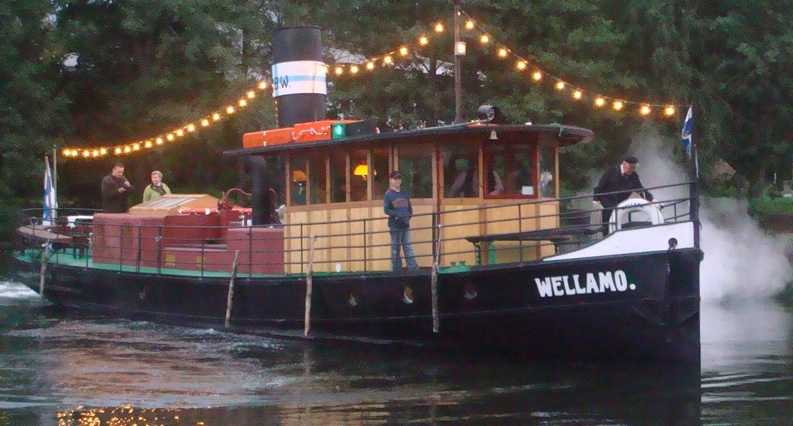 From the very beginning, the paper mills in Valkeakoski, founded in 1871, had to resort to water transport in their operations, both in the procurement of raw materials and in the transport of the mill’s products by rail. First, other ships were used, then smaller vessels of their own. At the beginning of the 20th century, however, the mills invested heavily to increase production, which made the transport capacity of Ab Walkiakoski’s fleet insufficient. At first, it was thought to completely renovate one of the company’s old ships, but eventually it was decided to order a completely new ship.

The ship, christened Wellamo, was completed in 1907 from OY Sommer, Af Hällström & Waldens’ Tampere workshop. As the water route from Valkeakoski to the trackside – either to Hämeenlinna or Toijala – had to be kept open for as long as possible, the vessel was planned to break the ice. It was also made the company’s strongest vessel: the combined power of the two steam engines became 170 indicated horsepower. The crew – which had ten people in Wellamo – was employed by the company all year round: the ship’s officers spent the winter as forest foremen, the engineers in the workshop and the barges in the forest. In practice, the ship usually did not stand for long: Traffic continued until Christmas, sometimes until January, and the ship could be launched as early as February, when the opening of the fairway began. Attempts were made to facilitate the opening of the fairway by, among other things, driving coal and ash onto the ice, which made the ice more brittle when the sun was shining, and Wellamo was able to break it. The ship half rose on the ice and crushed it with its weight.

All of Walkiakoski’s ships, which in 1934 became part of United Paper Mills OY, had their own traffic areas. Wellamo’s task was to tow barges in paper or pulp cargo from the mill to Hämeenlinna, bringing back chemicals, for example, to the mill’s needs. Wellamo was the pride of the factory and an “admiral ship” that also served as the company’s representative vessel, transporting, for example, General Mannerheim and his entourage several times to Professor Granberg’s villa in Kangasala. Later, the ship carried the company’s guests from time to time. In April 1918, Wellamo also served as a warship as the Reds withdrew from Tampere.

Wellamo was refurbished in 1954. Its wooden deck structures were replaced with metal ones, and the boiler was almost completely refurbished: the old end plates were retained but almost everything else was refurbished. Renovation had been planned for a long time, new steel plates had been acquired as early as 1944, when the wooden deck cabin had also been renovated the last time. A little later, we also switched to oil heating. The renovated Wellamo was honored to open a new canal in Valkeakoski in 1955.

In the late 1960s, the future of Wellamo began to raise questions. It was planned to convert the ship into a water bus, and in -68 it was inspected as a passenger ship. The following year, Wellamo already had time to land, but was soon lifted back to the shipyard, where it stood all summer. It had been replaced by a new motor tug “Wanaja”. The wood harvesting of the combined paper mills in Valkeakoski ended in 1971, when the time of Wellamo’s decay began. The ship rusted, collectors detached parts of it for their collections, and the movable equipment was destroyed in a fire in the shipyard’s warehouse. Wellamo was not forgotten, the historical value of Finland’s last two-engine steamer was understood in the area and its renovation into a museum ship was planned. However, due to lack of money and resources, the ship continued to stand until it was scrapped. However, the information carried the ears of a private steamship enthusiast who bought the ship in 1981 and began refurbishing it. The ship, which had reached a rather poor condition, required almost complete refurbishment.

Once the refurbishments were completed, it was time to secure the ship’s future. UPM, which sold the ship, did not want to exercise its pre-emptive right and the ship was sold to Walkiakoski Höyrylaiva OY, a non-profit limited company established for this purpose.