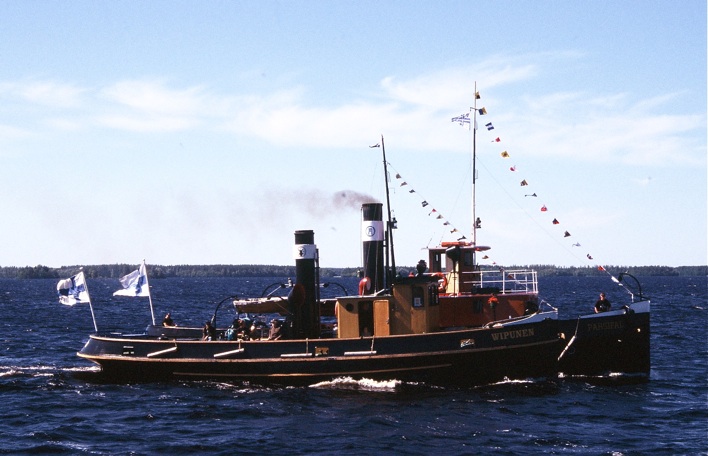 Gust from Kuopio. Ranin developed into a significant trading house in the second half of the 19th century. Ranin, who started trading in grain and salt, moved into the burner industry in 1859, and the ban on home burning in 1865 made this quite a gold mine, especially when Ranin was granted privileges in 1869. The mill, bulb and brewing industries formed the backbone, from which the business name expanded to brokerage and general merchandise operations and later also to the sawmill industry. With the Prohibition Act, operations focused more on mills and sawmills.

Large freight traffic also required a fleet. The handsome cargo ship Panu was acquired in 1899 mainly to transport grain to St. Petersburg. The ship still exists and is being rehabilitated back into service. In 1907, the business name acquired the tug “Wipunen” to take care of the barge transportation of the logs and wholesale goods needed by the company’s industrial facilities. In Wipunen’s original outfit, attention was drawn to its shallowness, its wooden cockpit was made low to fit under a low bridge to Ranini’s grain warehouses in Soinlahti. The mast and chimney were tiltable, and even the headlights were located on the sides of the cockpit and not on the roof like most ships.

Wipunen was mainly a barge tug, which transported the products of Ranin’s wholesaler to merchants all over North Savo and Karelia and brought logs on the return journey. In 1918-19, although it also visited Vyborg, it was mainly a northern ship. During his entire professional career, Wipuse had only two managers, Juho “Jussi” Uosikkinen and later, from 1936, his son Eelis Uosikkinen. The latter describes the ship’s voyages in Korsteen in 1986 as follows: We had six crawls and were then brought in on the way in. Raninen sold halakas and it had a brewery, it was as if everything had to be heated with trees at that time. ” Uosikkinen had a credit position in Ranini’s company, they carried out their work quite independently. During the winter, the captain bought the halos from the provincial hosts delivered to the beach, and thus knew for himself where to pick them up in the summer.

Wipuse had a rather small crew of only four: two at the top and two at the bottom. There was no hostess, but the food was made by yourself. According to Uosikkinen, the diet was fish-focused: “once, nine fish soups were made in a row”. There was time for angling while waiting for the barges to load, which lasted two days. “It doesn’t linger any further. Yes, they are terrible, three men when they stabbed 450 cubes for two days. ” The larger barges had a crew of three, the small barges of 200 cubic meters had two. Ranini’s halos were unloaded in the passenger port at the company’s factories and warehouses. The barges took care of the trees on the edge of the barge, from where they were transported by horses to the stack in the mill yard.

Before the wars, the deck structures of Wipunen were rebuilt, became even taller, and made of iron. Electricity had been received on board in the late 20th century. During the Continuation War, Wipunen, like many other ships, participated in evacuation transports, returning to his normal duties after the war. Shortly after the war, however, the transport of goods by Ranin’s wholesaler ceased, and Wipunen focused solely on towing log barges. It then towed until 1969. This last summer was still a full sailing season for Wipuse, but after the Ranin mills moved to oil heating the following year, the transportation of logs ended. However, Wipunen did not stand still, but was used for private and representation trips. Uosikkinen also continued as the captain of the ship long after this. Wipunen is still employed by the same company, steaming in Saimaa’s home port of Kuopio.