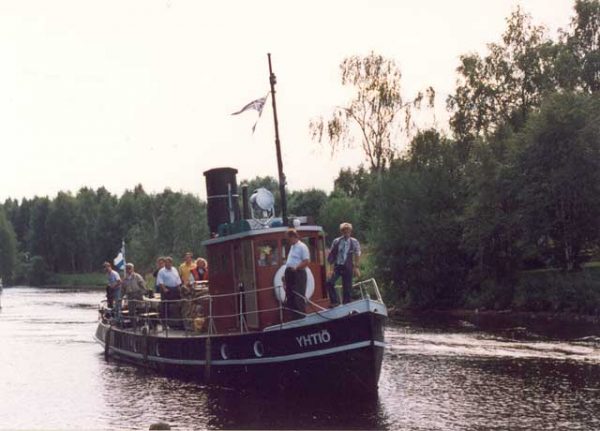 The year of construction of the company is mentioned in some sources as 1870, but in fact its story begins in 1877, when Ääne-Haapakoski Uittoyhtiö started its operations. A couple of years earlier, the large forest companies in the Kotka region had established the Kymi Ferry Company to take care of the Kymijoki river, a new company was established by the same parties to take care of the northern parts of the water body. When it started operations, the new company decided to purchase a portable steamer from the Paul Wahl workshop in Varkaus to Haapakoski to help assemble log ferries. The ship, named “Company,” completed in 1878, was originally a beveled and open-toped toaster with a canopy and “a platform on top of the boiler from which the driver could see the summer roof over where to drive”.

In the old days, ropes had been used in sparrers, and wire splitting equipment was changed to the Company in the early 1890s. At the Haapakoski (now Vaajakoski) separation site, the trees that came loose from the headwaters of the watershed, Keitele and the Saarijärvi and Rautalammi routes were separated by owner, after which the Company arranged the loads for larger tugs. In the spring, it drove along the Päijänne, moving small batches from the beaches to the main roads, and in the autumn, collecting loose trees from the shores as well as transporting equipment and breaking ice. In addition to its actual work, it made at least one pleasure trip: “Suomalainen” magazine describes 21.7. 1890 A sobriety club pleasure trip to Ilmoniemi on a barge towed by the company. There were almost 300 participants and “otherwise the mood was very hilarious all the time, both on the way and on the way in the barge, the youth waved at the circuit jump”.

The 50th anniversary publication of the Kymi Swimming Association reports that the company moved the ship to Keitele in 1902. However, this is uncertain, as Päijänne Rederi Bolag (a subsidiary of the Kymi Ferry Association founded in 1888 whose activities ceased to exist and the property was transferred to the Float Association in 1908) announces that it bought the vessel from Pohjois-Päijänne Ferry Company in the same year. There are no other archival sources from a possible visit to Keitele, but a few records tell us that the ship was there. However, it is clear that the Company worked in Haapakoski in the early 1910s and continued its work until 1966. The ship, owned by the Swimming Association, was in the care of Posti’s family for decades. In 1921-1966, the ship was staffed by the renowned sailor Heikki Posti, who from 1938 also served as the ship’s captain. His legacy later continued on the Company ship, as the ship passed into the ownership of his family in 1990.

The company, like other old ships, has undergone many transformations along the way. Originally an open deck toaster, he was driven to KLY’s Heinola workshop in 1916, where a closed deck and a driving cabin were built on the stern side of the chimney. At the same time, the sloping bow became vertical. In the winter of 1939, it was made a tug, as towing below separation was considered cheaper than toe. A new wheelhouse was built on the ship, this time on the bow side of the chimney. A new machine had been installed at the Väinölä workshop in 1926, and now it was accompanied by a new boiler. A Kort tunnel was also installed to improve towing capacity. The deck structures were last renewed at the Väinölä workshop in 1951, when the ship got its current appearance.

The floats of Päijänne changed radically in the mid-1960s. The wood began to come pre-bundled on the train ride. The company’s big toads were sold for scrap and replaced with strong diesel tugs. Only the smaller Company was saved, as when the ship was to be run at the centenary of 1978. From the Floating Association, the ship passed into the possession of a new owner on the condition that it had to be kept steam-powered at least until 1980. During the cage, oil heating was installed in the Company for the centenary drive, but it was never used. The company was transferred to new owners in 1976. The ship was first converted back to logs. The following summer, 10 years after stopping the last load, the Company again drove the waters of Päijänne. Since then, the ship has changed owners on a couple of occasions.