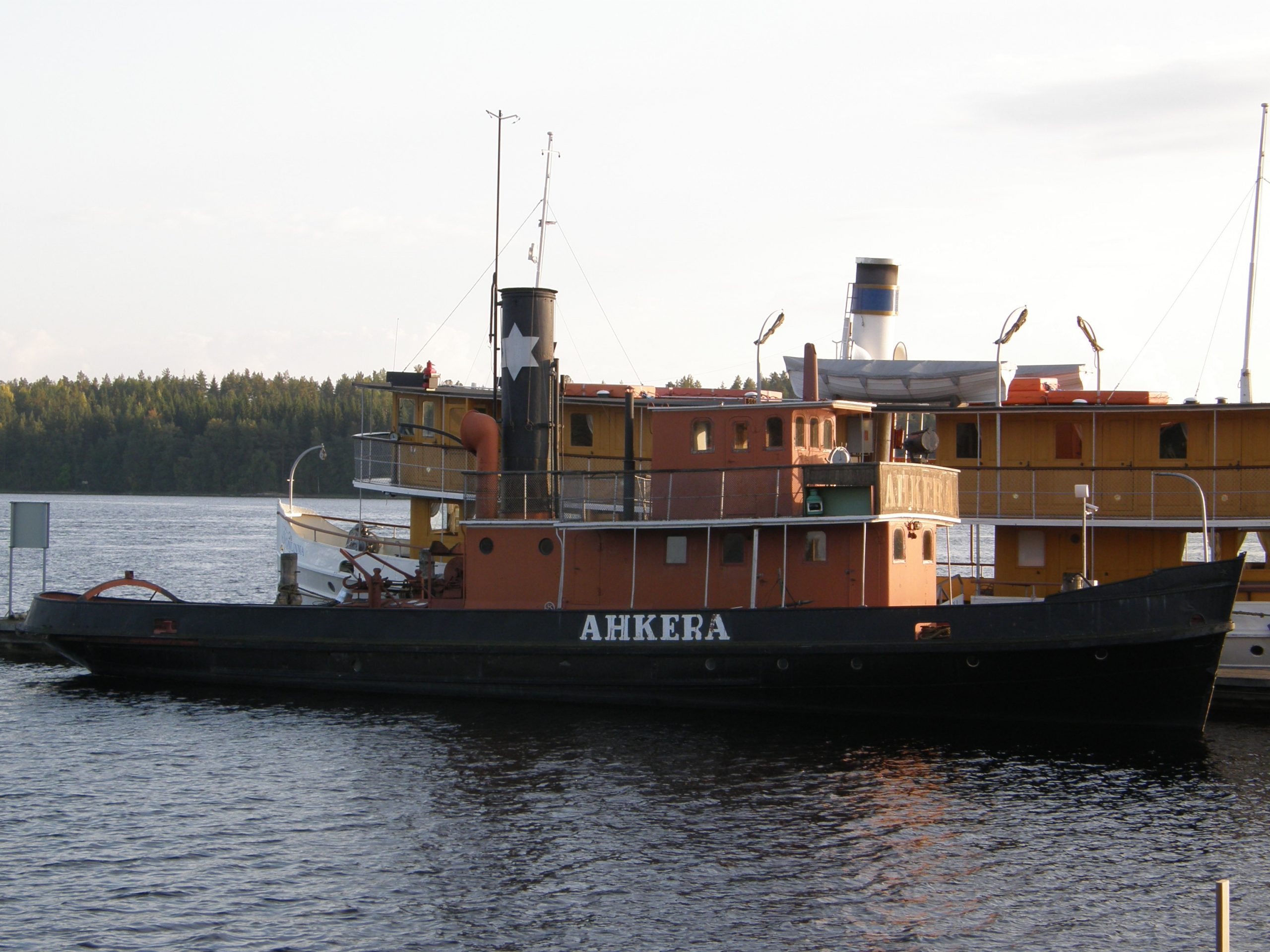 In 1870, businessmen and sawmill owners from Joensuu, Simo Parviainen and Antti Mustonen, ordered a steam tug Ahkera from Paul Wahl & Co’s shipyard in Varkaus to drive log ferries and barges. Later, the vessel was taken over entirely by Mustonen, as were many sawmills. The main task of the ship was to tow ferry carriers from Mustonen’s sawmills from Utra and Puhos via the Saimaa canal to Vyborg. As a return freight, a variety of goods were brought to Mustonen’s trading room. Towing trips could sometimes extend as far as St. Petersburg.
After the death of Mustonen, who had amassed huge fortunes from a modest beginning and gained the value of a commercial adviser, his giantly fortified assets disintegrated. Sawmills, forest and furniture – including Ahkera – were transferred in 1881 to the Branch of Egerton Hubbard & Co. in St. Petersburg, England. However, Hubbard’s transactions did not go very well: there was a dispute with competitors about the Pielisjoki floods, and the recession reduced the demand for timber, which often required ships to stand still. Under Hubbard, Ahkera continued well into his familiar duties since Mustonen’s time. The ship’s original machine was quite weak, 35hp, so it was able to slowly tow 3-4 lots. It didn’t have much time to travel in the summer. In the midst of everyday toil, one event emerges that Ahkera was able to witness. On September 13, 1898, near the splendor of Puumala’s Parkonsaari, the steamship Ilmari drove the passenger ship Salama (link) to the side and sank this. Ahkera, who was nearby, unloaded his load and hurried to the scene of the accident to rescue those passengers who had not been caught in the boats.

In 1899, Hubbard was transformed into a Finnish company called Ab Utra Wood Ltd. In 1900, Ahkera was renovated at the Paul Wahl shipyard, where it was still equipped with a boiler and a large compound steam engine. The deck structures were also redesigned, with a cockpit and a slightly lower Messi and hood behind it. During these times, the sawmill industry finally started to turn for the better, but soon the situation in Finland began to become politically uncertain, which made foreign investors especially cautious. In addition, Utra’s facilities had not produced for the British as desired. Thus, when Gutzeit inquired about the possibility of a merger – where even the entire Gutzeit company would have been transferred to Hubbard, the latter offered Utra Wood to buy Gutzeit.

With a loan from Norway, he grabbed the offer, and Utra Wood became Gutzeit’s own in 1902. According to the deed, Utra Wood’s ships Sukkela (which was soon exchanged for Ledereenranta’s Cederhvarf “Selma”), Toimi and Ahkera Gutzeit’s growing fleet also passed. At the same time, Ahkera’s tasks changed: it was set for the line towing of cableways from Kuopio and Joensuu to the Rutola overhead export facility. Gutzeit did not consider it sensible to continue sawing operations in Utra, but it was considered more advantageous to swim raw wood through the Saimaa, Rutola overflow plant, the intermediate route and the Kymijoki river to the Kotka sawmills. In addition to bundles, Ahkera occasionally towed wood chips to pulp mills with lots. From time to time it also worked in the waters of Kotka.

The 1920s brought a new transformation to Ahkera. The wooden structures need to be renewed from time to time, which we finally got tired of. The diligent apparently got steel decks and deck structures at the Lypsyniemi shipyard, which now also included a top deck with bridges, helmsman and captain’s cabins. After the Second World War, the connection from Saimaa to the sea through the canal was cut off. However, warships and inland waterway vessels destined for demining were transported by rail. The crowd went to Kotka as Ahkeraki’s harbor tug. However, while assisting the ocean liner, the tow rope hung and Ahkera sank, after which it was rushed the same way back to Saimaa. It was considered too hesitant to be a harbor tug. Indeed, the diligent tug of bundle ferries usually continued between Savonlinna and Vuoksenniska until it was taken out of service in 1958. Most of Gutzeit’s ships were either sold, dieselized or scrapped. However, the diligent, who was the oldest of the company’s ships, decided to renovate it into a museum ship. This happened, and in 1971 the ship was lifted on a pedestal in front of the Laitaatsilla shipyard until it was handed over to the Savonlinna Provincial Museum as a floating museum ship in 2002. Ahkera spent the next decade at the Riihisaari museum pier. In 2013, its ownership was transferred to a support association, which transferred it to Kanavansuu shipyard in Lappeenranta for refurbishment. Riihisaari will remain the ship’s home port.