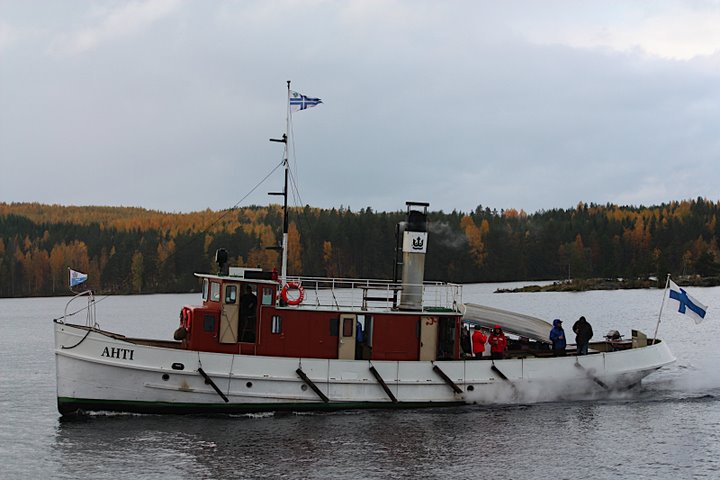 S / S Ahti was built in Helsinki in O. Eklund’s workshop in 1892. The customer was Oy Fiskars Ab, which gave the ship the name Fiskars. Since then, after the company acquired a second Fiskars tug, its first bow was named “Fiskars I”. It is clear from the ship’s surviving order book that special attention was paid to the interior of its captain’s and engineer’s cabins. The vessel was registered in the Ekenäs Ship Register under number 22. Its main task was to tow log ferries from the company’s own forest areas to the Skogby (Lappohja) steam sawmill. In addition, its tasks occasionally included barge transportation of the company’s ore exploration equipment. During the years of the Second World War, Fiskars tugs served in the Defense Forces, handling e.g. freight transport by barges to coastal forts. After the wars, in 1945, it was decided to sell the ship to Särkisalo for businessman Eino Löflund, who named it Ahti. Renovations were made to the cabins, deck and hull in Ahti, after which it towed raw wooden rafts and log barges in the Archipelago Sea. Most of it towed mining logs and paperwood to ship loading bays. The logs were exported mainly to England, paper wood to Germany. Logs, on the other hand, were towed mainly to Turku. After a couple of summers, however, Löflund sold the ship to Metsäliitto in 1947.

In the same year, a number of private forest owners had formed a cooperative with Metsäliitto, the purpose of which was to procure and sell timber and the forest industry. Metsäliitto initially moved Ahti to Saimaa, where it towed timber barges from different parts of the water to Lappeenranta, from where they were further transported by rail to Hamina for loading on seagoing ships. From the beginning of 1952, the ship was repaired again, and in addition to the renovation of the cabins, it received a steel deck and electric lights. The following year, Metsäliitto moved it to Päijänne, where it was renamed “Saitta”. Saita’s main task was to tow cableways to Saita’s sawmill in Vääksy. The owner also had a smaller “Saitta” at his disposal, which was now followed by “II”. In the mouth of the people, the boiler of the ship known as “Pikku-Saitta” was later changed to “Isoon-Saitta”. As the number of log bundles in Päijänne decreased, Metsäliitto decided to move the larger Saita back to Saimaa, which took place in 1958. As in the previous transfer, the water change caused problems when the ship was successfully lifted to the railway carriage with a third attempt. In the first, the hoisting crane fell over the ship, in the second, the breaking of the hoisting wire caused the ship to fall back into the lake. However, damage was avoided.

After the transfer, extensive alterations were made to the vessel at the Pääskyniemi shipyard in Savonlinna. A more powerful aircraft was transferred to the ship from the old “Lehtiniemi” ship of the same owner, its appearance and interior were completely renewed and it was renamed “Liitto”. Completely refurbished, the ship still served a long time, although more changes were made five summers later, when the Alliance was made oil-heated. A diesel unit generating the electricity required by the burner was placed on the deck level to reduce the noise level in the engine room. To protect the unit, the deck structures were continued in reverse. Metsäliitto used the Alliance to tow bundle ferries to the Lehtiniemi sawmill north of Savonlinna, apparently also to the Metsä-Saimaa mills in Lappeenranta, until 1971, when it was Saimaa’s last steam-powered line tug. At least Tapio and Vetäjä V of the steam tugs were still in use on other waterways. The following year, the ship, which had made its last towing voyages, was found by a private person looking for a steamship. The owner removed the vessel from the merchant vessel register and returned the second name “Ahti” to the vessel in that order. It was transferred to its current owner in the late autumn of 2003. Ahti was returned to log heating by the Tradition Association in 2011. The home port of S / s Ahti is currently the port of the Kanavansuu shipyard in Lappeenranta.