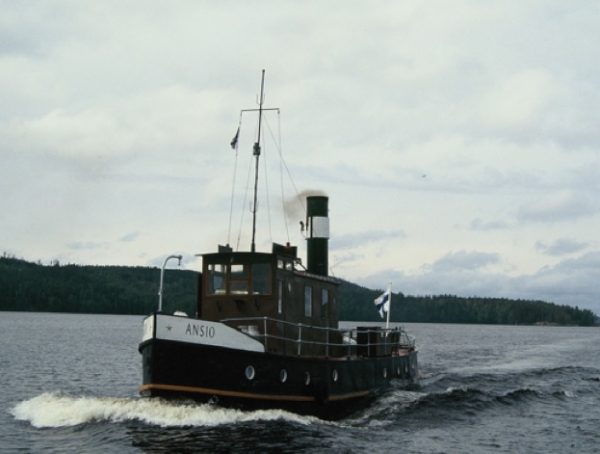 The ship was built at the Tampere Flax and Iron Industry Workshop (Tammerfors Linne- och Jernmanufaktur Ab) in 1889 by E. Feiring as a “salon ship” type passenger ship. The ship, registered for 55 passengers, was named Ruija and placed in Pyhäjärvi between Tampere, Länkipohja and Hämeenlinna. Its bow was open, followed by a low-covered saloon for passengers and crew. However, when completed, the vessel was almost immediately sold to Nils Idman, the bank manager, who moved it through the city of Tampere to Lake Näsijärvi, where it began to supply traffic from Tampere to Kuru, Teisko and Aitolahti under the name Carolus. Only two years later, the owner of the ship changed again, it was bought by Esaias Lehtinen.

Lehtinen, the owner of Kyöstilä’s Mäkelä house, and his partner’s machine operator Jussi Hilden and a third partner named Lähteenmäki continued on the same route, but also did fun rides at Carolus, where they also had a lot of space to bring extra space. Lehtinen and his partners equipped the ship for 13 years, until it passed into the ownership of Juho Mäntynen from Tampere in 1904. Three years later, the owner of the ship changed again. It was transferred to the Naurissalmi sawmill, which gave it the name “Salmi” and used it in its towing work on Lake Näsijärvi.

It was left to the towing work, the next owner, the Kotvio sawmill from Ruovesi, which acquired the ship in 1917, commissioned more thorough changes to the ship named Kotvio at the Dunderberg machine shop in Tampere, especially with a view to towing work. The vessel was extended by about 1.5 meters, its sides were raised and a cockpit, kitchen and a small salon were built on the nave. The workshop also manufactured a new boiler and machine for the ship. The company also had another tug, the larger Kotvio II, so the newcomer came to be called “Little Kotvi”. During the war years it probably stood idle on the shore of the sawmill and in 1944 it was sold to Reino and Tauno Saarinen in Kutajoki, Hollola.

The former navigator of Tampere’s waters is now plowing the waves of Päijänne. Changes were made again: with the clear sides of Päijänne clear, the stern and bow of the ship were raised to the level of the middle deck, a more powerful aircraft was obtained from the scrapped passenger ship Tiirismaa. In the wake of the passenger ship period, Ansio also had heating from the “bow side”. The islanders wanted the same man to take care of the machine and the heating, so they turned the boiler the other way around. With its new name Merio, the ship got to know the shores of Lake Päijänne before its actual work was completed. In the mid-1970s, Ansion was bought by a private owner who already owned a steamship named Tavin in Päijänne. He later bought Halla IX and Rito from Saimaa, as well as a share of the Actions. The intention was to rescue the ships, but there are quite a lot of five ships, even though one summer they were all in service. In the end, the owner only kept the Halla IX, new hosts were gradually found for the other ships.

Merit passed into new ownership in 1980, when it was turned into a pleasure boat on the Padasjoki River. Half a decade later, however, the ship remained stationary until a couple looking for a steamer found out about Ansio in Lahti and bought it in 1994. The new owners moved Ansion to Joutseno, where an 11-year refurbishment contract began, dismantling and repairing the damper was changed to the frame. In 2003, the ship was launched again and in August 2005 the boiler was lit for the first time after a break of more than 20 years. After that, a test drive was allowed, and Ansio’s new life in Saimaa had begun.