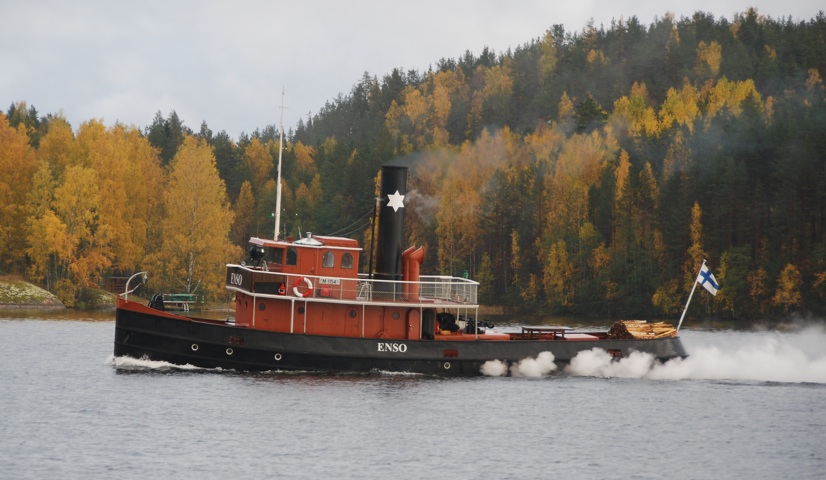 The vessel was originally ordered from Paul Wahl’s workshop by Enso Träsliperi Ab, whose Baron C.A. Standertskiöld founded Vuoksi on the banks of the Räikkölä rapids in 1889. The idea of ​​Standertskiöld was also the name of the company “Enso”, with which the agglomeration developed around it became known. The company’s first ship also got the same name. Its construction year is mentioned in various sources as either 1899 or 1900, which is probably due to the fact that its construction began in 1899 but it only started operating in the summer of 1900. Enso was originally a sparrow, to the log board, fastened his bow to it and, with his toe winch, pulled the stern of both himself and his cargo forward to his anchor.

The ship’s originally 76.6 IHV engine and boiler were located closer to the bow than it is today, and my chimney was on the bow side of the deck structures. The closed welded hatches of the old log boxes are still visible on the deck of the ship, on the bow side of the existing ones on both sides of the cabin. There were only deckhouses on the deck. There was no kitchen or salon, the crew had a wood stove in the bow cabin. There was no hostess in the strength of the crab-sparrows, and the company did not arrange for the ships to be catered for, but the crew was responsible for them themselves. Usually this was done by rowing an auxiliary boat to the farmhouses along the route. Fishing was also a common hobby on board, and brought its own addition to the diet.

After Enso Träsliper merged with Gutzeit in 1911, it moved to Enoch’s new shipping company. In 1924 it was made a line tug. Konetehdas Oy from Savonlinna, to which Enso Gutzeit had previously acquired a majority stake in the same year, delivered a new boiler and a larger Triple machine. The deck structures were also renovated, and e.g. kitchen on deck level and captain’s cabin on upper deck behind wheelhouse.

Enso’s season in commercial traffic ended when the company decided to switch to diesel tugs in 1965. The cessation of traffic was so abrupt that the tube repair that had already begun was interrupted on board. In 1969, it was sold to private ownership, which completed the tube renovation. Lindroos then drove Enso for a few summers, but due to the busy work, the runs were limited. The ship remained a “floating summer cottage” until a diesel engine was acquired in the late 1980s. However, Lindroos did not carry out the dieselization in the normal way, but realizing the museum value and uniqueness of the steam engine ended up leaving it and the boiler in place. A diesel engine was placed between them and the steam engine was “rotated” by a hydraulic transmission system. This put the ship back into service.

In the early 2000s, Veikko Lindroos’ friend and former student at the Helsinki University of Technology, S / s Antero’s shipowner Ari Juva, began discussing with Lindroos the restoration of Enso as a steamship. Lindroos got a feel for the activities of the Finnish Steam Yacht Association, for example, by participating in regattas on a diesel machine, and when the idea matured, Lindroos made a decision in the autumn of 2007. The goal was to ride Enso’s steam to the 2008 Hairdressing Regatta. After the project was planned, the refurbishment work began in the spring of 2008. The machine, which had been standing for almost forty years, required a lot of work, was on schedule, diesel was dismantled and