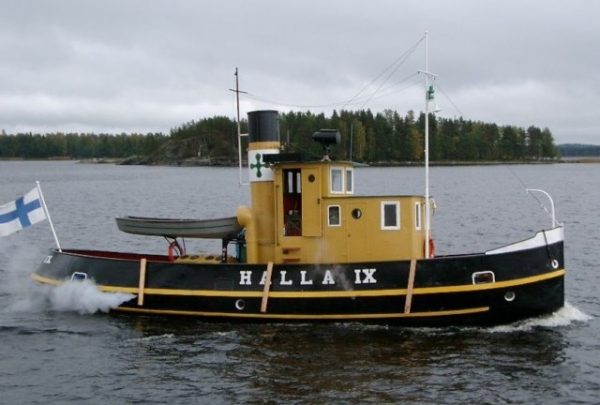 At the end of the 19th century, the Halla Aktiebolaget sawmill company in Kotka began to extend its wood procurement to the Saimaa region, for which it needed towing equipment for the area. The company ordered a small sparrow from the Stenberg workshop in Helsinki, which, when completed in the summer of 1896, was named Otava II after the sawmill established by the company in Otava. Otava II’s domain was initially practically the whole of Saimaa. The logs were purchased around the water to be transported to Mikkeli, from where they were further transported by rail to Otava. Due to the size of the area, the company also had to resort to horse-drawn logs for several years to transport its logs. The slowness of the support mowing caused the Company’s management to switch to bundle swimming as early as 1897, following the example of rival Gutzeit, and to acquire a bundler for Saimaa, which was named “Otava II”.

In 1903, the company bought a German sawmill in Mikkeli and also established a shipyard and base there, from where the trees were moved forward by rail. At least with the new sawmill, the need for wood did not decrease. From time to time, the Company’s larger tug, “Sirius” from Kotka, came to the rescue, and sometimes we had to rent towing assistance from Gutzeit, even though Otava II was busy. However, it was not in such a hurry that it would not have had time to rescue the stranded passenger ship “Sorea” in the summer of 1904. In any case, an increase in capacity became necessary. When new tugs were acquired, the company also decided on its new naming convention: henceforth most of its ships were named on the principle of “Halla Roman number”. Otava II was named “Hall IX” in this context.

Halla IX was converted into a tugboat in 1928, when it was thoroughly renovated in Kotka. Its operations continued in Saimaa until 1949, except in the war years 1942-44, when it was used by the army in Ääninen, and in the summer of 1945, when it was engaged in demining in the Gulf of Finland. In demining, it apparently served as a kind of auxiliary, as, for example, the information in the war archives does not tell us about its contribution to the actual demining work. In Saimaa, it worked e.g. On the Iisalmi route, where it moved ferry ferries to bundling sites. It also towed ready-made cable cars to the upper end of the Heinävesi route, from where the Savo Float Association transported them through canal sections to Vaaluniemi, from where Kymiyhtiö’s larger line tugs continued. In 1949, the ship remained stationary, but already in 1952 the company moved it to the Mäntyharju route, where it had a log overflow plant from Saimaa to Kymijoki. The chimney and mast were converted to fold due to the low bridges along the route, and it began its towing work with its small motor-powered auxiliary tug Kymi 50. Even after this, its future and possible dieselization were considered, but the ship continued to tow as the last steamship on the Mäntyharju route until 1961. It was then left to stand for a couple of years, reopened for the summer of -64, and transferred to Kuolimo to stand until it was sold to private ownership in 1968.

Lindberg had saved Halla IX from scrapping, but had not had time to use it, and when he moved to work abroad he wanted to sell the ship in good hands. The buyer was a person who already had a couple of steamships in Päijänne, but who wanted to get the ship from Saimaa after it had collapsed. After visiting the ship in Orraintaipale, the deals were completed, and the following spring, renovations began, which ended with the participation in the 1977 Savonlinna Regatta. began to win the field and Halla began to come in the middle years. After a major renovation in 2003, the responsibility for managing the ship has begun to pass to the next owner, and the ship will continue sailing in Saimaa from Savonlinna.