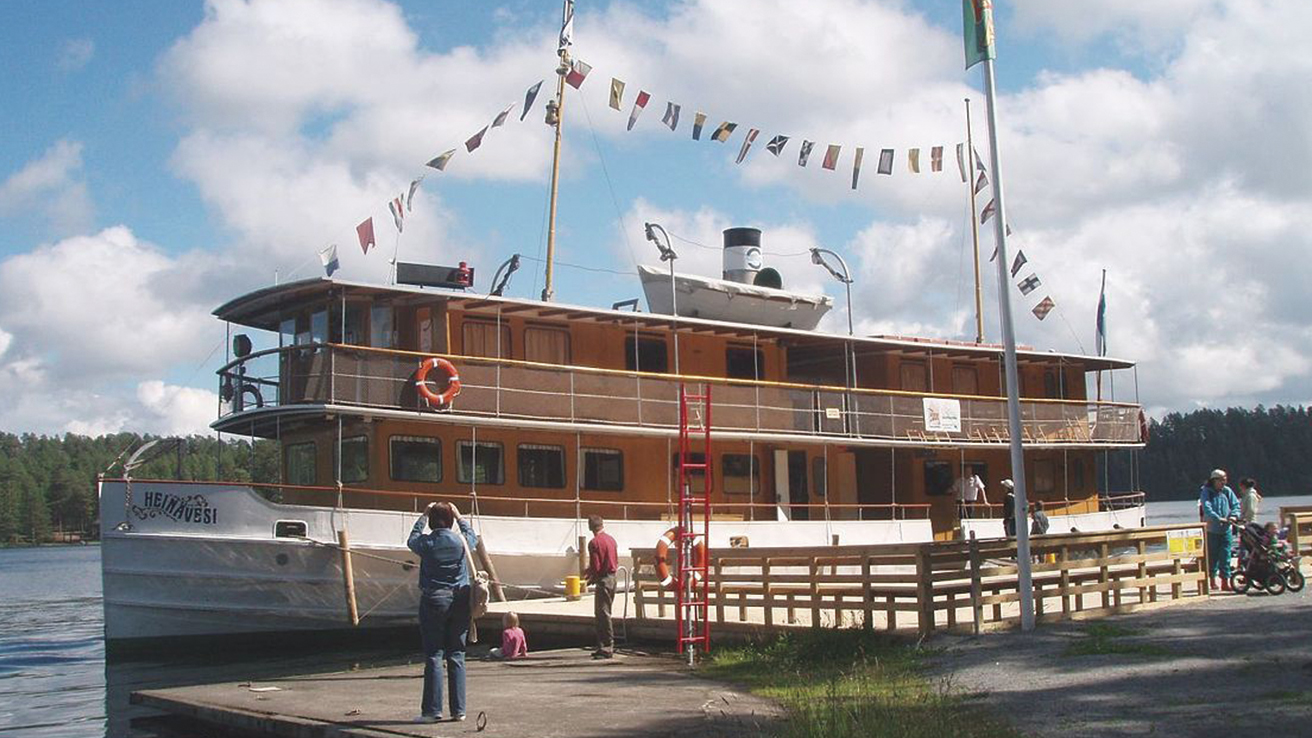 The completion of the Heinävesi canals and the opening of the route in 1906 generated local enthusiasm: steamboats had to be brought to the beautiful route. Even before the opening of the route, the Heinävesi Höyryvenhe Cooperative had been established in 1905. When the necessary amount of money could not be collected from the residents of Heinävesi, the collection area was expanded. The company’s shareholders consisted mainly of farmers, merchants and artisans from Heinävesi and the surrounding area, including slaves. The company’s first ship, Heinävesi I, was completed from Paul Wahl’s workshop in 1906. It was allowed to take 200 passengers, who were offered numerous cabins and several salons.

Heinävesi I left Kuopio at 1.30 pm, except on Sunday Sundays, when it was carrying church people. Hay water, where it stayed overnight in the vessel arrived at midnight. With the same exceptions, we left Savonlinna at 13.00 and Kerman beach at 03:00. The place to stay remained the same for ten years, until in 1916 it moved to Säynetkoski. The Heinävesi route was a beautiful route popular with tourists. The ship’s guest books contain a lot of greetings left by tourists. There were also a lot of foreigners among them, most from all over Europe, but also from more exotic countries. However, the ship in particular was important to the local population, for whom it was actually the only means of transport to cities where they went to sell their own products and buy those that were not themselves produced.

As soon as the first ship was completed, the Cooperative ordered another ship, Heinävesi II. In 1909, Heinävesi III was completed, which was clearly smaller than the previous ones. The cooperative was relatively well supported. Heinävesi I did the best, III the worst, but its role was to bring passengers from more remote piers to their bigger “sisters”. Most of the revenue came from passenger traffic, with freight accounting for about 15–20% of passenger revenue. On the expenditure side, salaries accounted for about 25–30, fuel halos for 11–12, and repairs for about 5 percent of annual expenses. 1916 The cooperative already bought its fourth ship, “Kallavesi”, which was named Heinävesi IV. Its area of ​​operation was Juojärvi.

The cooperative had produced quite well, but debt had also accumulated for the rapid acquisition of ships. A fatal setback occurred in November 1919, when Heinävesi II ran aground on ice and was leaked. The passengers were rescued on nearby Paimensaari, from where, after a couple of hours of waiting, Parsifal (link?), Which happened to pass by Ahlström, picked them up and took them to Kuopio. However, rescuing the ship was more difficult. Numerous ships participated in the project, among them e.g. Gust. Ranin Oy’s tug Vipunen (link?). The lengthy lawsuit and the expensive rescue operation were perhaps the main reason for the Cooperative’s bankruptcy in 1921. Its assets were transferred to the established Heinävesi Steamboat Limited Liability Company, which took over the cooperative’s debts. The operation of the ships was not much affected by this, they continued on their old routes. However, there were too many ships, and Heinävesi III was soon sold, following the sale of Heinävesi IV in 1928. The first Heinävesi continued its toil, and investments were made in it: Heinävesi I was thoroughly repaired in 1931 at the Savonlinna workshop.

In the 1950s, motoring and the construction of new roads began to show in the ship’s passenger numbers. The focus began to shift even more to tourist traffic. The Kuopio-Savonlinna distance was now driven in one day. In 1965, efforts were made to improve its economy by installing an oil burner instead of log heating. Heinäveden Höyrylaiva Oy ceased operations in 1967, when the “number one” passed into the ownership of Saimaan Laivamatkat Oy. Saimaan Laivamatkat Oy, owned by the municipalities of the Saimaa region, was founded in 1967, and it acquired less than a dozen traditional passenger steam tickets. At that time, “number one” fell out of the name of Heinävesi, and the ship only became “Heinävesi”, by which name it is still known. However, the Saimaa Ship Trips also went bankrupt in 1981. A few people from Savonlinna, who were worried about the ship’s fate, bought the ship at auction, setting up a new company, Savonlinnan Laivat. The ship’s route now became Savonlinna-Punkaharju-Savonlinna. Outside of scheduled traffic schedules, it was also used for charter cruises. For the last few years, the ship has been at the Laitaatsilla shipyard.