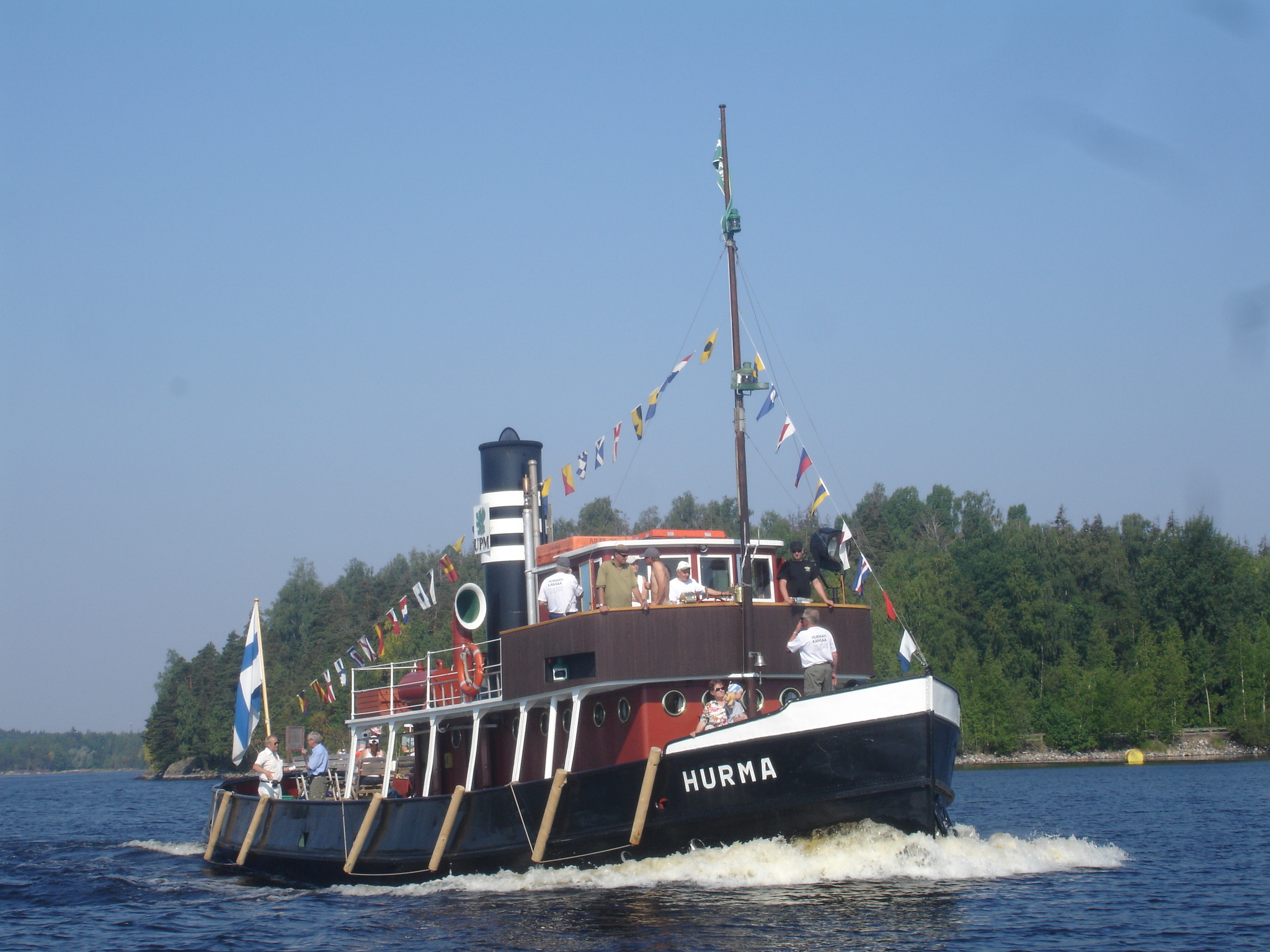 The charm was built in 1902 at the Vyborg shipyard in Vyborg. The vessel was built as a tug for the use of T. & J. Salvesen limited company. Original drawings or photographs from that time are not known to have survived, but it is known from the descriptions that there was only a small wheelhouse on the ship. Anyway, relatively little is known about the early years of the ship. In the winter of 1909, the ship was replaced with a more efficient machine and boiler at the Vyborg workshop. Some news about the ship can be found in newspapers, mostly about the shipping lanes it opened in the spring.

In 1916, Oy Kaukas Ab acquired Salvesen’s business and through that S / S Hurma, together with the company’s fleet, became the property of Kaukas. However, the company continued to operate under its old name, and Salvesen’s “S” logo remained in Hurman’s chimney for the time being. Since there were already enough tugs in the Far East, it tried to sell Hurman, but in the end it just ended up renting it for one summer to the Fuel Committee of the Russian Ministry of Trade and Industry, which was to procure firewood from Finland to St. Petersburg. Since 1919, the ship’s passages are quite well known. The strong tug was the first or last ship to sail in Lappeenranta waters for several years. 1923 Hurma moved under the banner of Kaukas after he merged the Salvesen and Cederberg fleets he owned into his own transport department. 1924 Three white stripes appeared on Hurman’s chimney to symbolize the three companies and a logo representing the Kaukas spool of thread on them. Hurma’s task was usually to tow cableways from Joensuu or Tika via Savonlinna to Lauritsala.

In the winter of 1935, extensive renovation work was carried out in Hurmaa at the company’s own shipyard. The company did not have an icebreaker, so it was decided to make Hurma one. Its bow was shaped to be more suitable for icebreaking, the side plates were replaced with thicker ones, and the arches were renewed. They were placed denser than usual and at the same time the ship was widened by almost a meter. The ship’s top speed dropped slightly – it had previously been 12 knots – but it became an excellent icebreaker, said to have broken up to 40-50 cm thick ice. In connection with the hull changes, new, larger deck structures were also built on board. After the changes, the ship, which has been used a lot since then, became the company’s most used ship after the sailing season was extended. During the war, it was used almost all year round by the Defense Forces, although the Kaukas company was not very happy about the damage to the ship’s thick ice.

After the wars, Hurma continued her daily toil, mostly towing barge ferries, sometimes barges and sled ferries, until the late 1950s. At that time, use began to decline, and in 1959 the Charm was put to a complete stand, as well as for a couple of years in the early 1960s. The crew of 9 people and the hostess, together with the rather high fuel consumption, ate up the profitability, which was tried to be improved by converting the ship to oil-fired in 1965, after which the salaries of the heaters were saved. In 1969, the vessel was transferred to the ownership of Tehdaspuu Oy due to corporate reorganizations. Its chimney was replaced by the letter “T” in Kaukas ’“ spool of yarn, ”while the three white collars survived. In the 70s, however, towing steadily declined. Occasionally, however, different pleasure runs were run. In the summer of 1974, Hurman was last in towing. Since then, it has run representation and pleasure trips, mostly guest groups of Tehdaspuu (later UPM Metsä OY) and even its own people – the ship is still on the merchant ship register. In the spring of 1996, the Hurman chimney sign changed for the third time, the T sign was replaced by UPM’s eagle eagle. The following year, it was turned back into a wood-fired – “cultural act of the year,” as the company’s Metsä magazine headlined the case. The charm moves from Lappeenranta in the direction of both the sea and the upper waters of Lake Saimaa.