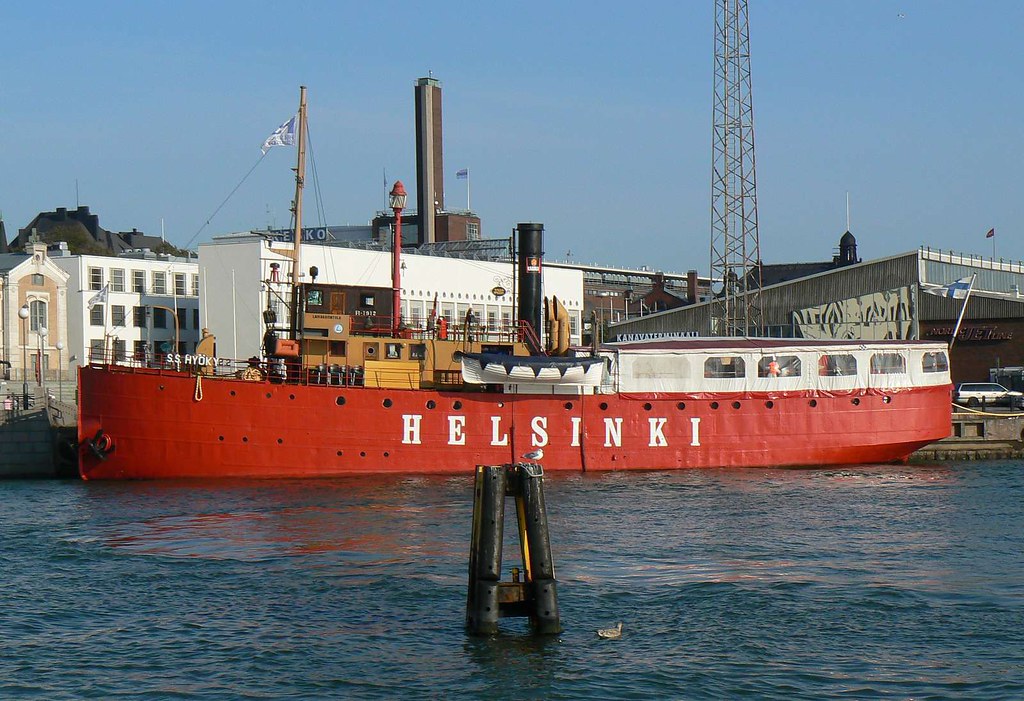 The ship was completed at the Putilov shipyard in St. Petersburg in 1912. Its original location was Liepaja, Latvia, and the Russian name was “ЛИБАУСКЫ” (Libauskij). The ship had an electric flasher and a wireless telegraph, meaning it was a modern lighthouse ship according to the requirements of the time. In the spring of 1918, the Jaegers hijacked the lighthouse ship, which was ready to leave, and brought it to Finland, where it was initially used as an aid to military transports. At the end of the hostilities, the ship was not required to be returned, so it remained in Finland. It was placed on the site of a lighthouse ship sunk in the heat of the Civil War in front of Rauma and was named Relandersgrund according to its location. A few years later, in 1921, it changed its position “head on” with the Äransgrund lighthouse in front of Helsinki (see Kemi), when the names of both also changed to correspond to new positions.

The Äransgrund electric light was replaced in 1924 with acetylene light to save carbon, an electric light that had required continuous rotation of the turbine. The ship never had a lighthouse tower that climbed from the inside, but the lighthouse was a lantern placed on a platform half a meter in diameter on the bow mast. Igniting and maintaining this was a rather demanding and dangerous endeavor, especially in rough seas, but the light had to be turned on every night and turned off every morning. In addition, the lantern had to be covered with a hood for a day so that the lantern prisms would not have acted as a kind of burnt glass. Other regular activities included once a week maintenance of the solenoid valves controlling the flashing device and washing of the lantern glasses, as the base was carbon-heated.

By 1933, the ship was given a new name, “Helsinki”. However, its location remained the same. However, it was not in place during the wars, and as the war dragged on, it was painted gray (white in winter) during the Continuation War, armed with anti-aircraft guns, and transferred to the mother ship of deminers. It suffered war damage on two occasions, but was repaired and after the war the ship returned to its normal work off Helsinki.

In 1959, Helsinki’s new bottom lighthouse was completed and the lighthouse ship remained unoccupied until it was decided to make it a support vessel for surveyors. After two years of modifications, the vessel became the support vessel of the 5th Marine Surveillance Expedition measuring the Gulf of Bothnia under the new name Hyöky. The interior was renovated and the ship was equipped with a new bridge. The hull of the ship was painted white, like other sea-going support vessels. The ship proved to be an excellent support vessel: measuring and auxiliary boats could be lifted to deck in safe weather, and the ship itself had a sturdy anchor engine with mushroom anchors, which was the basis of the lighthouse ship era, which was very useful in the severe weather conditions in the Gulf of Bothnia. The vessel remained coal-fired for most of its service life. In 1980, peat briquettes were tested there, but the experiment ended due to the combustion properties of the short material unsuitable for a coal boiler.

In 1983, the Finnish Maritime Administration commissioned a new five-boat rapid sounding team to carry out the work of the 5th Marine Surveillance Expedition, and Hyöky became unemployed. The vessel was sold to a private individual in Hamina and turned into a restaurant ship. Initially, it had a white-sided appearance during the surveying period, but at the turn of the millennium it was painted red like the lighthouse, and the name Helsinki again appeared in large white letters on its sides. Instead of the original lighthouse lantern placed on the mast, a lightly adapted lighthouse mast appeared on the roof of the deck structure, which, however, is considerably smaller than in other lighthouse vessels. The new covered bridge built for the use of surveyors is another exception to the look of the lighthouse era. The ship’s original steam boilers and engine are in place, but have not been inspected or operated since 1983. However, the restaurant ship has been moved from place to place by tow.