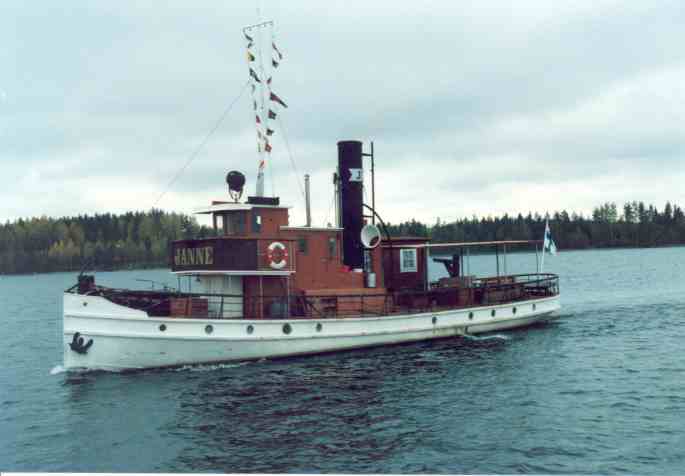 After the passenger ships “Axel” and “Ilma” sailed on the Iisalmi – Kuopio route, a vacuum was created, which Nerkoon Höyryvenhe Oy was established by merchants Koponen and Väisänen to fill. The purpose was to operate passenger traffic from Iisalmi to Nerkoo, for which purpose a small commuter steam “Mesak” was acquired. However, this was soon replaced by a newer vessel bought from Puruvesi, apparently built in 1907 in Savonlinna, apparently called “Puruvesi”, which was named Nerkoo. It was allowed to take almost 100 passengers, which was considered sufficient on the Nerkoo – Iisalmi route.

The ship’s journey to Nerkoona was short of this, as it was sold in 1912 to M. Koistinen, a merchant from Nurmes. The ship was named “Coast” and was placed on the route Nurmes – Kuokkanen – Virsunranta – Vuokko. The vessel apparently focused a little more on freight traffic than before, as it was now reported to take about 70 passengers. It carried even more freight: farm products, butter, fish, milk, etc. in one direction, and more special “shop goods” sold in the store in the other. Merchant Koistinen was also known as a skilled engineer who took care of many machine repairs himself, avoiding many trips to the workshop. This was one reason why several of his ships did quite well.

Koistinen had several ships, but for some reason he sold the “Coast” back to the waters of Iisalmi after a couple of summers. The buyer was the Nerkoo sawmill, which renamed the vessel Nerkoo. Converted into a tug, Nerkoo transferred to Enso-Gutzeit’s large tug fleet in 1916, receiving the name “Janne” in 1932 according to the company’s naming convention, according to Janne Holmström.

The Paris Peace Agreement obliged Finland to clear the Gulf of Finland of mines. Due to the shortage of equipment, Saimaa tugs were also connected to the clearing department established in 1945. Janne was one of these, serving as the flagship of his own squadron. The crew on board consisted of a squadron commander, a ship’s captain, a chief engineer, a clearing officer, and ten conscripts, i.e., six deckmen, two heaters, a radio operator, and a chef. Janne’s base was initially in Kluusholm, on the neighboring island of Pelling. From there we moved to Kirkonmaa. When the clearing area reached the Estonian coast, long days were taken, the departure was in the morning and in the evening we returned to the base. The weekends were spent at the base. The ships were painted with the emblem of the clearing group on the chimney, a white vertical line on the hull as the emblem of the clearers, and a clearing cloth with the letter F fluttered in the boot. On the stern deck of the ship was a clearing winch with a kite towed on the surface at the end of the wire. Beneath the surface were depth stabilizers that adjusted the clearing depth, as well as detonation grips that blew the mine anchor wire across, causing the mine to rise to the surface to be eliminated. Buoy grabs were another way to find mines. That too was towed behind the ship and it reported that a mine had been found with the help of a buoy. An explosive gripper was then used to bring the mine to the surface. The clearing was stopped in 1948, when the rest of Saimaa’s civilian tugs were returned to their daily toil.

After demining, Janne returned to Gutzeit’s work. In 1966 it was sold for private use, the new owner then recalled the shops as follows: “I became interested in steamships as a young student boy … I studied in Germany before the wars and traveled home and back on the steamship several times. On every ship I was a regular guest in the engine room and a good guy from the engineer – the technology of the steam engine was very interesting. Later, since 1959, we sailed several times in Kaima Päijänne. ” He says he once drove past Laitaatsilla, saw several steam tugs at the pier and went to ask if any of them were for sale. Janne was recommended to her because it had only been renovated for FIM 20,000 a year earlier and a new transformer had been installed.

The new owner became the first person to buy a steamer from Gutzeit for pleasure use. The following year, he also attended the founding meeting of the Finnish Steam Sailing Association as one of the founding members. Janne continues his journey in Saimaa, his home port being Savonlinna.