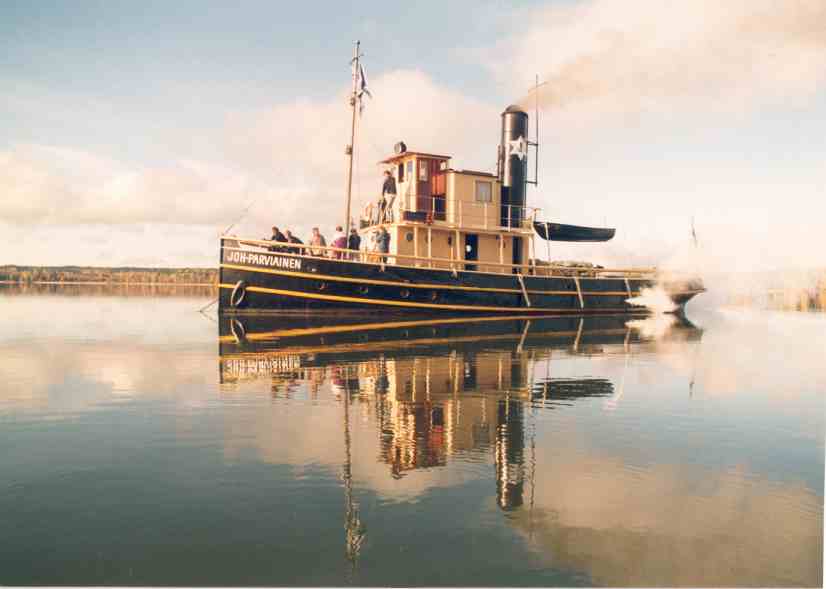 Joh-Parviainen’s birth stages were exceptionally complicated. The ship was ordered by Joh-Parviainen limited company, which was in dire need of new towing equipment for Päijänne. At that time, its transport was mainly handled by the old and low-power impeller steam Sampo. As early as 1903, the company’s procurator, Hugo Parviainen, commissioned engineer Konstantin Jansson to design a new tugboat. Usually at that time it was customary to inform the workshop of the size and power of the vessel. However, Parviainen decided otherwise, he sent the drawings and requirements he had commissioned to as many as seven different machine shops. However, his demands, which included an efficient triple machine, were quite strict, which, together with the boom in the engineering industry, which in any case had plenty of orders in the workshops, made it difficult to reach an agreement with any supplier. Sometimes the order conditions changed and a smaller tug was planned, sometimes the whole project was buried for a couple of years. Eventually, however, Parviainen reached an agreement with Porvoo Konepaja on the construction of a tug – which became Päijänne’s “royal tug” for decades before the completion of the “Swede” (300 hp) in 1937.

Joh-Parviainen was built in Porvoo and finally assembled and equipped in Lahti in May 1908 and began working for the Säynätsalo factories. It was single-deck, like most tugs of the time, with only a pantry and cockpit on the main deck. Joh-Parviainen towed logs to the Parviainen plant in Päijänne and hauled finished products to the ports of Lahti and Jyväskylä with iron shampoos and wooden-built Salo barges to be loaded onto train wagons. Especially in its early years, it also served as a shipwreck between Jyväskylä and Säynätsalo. As the strongest tug icebreaker in Päijänne, it usually emerged as the winner in the spring race, where the first ship to arrive in Jyväskylä received a free berth for the summer. With the acquisition of Enso Gutzeit in 1947, Joh. However, the ship’s operations were not significantly affected by the change.

At the turn of the 1920s, the look and decor of the ship was improved. It was made with a bridge deck on which was placed the cockpit and a salon suitable for representation purposes. Navigation reliability was improved with a handsome compass and floodlight. Later, a card tunnel was added to improve towing efficiency. The ship got its current appearance in the 1951 repairs. At the same time, the ship received a newer boiler and a steam winch, as it was only so late that it was decided to switch to wire towing. The boiler was obtained from Saimaa from a diesel-powered “Voitto” tug. Variation to everyday toil was brought about by the company’s hosts ’representations sailing with their guests and autumn yacht trips. Among the well-known citizens who were on board were academics Alwar Aalto and Wäinö Aaltonen.

After the end of professional use in 1965, the scraper’s welding equipment had already been lifted to the ship’s deck, when the new owner got into trouble and bought the ship from the scrap dealer Tauno Häkkinen in 1970. Parviainen was oil-heated at the time, but was later converted back to log-heated. The ship was sailed enthusiastically, and in the 70s its specialty became long sailing seasons, as it was often driven on ice even in winter.