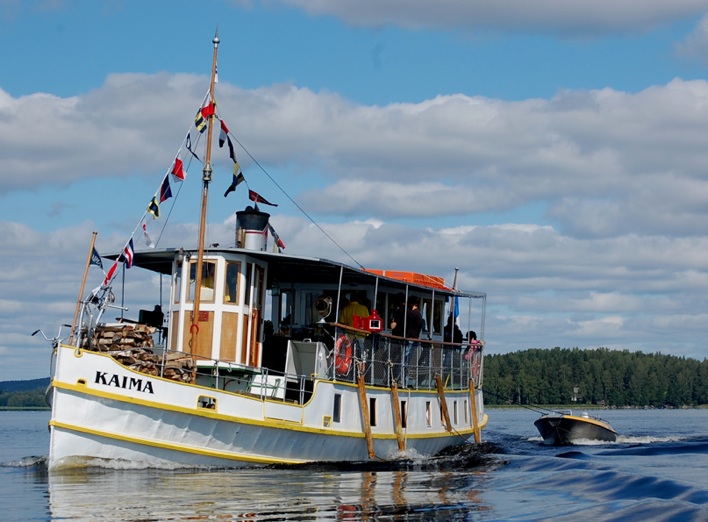 Kaima was ordered on April 20, 1898 from the Varkaus workshop to the newly established Jyväskylä-Päijänne Shipping Company, which was later called the “Kaima Company” more simply. The vessel, which cost FIM 32,300, was transported from Varkaus to Lahti, where it was assembled and launched in September of the same year. Later, Kaima expanded, acquiring two new Kaima vessels and eventually acquiring all the major Päijänne liners, which eventually gave it a de facto monopoly position in Päijänne’s passenger traffic.

Kaima operates from Jyväskylä to Korospohja on weekdays, in addition to which church trips were made to Korpilahti on Sundays. These church trips later became a tradition, and Kaima did them for more than 40 years. Kaima was known as a fast ship, with full steam it cooled the back of Päijänne at a speed of up to 11 knots. In addition to her route and church trips, Kaima occasionally drove pleasure trips that could extend as far as Lahti and Heinola. Often on these voyages a pleasure barge was also towed, on which opposed benches for passengers on deck and hold were built. The song is said to have echoed on these trips along the back of Päijänne. In 1902 Kaima received the rights to mail ships. The most visible sign of this was a mailbox attached to the wall of the deck cabin, to which consignments were marked with the ship’s own stamp.

Kaima has mainly sailed in fairly happy characters, although in the early days it was criticized in the newspapers for unnecessarily rape landing on piers. Kaima’s rather shallow hull also caused problems in exceptionally bad weather: on its first autumn, when transporting a wedding party to Kurpilahti’s Kurkela, it was hit by a storm that lifted the waves to the deck of the ship and threatened to break its cabin doors and windows. The ship had to apply for windbreak until the next morning. Kaima was witnessing an even uglier case when she was an innocent party in the accident while competing with Jämsälaiva for speed. Jämsä’s boiler exploded and two of its sailors died. The competition, which began with a playful spirit, often heated up the emotions, and both the crew and the passengers were waiting to win. At that time, engineers could be tempted to push wedges between the safety valves for extra pressure and speed, albeit with seldom such sad consequences. A brighter statistic in Kaima was represented by a woman giving birth to a healthy baby boy on board.

Jyväskylä-Päijänne Shipping Company ceased operations in 1950 and its ships were sold. The namesake was bought by Heinolan Laiva Oy, which used it as a tug. For the next eight years, it towed log barges to Lahti and Heinola. Then its professional runs ended and it was sold as a floating cottage to Olavi Ruudu from Helsinki, who, in his own words, bought it “pity” for the then 2,000 marks. He then refurbished the ship into a mobile yacht. The Kaima was the first larger commercial steamer to be sold for private pleasure use. Ruutu was later also a founding member of the Finnish Steam Yacht Association and its first commodore. With his families, relatives and guests, he had time to pass all the wings of Päijänne in Kaima, but later, when the shipowner reached the age and Jarmo Ruudu, who worked as a mechanical engineer, moved to Varkaus, where Otso acquired his own ship. In 1988, it was bought by Timo Fredriksson from Jyväskylä, whose grandfather, bank manager Anton Fredriksson, had once acquired Kaimaa from Varkaus. The ship was lifted ashore on Varassaari in Vaajakoski, its decayed deck structures were dismantled and the machines were taken to the warehouse dismantled.

The new arrival of the name began in 1998 after the new owners bought it. The vessel was refurbished but was soon put up for sale due to low usage. New shipowners were found in 2007. Kaima initially considered Vääksy as its home port, but in 2013 it was transferred to Saimaa. Today, its home port is in Anttola.