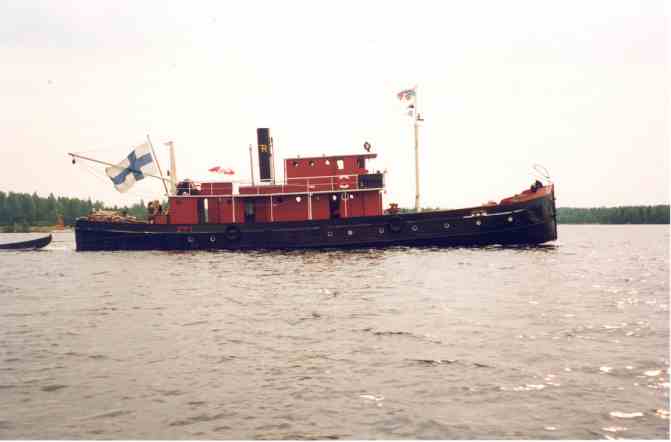 At the time, Herman Saastamoinen, a commercial adviser, was a real figure in Kuopio’s economic life: he engaged in extensive wholesale trade and was also the city’s largest industrial employer. Both operations required transport capacity, and Saastamoinen had a considerable fleet: at its largest in the mid-1920s, it consisted of eight tugs, nine cargo vessels and almost thirty barges in Saimaa alone. With the First World War, St. Petersburg’s coal supply became more difficult, resulting in a high demand for firewood. To meet this demand mainly, Saastamoinen commissioned a cargo ship in 1916 at its own Haapaniemi shipyard, which was renamed “Savo”. It made its first voyage to St. Petersburg in the same summer, but after the Russian Revolution the ship mostly stayed on Lake Saimaa. The round-bottomed vessel was able to experience considerable seagoingness at sea, especially when it was smaller than the usual “full-load” cargo vessel dimensioned according to the Saimaa canal. The ship had been deliberately made to float in the shallows so that it could accommodate cargo from the smaller canals of northern Saimaa.

Savo, painted white in a manner typical of Saastamoinen’s ships, was quite a graceful cargo ship. Its original machine and boiler were probably obtained from tar steam from Uuno, which Saastamoinen had bought in 1913, but which was wrecked in 1915. The current machine and boiler were installed on the ship in 1937. In addition to logs and other timber, Savo also transported Saastamoinen’s goods. They were brought back from Vyborg, but mostly they were transported from Saastamoinen’s Kuopio warehouses to traders all over the water. In these works, it continued in Saastamoinen’s service until the turn of the 1950s, when it remained standing due to the lack of cargo. In 1954, it was sold to Emil Kauhanen, a sailor from Leppävirta, who began to transport cargo within Saimaa – the canal was closed after the war. In July 1956, however, Savo drove to the rock and sank. It was lifted with Enso Gutzeit’s equipment and repaired at the Savonlinna workshop. However, the lifting and repair were too expensive for Kauhanen, who went bankrupt. In the ensuing compulsory auction, Enso Gutzeit bought the vessel for FIM 650,000.

In addition to water bundling, car bundling using drop docks had already been developed in the 1940s to make the bundles required for the use of bundle rafts, but the continuation of burrows and the lack of suitable drop-off sites also meant the continuation of water bundling. In addition, as the number of floats increased, Gutzeit’s fleet department also decided to increase the number of its bundlers, and in the late 1950s four ships were converted into press-type bundlers at the company’s Laitaatsilla shipyard. Savo was renamed Press IV and underwent major changes in 1958: its stern (against which the bundles were made) became straight, its machine and boiler were moved to the bow from the bundling mechanism, and cabins were made in the bow holds for the large number of crew required by the bundler. The deck structures also increased and moved towards the bow. The bundling itself was quite a daily ordeal: the ship moved from one bundling place to another, bundled there as long as there were enough trees and changed places. About 5,000 bundles were produced in the summer. The workforce was 14 men and a hostess.

In the water, bundling began to become expensive in the 1960s, so Pressurist IV’s career as a bundler was rather short. It was decommissioned in 1965 and remained standing until the new owners bought it for FIM 11,000 for private use in 1967. The ship was replaced by “Kalle Tihveräinen” instead of “barren” Presser IV, referring to a forest student mythical character who registered for all exams but never showed up. In accordance with Lehto’s then domicile, Mekki, the “port city” of Lieksa, became its domicile. In practice, however, the ship is usually seen in Savonlinna. Tihveräinen has survived in its bundle-era outfit, although the bundling machines have been removed. There has been enough continuity in the shipowner’s ship, although after Pentti Roito’s death in the autumn of 1988, the Pentti Roiton Foundation became the owner – at Roito’s request. For almost 45 years, the ship has had time to dig most of Saimaa’s routes for recreational use.