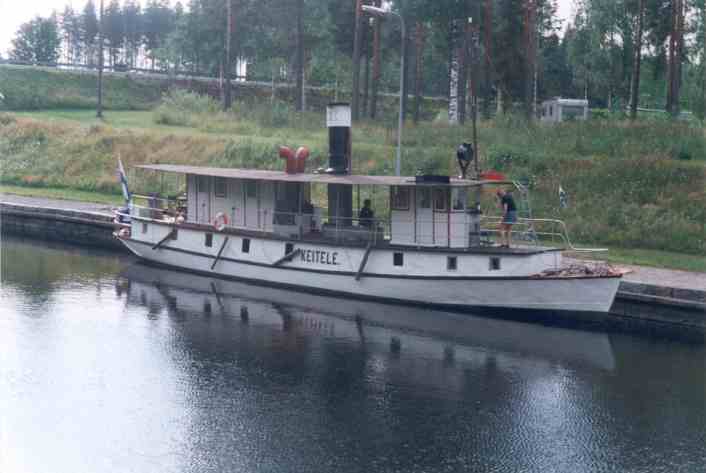 Steamship traffic began on Lake Keitele quite late, only in 1878. There was no major industry, and the commencement of ship traffic only became topical when the large sawmills in Kotka extended their floating operations to Keitele. Even then, each company took care of its own swim over Keitele with horse rattles. It was easy for the float manager William Ruuthin to convince the companies of the need for the ships and to agree with them that Ruth and Kalle Piilonen from Äänekoskel would take care of them. The contract was made in 1877, and according to that, Ruth brought to Keitele a sparrow named “Eno”, while Piilonen made a sparrow from Wahl’s workshop, which he named Keitele. Both began their services in 1878, with the latter also handling passenger traffic from the beginning. On the weekends, it drove from Äänekoski via Sumiainen to Viitasaari and back. From 1883, it began to make a weekend shift not only on Thursdays but also on Thursdays. Piilonen was not only a wealthy farmer, but also a sawmill owner who had established a steam sawmill in Äänekoski in the early 1880s, for which Keitele also towed logs.

For the first 8 years – according to the agreement – the ships sailed on the lake in two. Upon expiration of the contract, the owners of the logs acquired their own vessel and no longer renewed their contract with Ruuth. “Keitele”, on the other hand, continued until 1899, when Piilonen sold it to Äänekoski. In addition to Keitele, the store included a barge, four cargo warehouses and six berths with shores. At that time, the passenger shipping company had to build the piers it needed. Despite the change of ownership, Keitele continued its passenger ship services for another ten years, even though two actual passenger ships were on the route. It was not until the appearance of the large passenger ship Ylä-Keitele on the route in 1907 that Keitele settled for mere toe. In 1910 Keitele got a new machine and boiler.

The early history of Keitele accommodates a variety of minor wrecks, such as barge sinking and grounding, which, however, were fairly common to other tugs as well. In 1912, things were going to get worse: in a severe storm and poor visibility, the ship ran aground at full speed and sank. However, personal injury was avoided and the ship was lifted as soon as the storm subsided. Boil your tows mainly to logs and logs to Äänekoski. The Uittoyhdistys handled most of the towing of logs at the Äänekoski mills, although Keitele also participated in them from time to time. The Äänekoski mills became the property of the Värtsilä Group in 1941. In 1946, the old and dilapidated vessel had to be renovated, and at the same time it was decided to change its name. The company already had three other tugs named “Äänekoski”, and Keitele was now merged into the same series as “Äänekoski I”. In 1953, Metsäliitto Selluloosa Oy became the owner.

The ship’s days in commercial traffic ended in the summer of 1965, after which it was sold for private use in 1967. The first owner named it “Tiira” and converted it to oil-fired. When buying the ship in the 1970s, the new owner restored it to log-heated. The ship was otherwise restored as much as possible to its former state and regained its original name Keitele. For a while, however, it was called Keitele I, because the lake already had a pilot ship called Keitele. Keitele is still running as a steamship on its title lake, one of the oldest steamships in Finland.