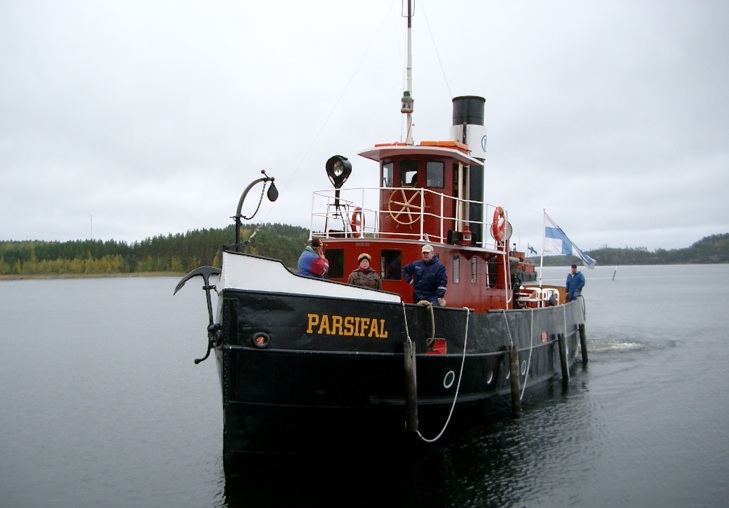 Parsifal was built in 1915 by A. Ahlström Osakeyhtiö as part of its rather large Saimaa fleet. The company’s policy of naming ships was quite varied, Parsifalkin probably got its name from Wagner’s opera based on the medieval epic of the same name. Parsifal was one of those Ahlström tugs called “two-fifths” referring to the ship’s power as old horsepower. Other twofolds included “Taipale” and “Carmen”.

Toivo Sepponen, who became a warmer in Parsifal in 1940, recalls that there were 6 men and a hostess on board. The vessel mainly towed from Kallavesi to Varkaus. “Loads were sought from Suovu and Kallinsalo, and some loads were taken from Joensuu or better from Pesola. Cable cars alone, that’s when there was a tugboat. All kinds of timber, sometimes even mixed loads… At that time, those loads are from the kolome and a half hundred bundles. There was no tunnel on the ship then, and when the tunnels came, the whole face of the loads almost doubled. ” Kallavesi was a collective diving area managed by the Savo Swimming Association, but Ahltröm had an exceptional permit to handle its own towing in the area with its own ships. Parsifalkin towed its bundle ferry until Varkaus, although the Konnus canal that was difficult at the time made towing difficult.

After the war, Parsifal was taken with more than twenty other Saimaa tugs for demining in the Gulf of Finland, which was required of Finland by the Paris Peace Treaty. Parsifal belonged to the sixth clearing fleet together with e.g. With Ahlström’s Taipale and Gutzeit’s “Juho” and “Uuno”. The Sixth Squadron operated in Estonian waters and used coal as fuel. Demining was completed in 1948, when even the last ships were returned to their owners.

1964 Parsifal’s bottom dampers were almost completely renewed below the waterline at Ahlström’s own shipyard, but a few years later 1968 Parsifal’s towing ceased and it remained standing for almost ten years. The ship was then owned by a Judge named Jalkanen from Joroinen. The new owner, who became the owner of the ship in 1978, put the ship back in service in white hull and light cabin.

In 2004, Parsifal got new owners and the following winter the ship was rebuilt in Kelloniemi, Kuopio, after which it was sandblasted and painted at Anttola shipyard. In connection with the painting, the ship regained its original coloring. Parsifal is steaming in Saimaa from Kuopio.