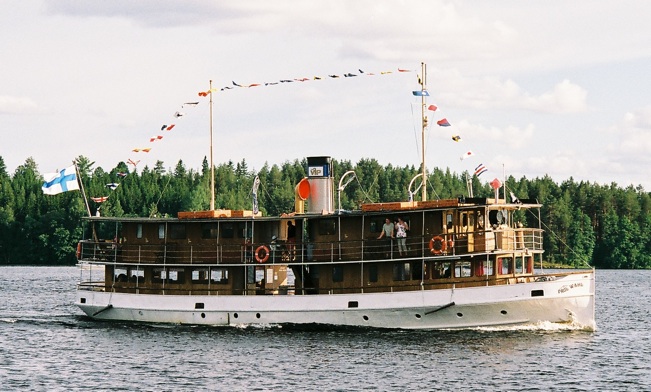 In 1919, Maaningan-Pielavesi Steamship Company ordered its largest ship from Varlaus’ Ahlström workshop, which was named Maaninka. The magazine “Savo” wrote about the case on June 21, 1919: “Yesterday, the new ship“ Maaninka ”of the Maaninga-Pielavesi steamship company started its regular services. The ship, which transmits traffic on the Kuopio – Tuovilanlahti route, was built at the Varkaus workshop. With a length of 87 and a width of 20 feet, the hull is an American river submarine model. It is built low and otherwise so that the stability of the ship through it has become quite high. At the same time, when building the hull, attention has also been paid to the ship’s speed, which has reached 20.7 km per hour. Under normal circumstances, the ship travels to a depth of 6 feet. ” The magazine also writes extensively about the ship’s cabins and facilities.

The Maaninka was a typical three-story passenger ship, where the layers also showed the social status of the tourists. The hull had the cheapest passenger seats and the third-class men’s smoking salon “Roihala”, the second floor with class II facilities and the top floor with the finest salons. A similar division prevailed in other similar passenger ships. The ship primarily served the needs of everyday traffic, but it was also used for pleasure trips: from Kuopio we went to see the Korkeakoski in Tuovilanlahti in the flow of the water, and for the night we came to the ship where the cabins had been ordered. They also ate and drank on the ship. However, as on other ships, the locals who traveled on everyday things usually did not use the restaurant, but ate their own snacks.

After serving the company for 20 years, Maaninka was sold in 1939 to Vehmersalmen Höyryvenhe Oy, which named the ship “Vehmersalmi”. For several years, the ship had caused a loss to Maaningan-Pielaveden Höyrylaiva Oy, as it had to reach the bottom nail on its 60km route in competition with car traffic. Before that, however, it had been successful, with the company closing down and selling its assets to as much as FIM 600,000, a large sum at the time.

Vehmersalmen Laiva Oy was no new company. It was founded in 1918, when the company bought a ship called “Kerma” from Suvasvesi, which became the first “Vehmersalmi”. Old Vehmersalmi served the company for twenty years on the Kuopio – Mustinlahti route until it was scrapped. Thus, “Maaninka” was acquired for the farm, which continued on the route of its predecessor. Vehmersalmi passed every day, spent the night in Mustinlahti and twice a week in Riistakoski. The time of the Second World War and the years that followed were a time of rise for passenger ship traffic, in addition to which the road connections in Vehmersalmi were quite poor. The Vehmersalmi company did reasonably well, although the ship’s major repairs, carried out in 1949, in which the upper deck, cabins and electrical system were renewed, became expensive. The downturn began in the 1950s, and in 1954 traffic was found to be unprofitable. The vessel was sold, although the buyer was not found until 1956, when the vessel was sold to Eero Torniainen and Lasse Hyyryläinen from Puumala.

1959 Torniainen became a partner and sold the vessel to Suur-Saimaan Laivat Oy, founded by the City of Mikkeli and Mikkeli Tourism, which gave it a new name “Mikkeli”. The ship was placed between Mikkeli and Lappeenranta. The owner changed again in 1967, when Saimaan Laivamatkat Oy, founded by the municipalities of the Saimaa region, acquired old passenger ships. In the fleet of this company, the ship was renamed “Joensuu” and in 1976 “Paasivesi”. After Saimaa Laivamatka went bankrupt in 1982, the city of Varkaus became the owner, naming the ship “Paul Wahl” after a name contest organized for the public, according to a landmark in its industrial history.

Paul Wahl, who is owned by the city in Varkaus but first leased to Varkauden Laiva Oy (1982-85) and then to Taipale Shipping Company for hosting, usually made local and charter cruises and “opera cruises” during the Savonlinna Opera Festival. In honor of its 70th anniversary, it made a trip to its first hometown of Maaninga. Even in Vyborg, the ship visited the 700th anniversary of Vyborg Castle in 1993.

In 2005, Kari Leinonen from Savonlinna bought the ship from the city of Varkaus for 70,000 euros for his company Vip Cruises Ltd., which already owned S / S Punkaharju. With the acquisition of Paul Wahl, the company gained additional capacity, and Figaro’s move to Helsinki at the same time had left a “ship-going” opening in the Savonlinna passenger steam fleet. However, the name was not changed, in honor of Varkaus and its shipbuilding traditions. Paul Wahl is still in cruise traffic in Savonlinna.