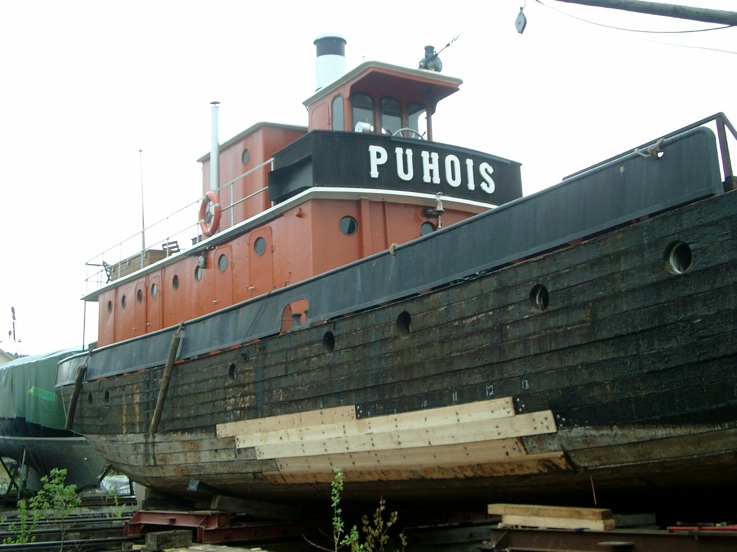 In the summer of 1925, the company’s first mechanical bundler “Sampo” was completed for the Tornator company in Tainionkoski. The wooden 19.4 meter frame was manufactured at the company’s own lotja sculpture in Tainionkoski, the machine and boiler were ordered from Konetehdas Oy in Lyonyniemi, Savonlinna. Sampo was the first press-type bundler, as opposed to older overburden bundlers. The press-type bundling machine was developed by master builder Joh. Simonen in the early 1920s. In 1931, Enso-Gutzeit bought Tornator and added Sampo to its fleet, which already included 7 bundlers, two of which, however, were hand-operated.

In a press-type bundler, there were “boots” made of logs on both sides of the ship, between which the trees to be bundled were floated using log hooks. The “zinc” wires pulled by the bundling winch compress the trees, and on the side of the ship they were then tied into a bundle.

Sampo’s manager was Hugo Laulainen from its completion in 1925 until the early 1960s. In addition to Laulainen and the ship’s mistress, its crew consisted of 14 men. Everyone was involved in the bundling except the hostess and the Captain, who did serve as the foreman. The titles of the rest of the crew were the engineer and assistant, two hookmen, two planks, three bootmen, a summan, a loader, a boom maker, and a tree reader who counted and marked the number of trees, the serial number, and the bundler’s stamp on the bundle. Sampo bundled against both sides, when the bundle had been tied on one side and started to be wired down, the pressing phase began on the other side. The working day usually lasted 10 hours, during which time 164 bundles were made on the best day. However, the normal output was about 120 bundles per day. In the best summer, 15,000 bundles were born. Usually, the entire bundle was completed in about four days. When completed, Sampo was Saimaa’s most efficient bundler, overburden bundlers achieved half as much.

Usually Sampo bundled the whole early summer – often until August – in Muuruvesi on Koivusaari. From there, they moved to Maaninga to Vuohisaari for the rest of the season. If necessary, the ship moved to other places as well. In the autumn, we returned to Savonlinna, where the company’s base was located. There were still bundles if there were bundles. The majority of the crew lived in Sampo, but not all could accommodate, so there was often a housing barge involved, or some lived in nearby farmhouses. There was no sauna at that time, ie washing was done in nearby houses.

In 1954, Sampo was renovated and extended by more than three meters. At the same time, living cabins, a dining area and a sauna were added. This way, the housing barge was no longer needed. Its name also changed, it became “Presser I”. The summer of 1962 was Pressman I’s last term. It remained standing as a reserve ship from Laitaatsilta. In the fall of 1968, it was sold for private use. At the beginning of the 1980s, Press I was being renovated at Laitaatsilla shipyard. However, the shipowner could not afford to pay the shipyard bill, leaving the ship as the property of the shipyard and immediately put up for sale. The ship got new owners in 1984. The ship was thoroughly renovated and renamed Puhois, which is explained as follows: “he (the second owner) fell in love with Kitee and its immediate North Karelians (probably largely due to the 150th anniversary). Puhos had built Finland’s first steamship “Ilmarinen”, and Puhois is the Swedish name for Puhos. Joensuu’s other steamship was also Puhois and Kauka had a tug named after it. ”