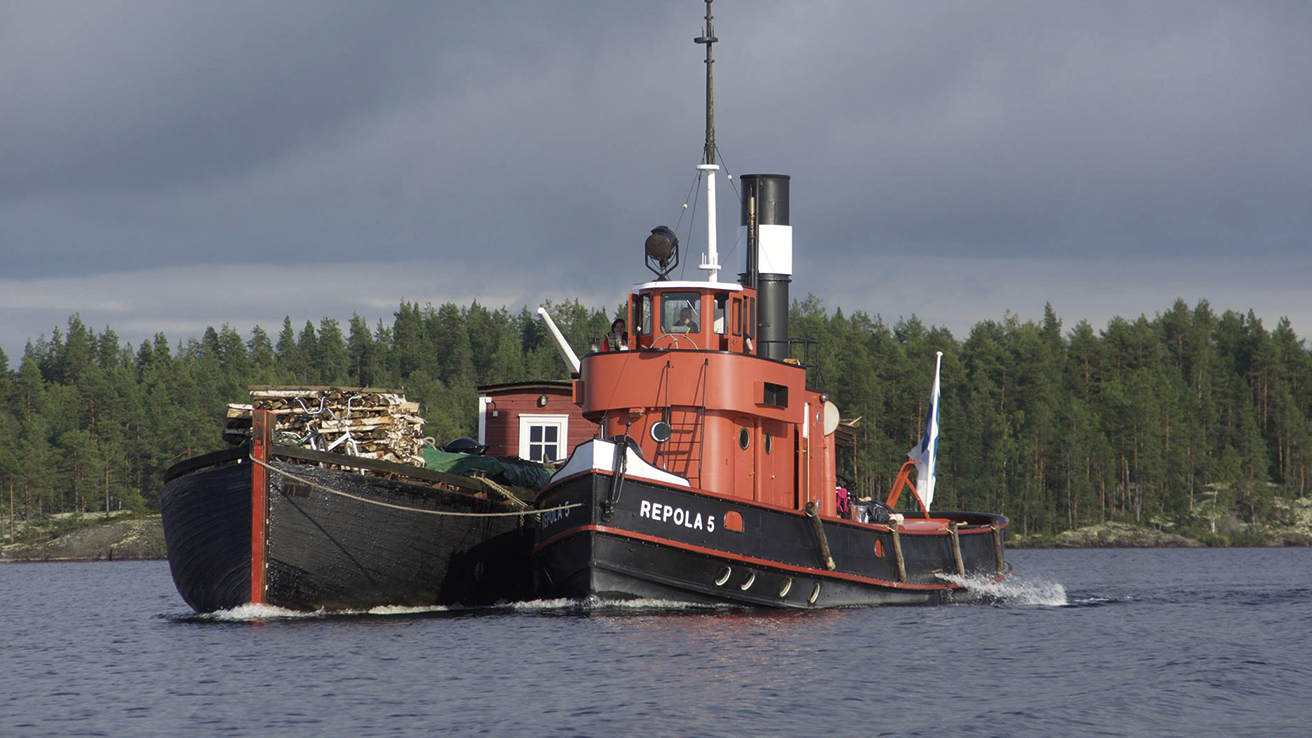 Quite little is known about the first years of Repola 5. The ship was built in Helsinki in 1904 – according to some sources in 1900 – apparently for commuter traffic in the Helsinki region. It was apparently a “deckless” covered 17.3-meter passenger ship. The vessel appears in actual history books in 1907, when it was bought by the newly established Pielavesi Höyryvenhe Cooperative, the purpose of which was to offer an alternative to the “H.G. To Porthan. ” With Iisvesi, the ship was rebuilt. Based on the only photograph known from the time, its sides were raised and a deck was made on it, on which a cabin cabin was placed in the stern of the ship. From there to the bow, the ship was covered almost the entire length of the ship. There was no helm cabin. The helmsman was at the mercy of the wind, but still under a rain canopy. According to the memory, the ship’s original aircraft was a Carlsund-type bending machine with the cylinders in the V position.

The ship, named “Pielavesi”, began operating in August 1907. It operated its Iisvesi-Keitele-Pielavesi route three times a week, in addition to church services on weekends. Despite the competition, the ship did quite well. In 1909, however, an accident occurred. Since its raise, the ship, which was considered a bit flickering, capsized and one passenger drowned. The investigation found the accident to be due to excessive deck cargo, for which the master of the ship was found guilty and sentenced to four months in prison for death. The vessel was not insured, so the case became costly for the company. However, the money was enough to rehabilitate the ship back into service. Whether the accident then affected the ship’s popularity, but in 1912 the Cooperative went bankrupt. Pielavesi was bought at a compulsory auction by Taavetti Tuhkanen, who put the ship to cross the waters of Iisvesi alternately on the Karttula and Niinivedenpää routes. However, the ship’s misfortune continued. Still in the same year it ran badly aground and in the winter it sank to its wintering place. The vessel was lifted and resumed operations in the spring.

Tuhkanen sold the ship to the Iisalmi store in 1916, Kärkkäinen & Putkonen Oy, which turned the ship into a tug. At the same time, the length of the ship became 18.4 meters. It is not known whether the measurement method was different or whether the platform was extended during modifications. In the service of the Iisalmi company, Pielavesi continued its towing until 1935. In 1928 it was renewed: it was extended by four meters (from the original 17.3 meters), it was given a new machine and boiler and a new name “Matti”. From Kärkkäinen & Putkonen, the vessel was transferred to Kojonen & K: ni Oy in Vyborg, which used the vessel in Saimaa. With the acquisitions, Matti passed into the ownership of Repola-Viipuri Oy, later Rauma-Repola Oy, in the 1940s and got a new name, “Repola 5”. In 1954, the Repola 5 got a new boiler and a 148hp machine. Both were used, built in 1921 in Lehtoniemi. They had previously been in Sulka’s “Tapio”, which had been Repola 7 since 1943. The renewed Repola 5 handled the transport of Sulkava and Pikisaari sawmills and the Penttilä sawmill in Joensuu (K1991).

Repola 5 stood still in the 1960s. In the following decade, work began on a museum ship at Rauma-Repola’s Pääskyniemi shipyard. However, work was interrupted during the restructuring of the company, and in 1986 Repola 5 was sold to private ownership. A couple of years later, it was named “P.Roito” according to Pentti Rooit, a founding and honorary member of the Finnish Steam Sail Society. The ship was re-launched. In 1994, the vessel was sold at auction, after which it was renamed Repola 5, and the vessel was put into a representative condition, mainly by work. Today, the ship’s home port is at the Laitaatsilla in Savonlinna.