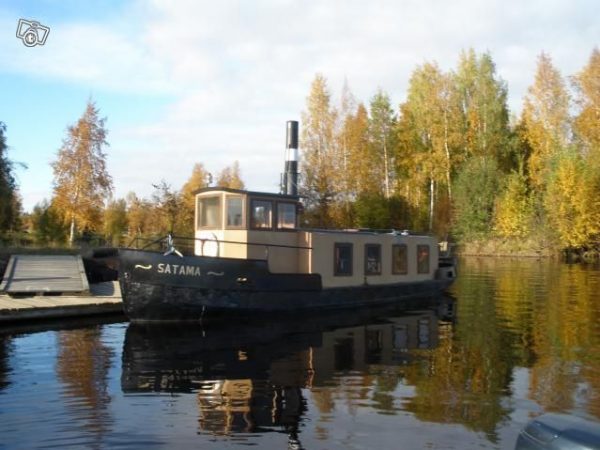 The port was ordered from the Oulu workshop in 1910 by Kaarlo Pekuri, a steam boiler inspector from Raah. The order agreement agreed as follows: “Oulu Machine Shop hereby undertakes to build an open passenger steamer for Mr. Kaarlo Pekur according to the following definition: Total length of the vessel 33-6, maximum breadth over the arc 8’0, deep pass without cargo about 2 feet in the stern and 1’3 all measures of England. ” The power of the steam engine was to be 10 ihv and the boiler, which was a “vertical cylindrical” hot surface of the steam syringe-pan model, was 4.6 square meters and the steam pressure was 8.5 kp. The vessel was to be ready as soon as the ice opened in the spring of 1911 and cost FIM 7,400, one-third of which was paid at the time of the contract.

The ship was completed a couple of months after the late summer of 1911. Pekuri did not acquire it for pleasure, but for commercial traffic to pass traffic between the city of Raahe and its outer port, Lapaluuoto. The passengers were mostly loading staff working there. In addition to shuttle traffic, Satama towed boats, barges and log ferries, assisted cargo ships and whether it was also in various charter traffic. Externally, “Satama” was a typical coverless sluup with a summer roof. It was open, with no salon or other wall structures in it.

Although there were other small ships on the route, the traffic was quite good at first, but when World War II reduced the port’s operations, Pekuri sold its ship to Oulu in 1914. In 1916 it returned to the ownership of Lauri Penzin in Raahe. 1918-19 it was owned by Tornio E. Hytönen. It is a little unclear who owned the ship in the early 1920s, but apparently in 1922 it passed to Raahe Oy, which initially used it to tow the Virpiperä sawmill in Raahe and from 1925 at the Martinniemi sawmill in Haukiputaa. Its main task was to tow sawmill products to cargo ships waiting on the red. The vessel was dieselized in the early 1950s, but its name remained, although the mergers made it owned by Rauma-Repola Oy in 1951. After the dieselization, Satama’s task was to act as an auxiliary tug for the log pool, which it did until the end of its professional traffic.

The motor tug Satama was sold to private ownership in the 1970s. The owner rebuilt the bottom of the ship and changed its appearance by making the cockpit at the back of the plywood a revolving cabin. In 1985 and 1994 the ship changed hands. The new owner had a small steamboat named Pete for a long time (see Pete), and he was now starting to work on the steamer from Satama again. The work was enough because everything needed for steaming had to be procured from different places: a machine built in 1924 at the Pikisaari workshop in Oulu, which had originally been in the Oulu company’s warehouse as a spare machine for tugs before being transferred to the technical school, was found at the Oulu Technical School. The boiler, on the other hand, was a suitable “Cornwall” boiler built in 1952 in Helsinki from the collection of a Collector who owns several boilers in Vaasa. Many other smaller parts had to be hunted before the mechanical engineering was complete. The hull of the harbor was in quite good condition, it was apparently clad during the Eastern Gulf. Instead, all deck structures were rebuilt to resemble small steamers built by the Pikisaari workshop. On June 4, 1999, the Port was launched in Haukiputaa again with steam power. The ship held water, and it also worked: in addition to the test drive, a dozen other runs were made that summer. The ship, which has proven to be stable, has also been driven at sea. The boiler was initially heated with wood, but has since switched to liquefied petroleum gas. The port has three separate burners with their own gas cylinders. However, rehabilitation and alteration of the machine side was extended beyond this.